Due to their constant, random motion, gas molecules diffuse into areas of lower concentration, and effuse through tiny openings.

Explain the concepts of diffusion and effusion.

The kinetic theory describes a gas as a large number of submicroscopic particles (atoms or molecules), all of which are in constant rapid motion that has randomness arising from their many collisions with each other and with the walls of the container.

Diffusion refers to the process of particles moving from an area of high concentration to one of low concentration. The rate of this movement is a function of temperature, viscosity of the medium, and the size (mass) of the particles. Diffusion results in the gradual mixing of materials, and eventually, it forms a homogeneous mixture.

Diffusion: Particles in a liquid-filled beaker are initially concentrated in one area, but diffuse from their area of high concentration to the areas of low concentration until they are distributed evenly throughout the liquid.

Not only do gaseous particles move with high kinetic energy, but their small size enables them to move through small openings as well; this process is known as effusion. For effusion to occur, the hole’s diameter must be smaller than the molecules’ mean free path (the average distance that a gas particle travels between successive collisions with other gas particles). The opening of the hole must be smaller than the mean free path because otherwise, the gas could move back and forth through the hole.

Interactive: Diffusion & Temperature: Explore the role of temperature on the rate of diffusion. Set the temperature, then remove the barrier, and measure the amount of time it takes the blue molecules to reach the gas sensor. When the gas sensor has detected three blue molecules, it will stop the experiment. Compare the diffusion rates at low, medium and high temperatures. Trace an individual molecule to see the path it takes.

Interactive: Diffusion and Molecular Mass: Explore the role of a molecule’s mass with respect to its diffusion rate.

Scottish chemist Thomas Graham experimentally determined that the ratio of the rates of effusion for two gases is equal to the square root of the inverse ratio of the gases’ molar masses. This is written as follows:

where M represents the molar mass of the molecules of each of the two gases.

The gases’ effusion rate is directly proportional to the average velocity at which they move; a gas is more likely to pass through an orifice if its particles are moving at faster speeds.

What is the ratio of the rate of effusion of ammonia, NH3, to that of hydrogen chloride, HCl?

The NH3 molecules effuse at a rate 1.46 times faster than HCl molecules.

The rate of effusion is determined by the number of molecules that diffuse through the hole in a unit of time, and therefore by the average molecular velocity of the gas molecules.

While diffusion transports materials across membranes and within cells, osmosis transports only water across a membrane. The semipermeable membrane limits the diffusion of solutes in the water. Not surprisingly, the aquaporin proteins that facilitate water movement play a large role in osmosis, most prominently in red blood cells and the membranes of kidney tubules. 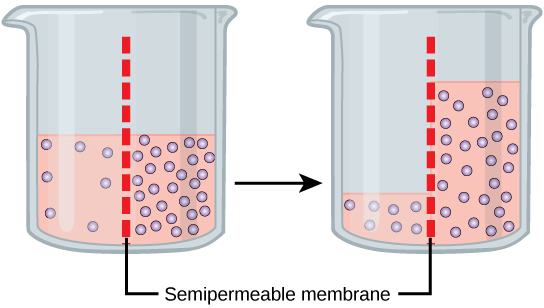 Osmosis: In osmosis, water always moves from an area of higher water concentration to one of lower concentration. In the diagram shown, the solute cannot pass through the selectively permeable membrane, but the water can.