Energy Use and the Environment

Most of the world’s energy resources are from the conversion of the sun’s rays to other energy forms after being incident upon the planet. Some of that energy has been preserved as fossil energy and some is directly or indirectly usable, such as via wind, hydro- or wave power.

The amount of energy the sun provides has been measured by satellite to be roughly 1368 watts per square meter, although this amount fluctuates by about 6.9% during the year due to the Earth’s varying distance from the sun. This value represents the total rate of solar power received by the planet, although only about half, 89 PW (PW = petawatt, which is equivalent to 1015 watts; a watt is equal to J/s), reaches the Earth’s surface. The estimates for remaining non-renewable worldwide energy resources vary; the remaining fossil fuels total an estimated 0.4 YJ (1 YJ = yottajoule, or 1024 J) and the the energy available from nuclear fuels such as uranium exceeds 2.5 YJ. Fossil fuels range from 0.6 to 3 YJ, if estimates of reserves of methane clathrates (methane gas trapped in ice deposits on the ocean floor and in Antarctic ice cores) are accurate, and if these methane clathrates could become technically extractable. The total energy flux from the sun is 3.8 YJ/yr, which dwarfs all non-renewable resources.

Global energy use by source, 2010: Fossil fuels remain our primary source of energy. Renewable energy sources only comprised 16.7% of our energy in 2010.

Coal fueled the industrial revolution in the 18th and 19th centuries. However, with the advent of the automobile, airplanes, and the growing use of electricity among consumers, oil became the dominant fuel during the 20th century. The growth of oil as the largest fossil fuel was further enabled by steadily dropping prices from 1920 until 1973. However, after the oil shocks of 1973 and 1979, during which the price of oil increased from $5 to $45 per barrel, there was a shift away from this particular resource. Nowadays, coal, natural gas, and nuclear power are the most popular fuels for electricity generation.

Recent conservation measures have greatly increased energy efficiency. In the U.S., the average car has more than doubled the number of miles per gallon. Japan, which bore the brunt of the oil shocks, has also made spectacular improvements to its technology. Now Japan has the highest energy efficiency in the world.

As of December 2009, the world had 436 nuclear reactors. Since commercial nuclear energy began in the mid 1950’s, 2008 was the first year that no new nuclear power plant was connected to the grid, although two were connected in 2009. Annual generation of nuclear power has been on a slight downward trend since 2007, decreasing 1.8% in 2009 with nuclear power still meeting 13–14% of the world’s electricity demand. 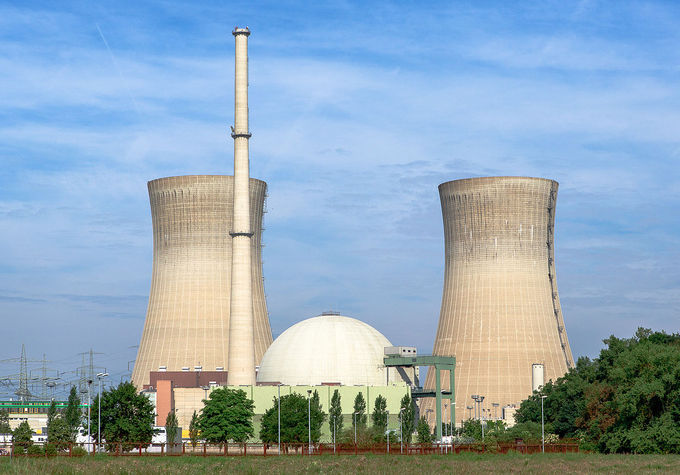 Nuclear power plant in Germany: Nuclear (fission) power stations, excluding the contribution from naval nuclear fission reactors, provided about 5.7% of the world’s energy and 13% of the world’s electricity in 2012.

Discuss energy consumption and its relationship with global warming

The environmental impact of the energy industry is diverse. Energy has been harnessed by humans for millennia. Initially, we used fire for light, heat, cooking, and safety. The use of fire can be traced back at least 1.9 million years. In recent years, however, there has been a trend towards the increased commercialization of various renewable energy sources.

Wind turbines in Columbia: A wind turbine is a device that converts the natural kinetic energy from the wind into electrical power. Wind turbines provide a green source of alternative energy, as opposed to the burning of fossil fuels which contributes to climate change.

Consumption of fossil fuel resources has led to global warming and climate change. In most parts of the world, little effort is being made to slow these changes. If we reach (or have already reached) a maximum rate of petroleum extraction, then fossil fuels will no longer be a viable source of energy. However, if we explore viable alternative energy resources, we could reduce our impact on the environment.

Newly emerging technologies could lead to more efficient energy generation, which could temper environmental damage. The use of these new methods incorporate practices that are informed by new paradigms such as systems ecology and industrial ecology.

The Future Costs of Fossil Fuels

There is a highly publicized denial of climate change, but the vast majority of scientists working in climatology accept that it is due to human activity. The IPCC report “Climate Change 2007: Climate Change Impacts, Adaptation, and Vulnerability,” predicts that climate change will cause shortages of food and water, as well as increase flooding that will affect billions of people. Those living in poverty will be most affected.

Similarly, the same research study, known as ExternE, or “Externalities of Energy,” which was undertaken over the period from 1995 to 2005, found that the cost of producing electricity from coal or oil would double over its present value. The cost of electricity production from gas would increase by 30% if external costs such as damage to the environment and to human health, from the airborne particulate matter, nitrogen oxides, chromium VI, and arsenic emissions produced by these sources, were taken into account. It was estimated in the study that these external downstream fossil fuel costs amount up to 1%-2% of the EU’s entire gross domestic product (GDP); this was before the external cost of global warming from these sources was even included. The study also found that the environmental and health costs of nuclear power, per unit of energy delivered, was €0.0019/kWh, which was found to be lower than that of many renewable sources including biomass and photovoltaic solar panels. It was 30 times lower than coal at €0.06/kWh, or 6 cents/kWh. The energy source with the lowest associated external environmental and health costs was wind power at €0.0009/kWh.

One of the major environmental problems associated with fossil fuel use is global warming.

Relate fossil fuels to an increase in the earth’s temperature

One of the biggest environmental problems associated with fossil fuel use is global warming, which is the rise in the average temperature of Earth’s atmosphere and oceans since the late 19th century. Since the early 20th century, Earth’s mean surface temperature has increased by about 0.8 °C (1.4 °F), with about two-thirds of the increase occurring since 1980. This warning of the climate system is unequivocal, and scientists are now more than 90% certain that it is primarily caused by increasing concentrations of greenhouse gases produced by human activities such as deforestation and the burning of fossil fuels. These findings are recognized by the national science academies of all major industrialized nations.

Climate model projections were summarized in the 2007 Fourth Assessment Report (AR4) by the Intergovernmental Panel on Climate Change (IPCC). They indicated that during the 21st century, the global surface temperature is likely to rise another 1.1 to 2.9 °C (2 to 5.2 °F) for their lowest emissions scenario, and 2.4 to 6.4 °C (4.3 to 11.5 °F) for their highest. The ranges of these estimates arise from the use of models with differing sensitivity to greenhouse gas concentrations.

According to AR4, warming and related changes will vary from region to region around the globe. The effects of an increase in global temperature include a rise in sea levels, a change in the amount and pattern of precipitation, and a probable expansion of subtropical deserts. Warming is expected to be strongest in the Arctic and would be associated with the continuing retreat of glaciers, permafrost, and sea ice. Other likely effects of global warming include a more frequent occurrence of extreme weather events such as heat waves, droughts, and heavy rainfall. Ocean acidification will worsen, and there will also be species extinctions due to shifting temperature regimes. Effects significant to humans include the threat to food security from decreasing crop yields, as well as the loss of habitat from flooding.

Arctic sea ice loss: This time series, based on satellite data, shows the annual Arctic sea ice minimum since 1979. It shows a steady decrease over time; the September 2010 extent was the third lowest in the satellite record.

Proposed policy responses to global warming include mitigation by emissions reduction, adaptation to its effects, and possible future geoengineering. Most countries are parties to the United Nations Framework Convention on Climate Change (UNFCCC), whose ultimate objective is to prevent dangerous anthropogenic climate change. Parties to the UNFCCC have adopted a range of policies designed to reduce greenhouse gas emissions and to assist in adaptation to global warming. This group has agreed that deep cuts in emissions are required, and that future global warming should be limited to below 2.0 °C (3.6 °F) relative to the pre-industrial level. Reports published in 2011 by the United Nations Environment Programme and the International Energy Agency suggest that efforts as of the early 21st century to reduce emissions may be inadequate to meet the UNFCCC’s 2.0 °C target.

Alternative and renewable energy sources can reduce the environmental impact of energy production and consumption.

Renewable energy is energy that comes from natural resources, such as sunlight, wind, rain, tides, waves, and geothermal heat, which are all naturally replenished. About 16% of global final energy consumption comes from renewable sources, with 10% coming from traditional biomass, which is the burning of natural materials such as wood, corn, and some types of garbage to provide energy mainly used for heating, and 3.4% from hydroelectricity. New renewables (small hydro, modern biomass, wind, solar, geothermal, and biofuels) account for another 3% and are growing very rapidly. The share of renewables in electricity generation is around 19%, with 16% of global electricity coming from hydroelectricity, and 3% from new renewable sources. 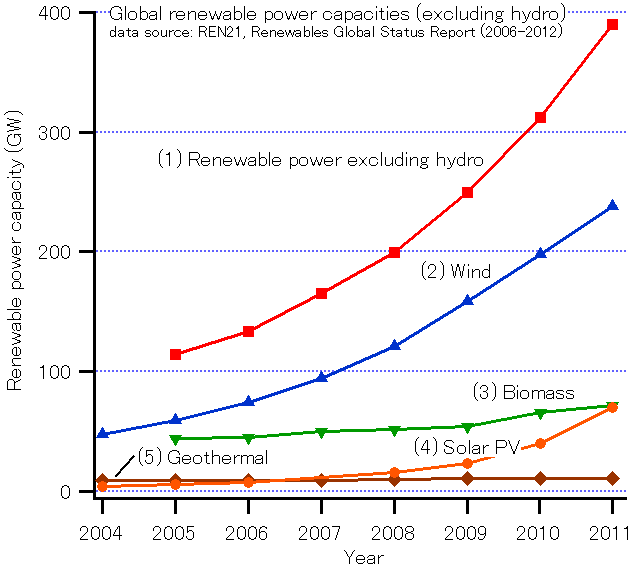 Global energy capacity expansion by renewable source: Total renewable power capacity has been increasing over the past several years, from roughly 100 GW in 2005 to nearly 400 GW in 2007.

The use of wind power is increasing at an annual rate of 20%. At the end of 2011, a worldwide installed capacity of 238,000 megawatts (MW) was in use widely throughout Europe, Asia, and the United States. Since 2004, photovoltaics (solar cells) surpassed wind as the fastest growing energy source, and since 2007, the use of solar power has more than doubled every two years. At the end of 2011, the photovoltaic (PV) capacity worldwide was 67,000 MW. PV power stations are becoming increasingly popular in Germany and Italy. In addition, solar thermal power stations, which are power plants that generate electricity from the heat of the sun’s rays, operate in the USA and Spain. The largest of these is the 354 MW SEGS power plant located in the Mojave Desert. The world’s largest geothermal power installation is the Geysers complex in California, with a rated capacity of 750 MW. Brazil has one of the largest renewable energy programs in the world, involving production of ethanol fuel from sugarcane. Ethanol now provides 18% of the country’s automotive fuel. Ethanol fuel is also widely available in the USA. 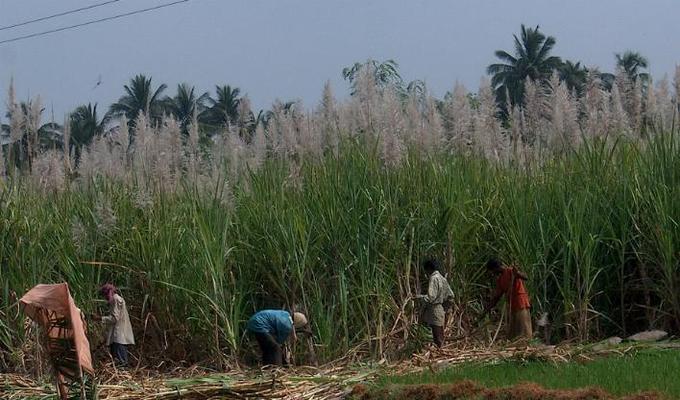 Sugarcane being harvested for ethanol production: Ethanol is a quasi-renewable energy source. This is because, while the energy is partially generated by non-depletable sunlight, the harvesting process requires vast amounts of energy that typically comes from non-renewable sources.

While many renewable energy projects are large-scale, renewable technologies can also be suited to rural and remote areas, where energy is often crucial in human development. As of 2011, small solar PV systems provide electricity to a few million households, and micro-hydroelectricity plants configured into mini-grids serve many more. Over 44 million households use biogas (mixtures of gases produced by the breakdown of organic matter) made in household-scale digesters for lighting and/or cooking, and more than 166 million households rely on a new generation of more efficient biomass cookstoves.

The Future of Alternative Energy

Climate change concerns, coupled with high oil prices, peak oil, and increasing government support, are driving more and more renewable energy legislation, incentives and commercialization. New government spending, regulation and policies are helping the industry weather the global financial crisis better than many other sectors. According to a 2011 projection by the International Energy Agency, solar power generators may produce most of the world’s electricity within 50 years, dramatically reducing the emissions of greenhouse gases that harm the environment.