Explain the cause of a dipole-dipole force.

Intermolecular forces are the forces of attraction or repulsion which act between neighboring particles (atoms, molecules, or ions ). These forces are weak compared to the intramolecular forces, such as the covalent or ionic bonds between atoms in a molecule. For example, the covalent bond present within a hydrogen chloride (HCl) molecule is much stronger than any bonds it may form with neighboring molecules.

An electric monopole is a single charge, while a dipole is two opposite charges closely spaced to each other. Molecules that contain dipoles are called polar molecules and are very abundant in nature. For example, a water molecule (H2O) has a large permanent electric dipole moment. Its positive and negative charges are not centered at the same point; it behaves like a few equal and opposite charges separated by a small distance. These dipole-dipole attractions give water many of its properties, including its high surface tension.

The permanent dipole in water is caused by oxygen ‘s tendency to draw electrons to itself (i.e. oxygen is more electronegative than hydrogen). The 10 electrons of a water molecule are found more regularly near the oxygen atom’s nucleus, which contains 8 protons. As a result, oxygen has a slight negative charge (δ-). Because oxygen is so electronegative, the electrons are found less regularly around the nucleus of the hydrogen atoms, which each only have one proton. As a result, hydrogen has a slight positive charge (δ+). 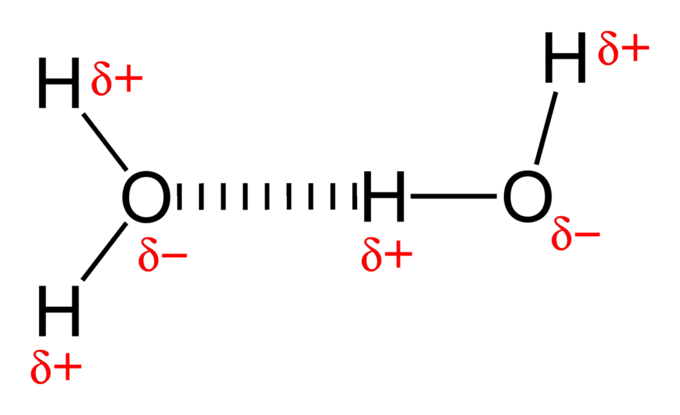 Molecules often contain polar bonds because of electronegativity differences but have no overall dipole moment if they are symmetrical. For example, in the molecule tetrachloromethane (CCl4), the chlorine atoms are more electronegative than the carbon atoms, and the electrons are drawn toward the chlorine atoms, creating dipoles. However, these carbon-chlorine dipoles cancel each other out because the molecular is symmetrical, and CCl4 has no overall dipole movement.

Interactive: Polarity and Attractive Strength: Attractions between polar molecules vary. Choose a pair of molecules from the drop-down menu and “pull” on the star to separate the molecules. Why does polarity have an effect on the strength of attraction between molecules?

Hydrogen bonds are a type of dipole-dipole interactions that occur between hydrogen and either nitrogen, fluorine, or oxygen. Hydrogen bonds are incredibly important in biology, because hydrogen bonds keep the DNA bases paired together, helping DNA maintain its unique structure.

Dipole Forces – YouTube: In this video, Paul Andersen describes the intermolecular forces associated with dipoles. A dipole is a molecule that has split charge. Dipoles may form associations with other dipoles, induced dipoles or ions. An important type of dipole-dipole forces are hydrogen bonds.

A hydrogen bond is a strong intermolecular force created by the relative positivity of hydrogen atoms.

Describe the properties of hydrogen bonding.

A hydrogen bond is the electromagnetic attraction created between a partially positively charged hydrogen atom attached to a highly electronegative atom and another nearby electronegative atom. A hydrogen bond is a type of dipole-dipole interaction; it is not a true chemical bond. These attractions can occur between molecules (intermolecularly) or within different parts of a single molecule (intramolecularly).

Hydrogen bonding in water: This is a space-filling ball diagram of the interactions between separate water molecules.

A hydrogen attached to carbon can also participate in hydrogen bonding when the carbon atom is bound to electronegative atoms, as is the case in chloroform (CHCl3). As in a molecule where a hydrogen is attached to nitrogen, oxygen, or fluorine, the electronegative atom attracts the electron cloud from around the hydrogen nucleus and, by decentralizing the cloud, leaves the hydrogen atom with a positive partial charge. 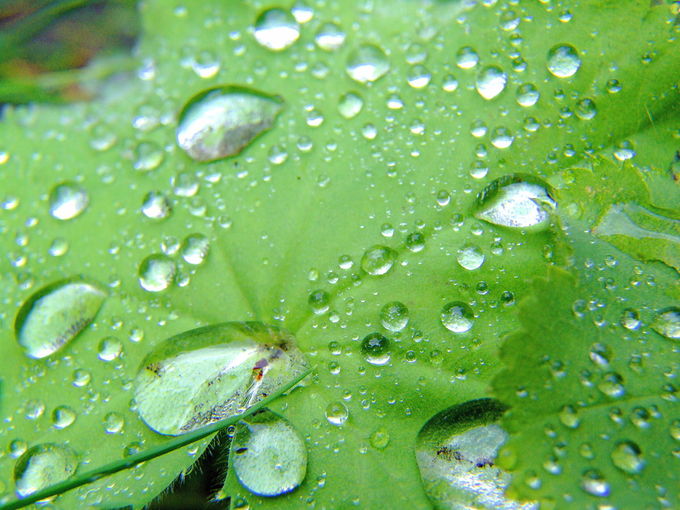 The ion-dipole force is an intermolecular attraction between an ion and a polar molecule.

Discuss the characteristics of dispersion forces.

Temporary dipoles are created when electrons, which are in constant movement around the nucleus, spontaneously come into close proximity. This uneven distribution of electrons can make one side of the atom more negatively charged than the other, thus creating a temporary dipole, even on a non-polar molecule. The more electrons there are in an atom, the further away the shells are from the nucleus; thus, the electrons can become lopsided more easily, and these forces are stronger and more frequent. These intermolecular forces are also sometimes called “induced dipole-induced dipole” or “momentary dipole” forces.

Interactive: Charged and Neural Atoms: There are two kinds of attractive forces shown in this model: Coulomb forces (the attraction between ions) and Van der Waals forces (an additional attractive force between all atoms). What kinds of patterns tend to form with charged and neutral atoms? How does changing the Van der Waals attraction or charging the atoms affect the melting and boiling point of the substance?

Interactive: Comparing Dipole-Dipole to London Dispersion: Investigate the difference in the attractive force between polar and non-polar molecules.

Interactive: Factors Affecting London Dispersion Attractions: Explore the role of size and shape in the strength of London dispersion attractions.

Van der Waals forces help explain how nitrogen can be liquefied. Nitrogen gas (N2) is diatomic and non-polar because both nitrogen atoms have the same degree of electronegativity. If there are no dipoles, what would make the nitrogen atoms stick together to form a liquid? London dispersion forces allow otherwise non-polar molecules to have attractive forces. However, they are by far the weakest forces that hold molecules together. 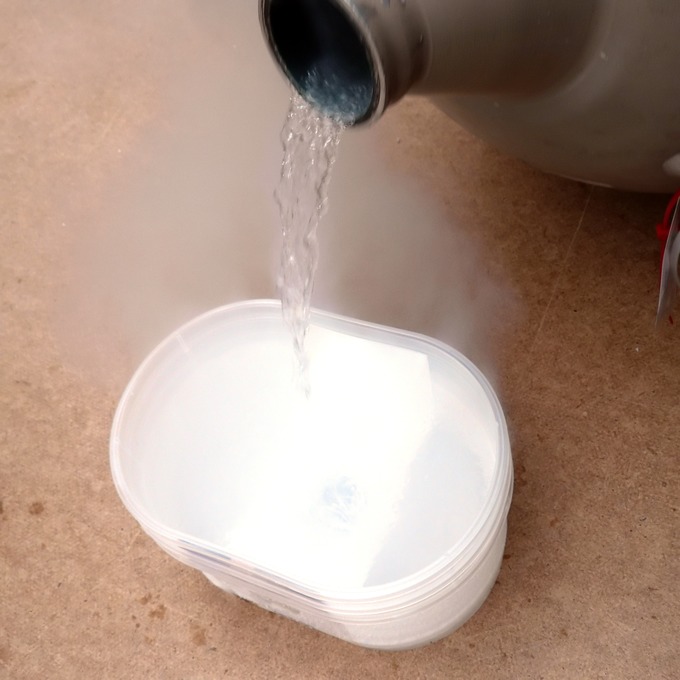