Kinetic Molecular Theory explains the macroscopic properties of gases and can be used to understand and explain the gas laws.

Express the five basic assumptions of the Kinetic Molecular Theory of Gases.

Charles’ Law states that at constant pressure, the volume of a gas increases or decreases by the same factor as its temperature. This can be written as:

According to Kinetic Molecular Theory, an increase in temperature will increase the average kinetic energy of the molecules. As the particles move faster, they will likely hit the edge of the container more often. If the reaction is kept at constant pressure, they must stay farther apart, and an increase in volume will compensate for the increase in particle collision with the surface of the container.

Boyle’s Law states that at constant temperature, the absolute pressure and volume of a given mass of confined gas are inversely proportional. This relationship is shown by the following equation:

The Kinetic Molecular Theory of Gas (part 1) – YouTube: Reviews kinetic energy and phases of matter, and explains the kinetic-molecular theory of gases.

The Maxwell-Boltzmann Distribution describes the average molecular speeds for a collection of gas particles at a given temperature.

Identify the relationship between velocity distributions and temperature and molecular weight of a gas.

According to the Kinetic Molecular Theory, all gaseous particles are in constant random motion at temperatures above absolute zero. The movement of gaseous particles is characterized by straight-line trajectories interrupted by collisions with other particles or with a physical boundary. Depending on the nature of the particles’ relative kinetic energies, a collision causes a transfer of kinetic energy as well as a change in direction.

Measuring the velocities of particles at a given time results in a large distribution of values; some particles may move very slowly, others very quickly, and because they are constantly moving in different directions, the velocity could equal zero. (Velocity is a vector quantity, equal to the speed and direction of a particle) To properly assess the average velocity, average the squares of the velocities and take the square root of that value. This is known as the root-mean-square (RMS) velocity, and it is represented as follows:

In the above formula, R is the gas constant, T is absolute temperature, and Mm is the molar mass of the gas particles in kg/mol.

Consider a closed system of gaseous particles with a fixed amount of energy. With no external forces (e.g. a change in temperature) acting on the system, the total energy remains unchanged. In theory, this energy can be distributed among the gaseous particles in many ways, and the distribution constantly changes as the particles collide with each other and with their boundaries. Given the constant changes, it is difficult to gauge the particles’ velocities at any given time. By understanding the nature of the particle movement, however, we can predict the probability that a particle will have a certain velocity at a given temperature.

Interactive: Diffusion & Molecular Mass: Explore the role of molecular mass on the rate of diffusion. Select the mass of the molecules behind the barrier. Remove the barrier, and measure the amount of time it takes the molecules to reach the gas sensor. When the gas sensor has detected three molecules, it will stop the experiment. Compare the diffusion rates of the lightest, heavier and heaviest molecules. Trace an individual molecule to see the path it takes.

Using the above logic, we can hypothesize the velocity distribution for a given group of particles by plotting the number of molecules whose velocities fall within a series of narrow ranges. This results in an asymmetric curve, known as the Maxwell-Boltzmann distribution. The peak of the curve represents the most probable velocity among a collection of gas particles. 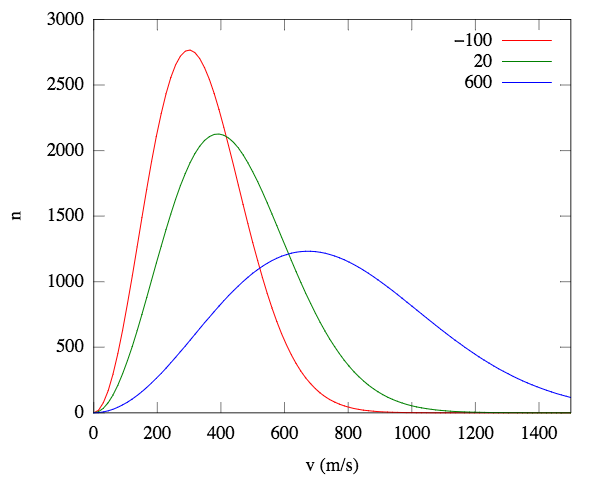 Effect of temperature on root-mean-square speed distributions: As the temperature increases, so does the average kinetic energy (v), resulting in a wider distribution of possible velocities. n = the fraction of molecules.

Larger molecular weights narrow the velocity distribution because all particles have the same kinetic energy at the same temperature. Therefore, by the equation [latex]KE=\frac{1}{2}mv^2[/latex], the fraction of particles with higher velocities will increase as the molecular weight decreases.

The root-mean-square speed measures the average speed of particles in a gas, defined as [latex]v_{rms}=\sqrt{\frac{3RT}{M}}[/latex].

Recall the mathematical formulation of the root-mean-square velocity for a gas.

According to Kinetic Molecular Theory, gaseous particles are in a state of constant random motion; individual particles move at different speeds, constantly colliding and changing directions. We use velocity to describe the movement of gas particles, thereby taking into account both speed and direction.

Although the velocity of gaseous particles is constantly changing, the distribution of velocities does not change. We cannot gauge the velocity of each individual particle, so we often reason in terms of the particles’ average behavior. Particles moving in opposite directions have velocities of opposite signs. Since a gas’ particles are in random motion, it is plausible that there will be about as many moving in one direction as in the opposite direction, meaning that the average velocity for a collection of gas particles equals zero; as this value is unhelpful, the average of velocities can be determined using an alternative method.

By squaring the velocities and taking the square root, we overcome the “directional” component of velocity and simultaneously acquire the particles’ average velocity. Since the value excludes the particles’ direction, we now refer to the value as the average speed. The root-mean-square speed is the measure of the speed of particles in a gas, defined as the square root of the average velocity-squared of the molecules in a gas.

It is represented by the equation: [latex]v_{rms}=\sqrt{\frac{3RT}{M}}[/latex], where vrms is the root-mean-square of the velocity, Mm is the molar mass of the gas in kilograms per mole, R is the molar gas constant, and T is the temperature in Kelvin.

The root-mean-square speed takes into account both molecular weight and temperature, two factors that directly affect the kinetic energy of a material.