Lewis symbols use dots to visually represent the valence electrons of an atom.

An atom consists of a positively charged nucleus and negatively charged electrons. The electrostatic attraction between them keeps electrons ‘bound’ to the nucleus so they stay within a certain distance of it. Careful investigations have shown that not all electrons within an atom have the same average position or energy. We say the electrons ‘reside’ in different principal energy levels, and these levels exist at different radii from the nucleus and have rules regarding how many electrons they can accommodate. 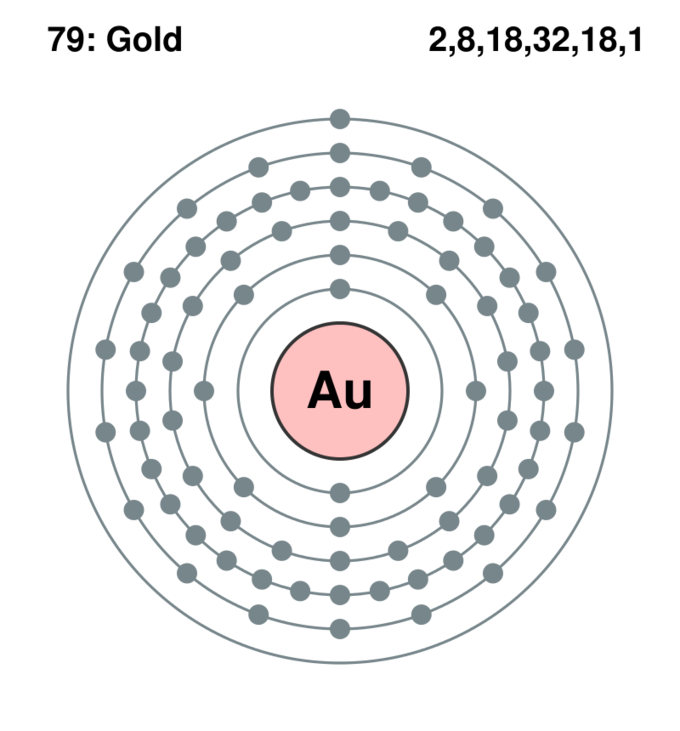 The outermost principal energy level is of great interest in chemistry because the electrons it holds are the furthest away from the nucleus, and therefore are the ones most loosely held by its attractive force; the larger the distance between two charged objects, the smaller the force they exert on each other. Chemical reactivity of all of the different elements in the periodic table depends on the number of electrons in that last, outermost level, called the valence level or valence shell. In the case of gold, there is only one valence electron in its valence level.

Atoms gain, lose, or share electrons in their valence level in order to achieve greater stability, or a lower energy state. From this perspective, bonds between atoms form so that the bonded atoms are in a lower energy state compared to when they were by themselves. Atoms can achieve this more stable state by having a valence level which contains as many electrons as it can hold. For the first principal energy level, having two electrons in it is the most stable arrangement, while for all other levels outside of the first, eight electrons are necessary to achieve the most stable state.

The Lewis symbol for carbon: Each of the four valence electrons is represented as a dot.

Electrons that are not in the valence level are not shown in the Lewis symbol. The reason for this is that the chemical reactivity of an atom of the element is solely determined by the number of its valence electrons, and not its inner electrons. Lewis symbols for atoms are combined to write Lewis structures for compounds or molecules with bonds between atoms.

The Lewis symbol for an atom depicts its valence electrons as dots around the symbol for the element.

Determining the Number of Valence Electrons

Periodic table of the elements: Group numbers shown by Roman numerals (above the table) tell us how many valence electrons there are for each element.

Some periodic tables list the group numbers in Arabic numbers instead of Roman numerals. In that case, the transition metal groups are included in the counting and the groups indicated at the top of the periodic table have numbers 1, 2, 13, 14, 15, 16, 17, 18. The corresponding roman numerals used are I, II, III, IV, V, VI, VII, VIII.

Survey of the Groups in the Periodic Table

The middle part of the periodic table that contains the transition metals is skipped in this process for reasons having to do with the electronic configuration of these elements.

Proceeding to the column labeled ‘III’, we find that those elements (B, Al, Ga, In,…) have three valence electrons in their outermost or valence level.

We can continue this inspection of the groups until we reach the eighth and final column, in which the most stable elements are listed. These are all gaseous under normal conditions of temperature and pressure, and are called ‘noble gases.’ Neon (Ne), argon (Ar), krypton (Kr), etc., each contain eight electrons in their valence level. Therefore, these elements have a full valence level that has the maximum number of electrons possible. Helium (He), at the very top of this column is an exception because it has two valence electrons; its valence level is the first principal energy level which can only have two electrons, so it has the maximum number of electrons in its valence level as well.

The noble gases represent elements of such stability that they are not chemically reactive, so they can be called inert. In other words, they don’t need to bond with any other elements in order to attain a lower energy configuration. We explain this phenomenon by attributing their stability to having a ‘full’ valence level.

The significance in understanding the nature of the stability of noble gases is that it guides us in predicting how other elements will react in order to achieve the same electronic configuration as the noble gases by having a full valence level.

Once you can draw a Lewis symbol for an atom, you can use the knowledge of Lewis symbols to create Lewis structures for molecules.

Valence Electrons and the Periodic Table: Electrons can inhabit a number of energy shells. Different shells are different distances from the nucleus. The electrons in the outermost electron shell are called valence electrons, and are responsible for many of the chemical properties of an atom. This video will look at how to find the number of valence electrons in an atom depending on its column in the periodic table.

In covalent molecules, atoms share pairs of electrons in order to achieve a full valence level.

Noble gases like He, Ne, Ar, Kr, etc., are stable because their valence level is filled with as many electrons as possible. Eight electrons fill the valence level for all noble gases, except helium, which has two electrons in its full valence level. Other elements in the periodic table react to form bonds in which valence electrons are exchanged or shared in order to achieve a valence level which is filled, just like in the noble gases. We refer to this chemical tendency of atoms as ‘the octet rule,’ and it guides us in predicting how atoms combine to form molecules and compounds.

The simplest example to consider is hydrogen (H), which is the smallest element in the periodic table with one proton and one electron. Hydrogen can become stable if it achieves a full valence level like the noble gas that is closest to it in the periodic table, helium (He). These are exceptions to the octet rule because they only require 2 electrons to have a full valence level.

Two H atoms can come together and share each of their electrons to create a ‘ covalent bond.’ The shared pair of electrons can be thought of as belonging to either atom, and thus each atom now has two electrons in its valence level, like He. The molecule that results is H2, and it is the most abundant molecule in the universe.

Lewis structure of diatomic hydrogen: This is the process through which the H2 molecule is formed. Two H atoms, each contributing an electron, share a pair of electrons. This is known as a ‘single covalent bond.’ Notice how the two electrons can be found in a region of space between the two atomic nuclei.

The Lewis formalism used for the H2 molecule is H:H or H—H. The former, known as a ‘Lewis dot diagram,’ indicates a pair of shared electrons between the atomic symbols, while the latter, known as a ‘Lewis structure,’ uses a dash to indicate the pair of shared electrons that form a covalent bond. More complicated molecules are depicted this way as well. 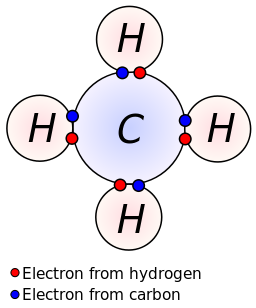 Lewis dot dragram for methane: Methane, with molecular formula CH4, is shown. The electrons are color-coded to indicate which atoms they belonged to before the covalent bonds formed, with red representing hydrogen and blue representing carbon. Four covalent bonds are formed so that C has an octet of valence electrons, and each H has two valence electrons—one from the carbon atom and one from one of the hydrogen atoms.

Now consider the case of fluorine (F), which is found in group VII (or 17) of the periodic table. It therefore has 7 valence electrons and only needs 1 more in order to have an octet. One way that this can happen is if two F atoms make a bond, in which each atom provides one electron that can be shared between the two atoms. The resulting molecule that is formed is F2, and its Lewis structure is F—F. 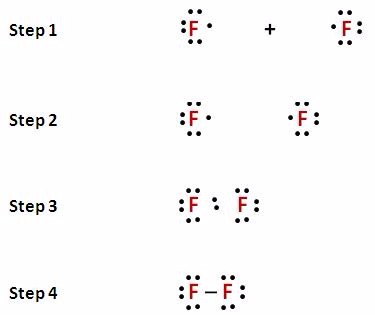 Achieving an octet of valence electrons: Two fluorine atoms are able to share an electron pair, which becomes a covalent bond. Notice that only the outer (valence level) electrons are involved, and that in each F atom, 6 valence electrons do not participate in bonding. These are ‘lone pairs’ of electrons.

After a bond has formed, each F atom has 6 electrons in its valence level which are not used to form a bond. These non-bonding valence electrons are called ‘lone pairs’ of electrons and should always be indicated in Lewis diagrams.

Lewis structure of acetic acid: Acetic acid, CH3COOH, can be written out with dots indicating the shared electrons, or, preferably, with dashes representing covalent bonds. Notice the lone pairs of electrons on the oxygen atoms are still shown. The methyl group carbon atom has six valence electrons from its bonds to the hydrogen atoms because carbon is more electronegative than hydrogen. Also, one electron is gained from its bond with the other carbon atom because the electron pair in the C−C bond is split equally.

We have looked at how to determine Lewis structures for simple molecules. The procedure is as follows:

Alternate view of lewis dot structure of water: This arrangement of shared electrons between O and H results in the oxygen atom having an octet of electrons, and each H atom having two valence electrons.

Multiple bonds can also form between elements when two or three pairs of electrons are shared to produce double or triple bonds, respectively. The Lewis structure for carbon dioxide, CO2, is a good example of this.

Lewis structure of carbon dioxide: This figure explains the bonding in a CO2 molecule. Each O atom starts out with six (red) electrons and C with four (black) electrons, and each bond behind an O atom and the C atom consists of two electrons from the O and two of the four electrons from the C.

The Lewis structure of an ion is placed in brackets and its charge is written as a superscript outside of the brackets, on the upper right.

Apply the rules for drawing Lewis structures to polyatomic ions

Lewis structures for polyatomic ions are drawn by the same methods that we have already learned. When counting electrons, negative ions should have extra electrons placed in their Lewis structures; positive ions should have fewer electrons than an uncharged molecule. When the Lewis structure of an ion is written, the entire structure is placed in brackets, and the charge is written as a superscript on the upper right, outside of the brackets. For example, consider the ammonium ion, NH4+, which contains 9 (5 from N and 1 from each of the four H atoms) –1 = 8 electrons. One electron is subtracted because the entire molecule has a +1 charge. 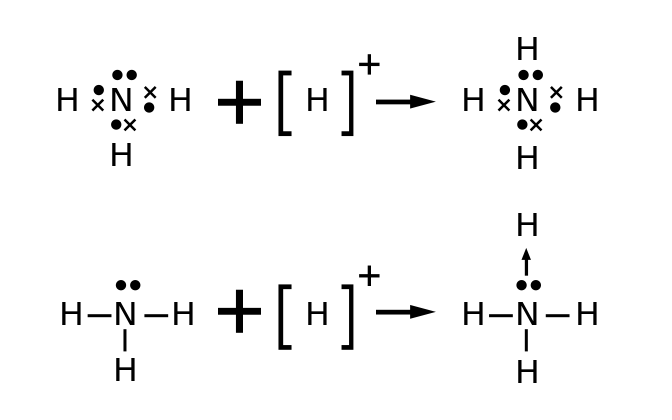 Negative ions follow the same procedure. The chlorite ion, ClO2–, contains 19 (7 from the Cl and 6 from each of the two O atoms) +1 = 20 electrons. One electron is added because the entire molecule has a -1 charge.