Occurrence and Properties of Metals

Most pure metals are either too soft, brittle, or chemically reactive for practical use, and few pure metals occur naturally.

Describe the characteristics of metal alloys and the natural occurence of native metals.

A native metal is any metal that is found in its metallic form in nature, either pure or as an alloy. Metals that can be found as native deposits singly and/or in alloys include antimony, arsenic, bismuth, cadmium, chromium, cobalt, indium, iron, nickel, selenium, tantalum, tellurium, tin, titanium, and zinc.

Two groups of metals can also be found in nature: the gold group and the platinum group. 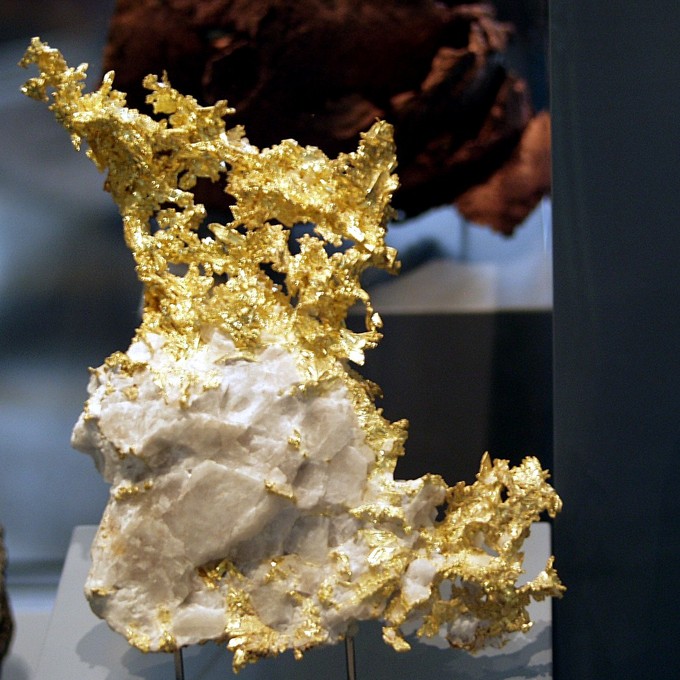 Only gold, silver, copper and the platinum metals occur in nature in larger amounts. Over geological time scales, very few metals can resist natural weathering processes like oxidation. This is why only the less reactive metals such as gold and platinum are found as native metals. The others usually occur as isolated pockets where a natural chemical process reduces a common compound or ore of the metal. This leaves the pure metal behind as small flakes or inclusions.

Native metals were prehistoric man’s only access to metal. The process of extracting metals from their ores (called smelting) is thought to have been discovered around 6500 BC. However, these metals could be found only in relatively small amounts, so they could not be used extensively. So while copper and iron were known well before the Copper Age and Iron Age, they would not have a large impact on humankind until the technology to smelt them from their ores, and thus mass-produce them, appeared.

An alloy is a mixture of two or more elements in solid solution in which the major component is a metal. Most pure metals are either too soft, brittle, or chemically reactive for practical use. Combining different ratios of metals as alloys modifies the properties of pure metals to produce desirable characteristics. The aim of making alloys is generally to make the metals less brittle, harder, or more resistant to corrosion, or to improve their color or luster.

Of all the metallic alloys in use today, the alloys of iron (steel, stainless steel, cast iron, tool steel, and alloy steel) make up the largest proportion both by quantity and commercial value. Iron alloyed with various proportions of carbon gives low, mid and high carbon steels; the increased carbon levels reduce ductility and toughness. The addition of silicon produces cast irons, while the addition of chromium, nickel and molybdenum to carbon steels (more than 10%) results in stainless steels.

Other significant metallic alloys are those of aluminium, titanium, copper, and magnesium. Copper alloys have been known since prehistory— bronze gave the Bronze Age its name—and have many applications today, most importantly in electrical wiring. The alloys of the other three metals were developed more recently; due to their chemical reactivity, they require electrolytic extraction processes. The alloys of aluminium, titanium, and magnesium are valued for their high strength-to-weight ratios, and magnesium can also provide electromagnetic shielding. These materials are ideal for situations where high strength-to-weight ratio is more important than material cost, such as in aerospace and some automotive applications. Alloys specially designed for highly demanding applications, such as jet engines, may contain more than ten elements.

Metals are often extracted from the Earth by means of mining, resulting in ores that are relatively rich sources of the requisite elements. Ore is located by prospecting techniques, followed by the exploration and examination of deposits. Mineral sources are generally divided into surface mines, which are mined by excavation using heavy equipment, and subsurface mines. 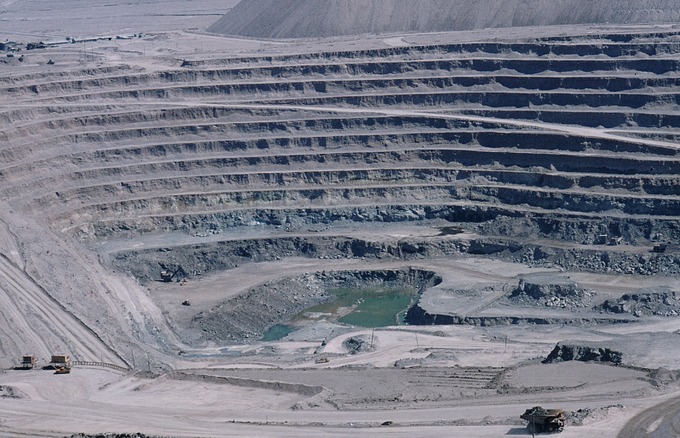 Mining: Chuquicamata, Chile, is the site of the largest circumference and second deepest open pit copper mine in the world.

After the ore is mined, the metals must be extracted, usually by chemical or electrolytic reduction. Pyrometallurgy uses high temperatures to convert ore into raw metals, while hydrometallurgy employs aqueous chemistry for the same purpose. The methods used depend on the metal and their contaminants.

When a metal ore is an ionic compound of that metal and a non-metal, the ore must usually be smelted (or heated with a reducing agent) to extract the pure metal. Many common metals, such as iron, are smelted using carbon as a reducing agent. Some metals, such as aluminium and sodium, have no commercially practical reducing agent, and are extracted using electrolysis instead. Sulfide ores are not reduced directly to the metal, but are roasted in air to convert them to oxides.

A metal can refer to an element, compound, or alloy that is a good conductor of both electricity and heat.

A metal can refer to an element, compound, or alloy that is a good conductor of both electricity and heat. Example metals include gold, sodium, copper, iron, and many other elements. Metals are usually malleable, ductile, and shiny.

Metals typically consist of close-packed atoms, meaning that the atoms are arranged like closely packed spheres. In a metal, atoms readily lose electrons to form positive ions (cations). Those ions are surrounded by de-localized electrons, which are responsible for the conductivity. The solid produced is held together by electrostatic interactions between the ions and the electron cloud, which are called metallic bonds.

Metals are shiny and lustrous with a high density. They have very high melting and boiling points because metallic bonding is very strong, so the atoms are reluctant to break apart into a liquid or gas. 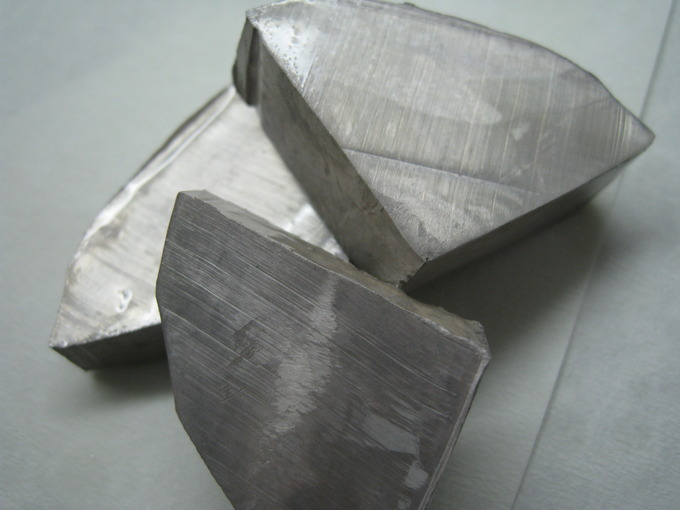 Sodium Metal: Sodium metal is soft enough to be cut with a plastic knife.

Metals in general are conductive, with high electrical conductivity and high thermal conductivity. Typically they are malleable and ductile, deforming under stress without cleaving. For example, hitting a metal with a hammer will “dent” the metal, not shatter it into pieces.

The electrical and thermal conductivities of metals originate from the fact that their outer electrons are delocalized. This means the electrons are not locked into any one atom but can move freely throughout the metal. Metals can be viewed as a collection of atoms embedded in a sea of electrons, which are highly mobile. This is very instrumental in the conductivity of the metal.

Sea of Electrons: The “sea of electrons” is free to flow about the crystal of positive metal ions.

Metals are usually inclined to form cations through electron loss. An example is the reaction with oxygen in the air to form oxides over various timescales (iron rusts over years, while potassium burns in seconds). The transition metals (such as iron, copper, zinc, and nickel) are slower to oxidize because they form a passivating layer of oxide that protects the interior. Others, like palladium, platinum, and gold, do not react with the atmosphere at all. Some metals form a barrier layer of oxide on their surface, which cannot be penetrated by further oxygen molecules. As a result, they retain their shiny appearance and good conductivity for many decades (like aluminium, magnesium, some steels, and titanium).

Metallic properties tend to decrease across a period and increase down a periodic group.

Describe the bonding in metallic elements.

Recall that in the periodic table, each row is called a period. The rows are aligned in such a way that the elements in each vertical column share certain characteristics. Each of the columns of the periodic table is called a group. Chemists have long found it convenient to refer to the elements of different groups, and in some cases of spans of groups, by the names shown in the table. Keep in mind that group names can give clues about the elements’ metallic properties. 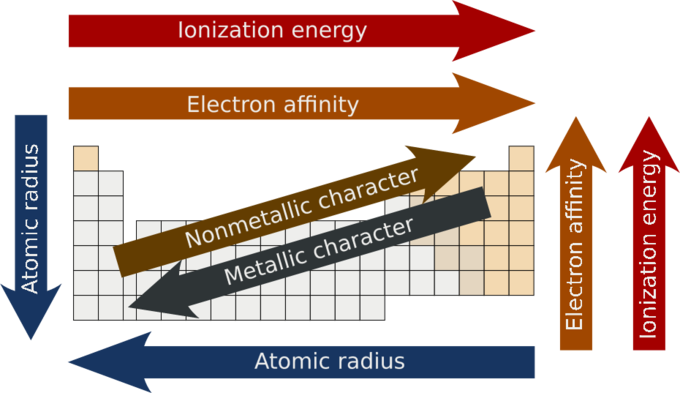 Metals tend to form positive ions, and like charges repel, so how do metal atoms stay bonded together in a solid? The simplest conception of metals is a lattice of positive ions immersed in a “sea of electrons” that can migrate freely throughout the solid. In effect, the electropositive nature of the metallic atoms allows their valence electrons to exist as a mobile fluid. This results in their high electrical conductivities. Because each ion is surrounded by the electron fluid in all directions, the bonding has no directional properties; this accounts for the high malleability and ductility of metals.