Electron orbitals are three-dimensional representations of the space in which an electron is likely to be found.

Although useful to explain the reactivity and chemical bonding of certain elements, the Bohr model of the atom does not accurately reflect how electrons are spatially distributed surrounding the nucleus. They do not circle the nucleus like the earth orbits the sun, but are rather found in electron orbitals. These relatively complex shapes result from the fact that electrons behave not just like particles, but also like waves. Mathematical equations from quantum mechanics known as wave functions can predict within a certain level of probability where an electron might be at any given time. The area where an electron is most likely to be found is called its orbital.

The second electron shell may contain eight electrons. This shell contains another spherical s orbital and three “dumbbell” shaped p orbitals, each of which can hold two electrons. After the 1s orbital is filled, the second electron shell is filled, first filling its 2s orbital and then its three p orbitals. When filling the p orbitals, each takes a single electron; once each p orbital has an electron, a second may be added. Lithium (Li) contains three electrons that occupy the first and second shells. Two electrons fill the 1s orbital, and the third electron then fills the 2s orbital. Its electron configuration is 1s22s1. Neon (Ne), on the other hand, has a total of ten electrons: two are in its innermost 1s orbital, and eight fill its second shell (two each in the 2s and three p orbitals). Thus, it is an inert gas and energetically stable: it rarely forms a chemical bond with other atoms. 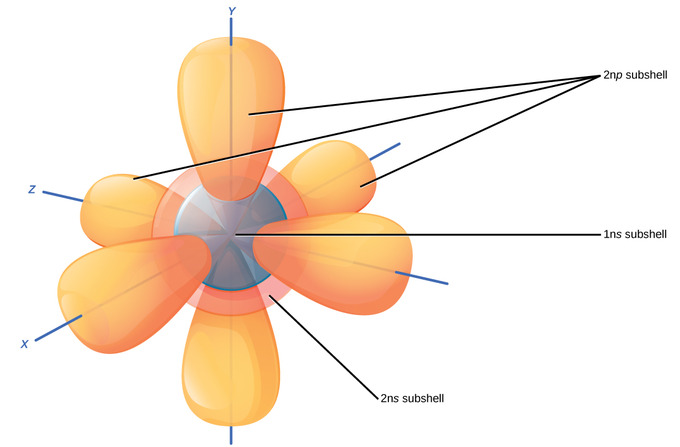 Diagram of the S and P orbitals: The s subshells are shaped like spheres. Both the 1n and 2n principal shells have an s orbital, but the size of the sphere is larger in the 2n orbital. Each sphere is a single orbital. p subshells are made up of three dumbbell-shaped orbitals. Principal shell 2n has a p subshell, but shell 1 does not.

Larger elements have additional orbitals, making up the third electron shell. Subshells d and f have more complex shapes and contain five and seven orbitals, respectively. Principal shell 3n has s, p, and d subshells and can hold 18 electrons. Principal shell 4n has s, p, d, and f orbitals and can hold 32 electrons. Moving away from the nucleus, the number of electrons and orbitals found in the energy levels increases. Progressing from one atom to the next in the periodic table, the electron structure can be worked out by fitting an extra electron into the next available orbital. While the concepts of electron shells and orbitals are closely related, orbitals provide a more accurate depiction of the electron configuration of an atom because the orbital model specifies the different shapes and special orientations of all the places that electrons may occupy.

The Phase of Orbitals

When constructing molecular orbitals, the phase of the two orbitals coming together creates bonding and anti-bonding orbitals.

The electron is a quantum particle and cannot have a distinct location, but the electron’s orbital can be defined as the region of space around the nucleus in which the probability of finding the electron exceeds some arbitrary threshold value, such as 90% or 99%.

Because of the wave-like character of matter, the orbital corresponds to a standing-wave pattern in 3-dimensional space that we can often represent more clearly in a 2-dimensional cross section. The quantity that is varying (“waving”) is a number denoted by ψ (psi), whose value varies from point to point according to the wavefunction for that particular orbital.

Orbitals of all types are simply mathematical functions that describe particular standing-wave patterns that can be plotted on a graph but have no physical reality of their own. Because of their wavelike nature, two or more orbitals (i.e., two or more functions ψ) can be combined both in-phase and out-of-phase to yield a pair of resultant orbitals that, to be useful, must have squares that describe actual electron distributions in the atom or molecule.

Molecular Orbitals and Their Phases

When combining orbitals to describe a bonding interaction between two species, the symmetry requirements for the system dictate that the two starting orbitals must make two new orbitals. One orbital, based on in-phase mixing of the orbitals, will be lower in energy and termed bonding. Another orbital, based on out-of-phase mixing of the orbitals, will be higher in energy and termed anti-bonding.

Two atomic orbitals can overlap in two ways depending on their phase relationship. The phase of an orbital is a direct consequence of the wave-like properties of electrons. In graphical representations of orbitals, orbital phase is depicted either by a plus or minus sign (which have no relationship to electric charge) or by shading one lobe. The sign of the phase itself does not have physical meaning except when mixing orbitals to form molecular orbitals.

Two same-sign orbitals have a constructive overlap forming a molecular orbital with the bulk of the electron density located between the two nuclei. This molecular orbital is called the bonding orbital and its energy is lower than that of the original atomic orbitals. A bond involving molecular orbitals that are symmetric with respect to rotation around the bond axis is called a sigma bond (σ-bond). If the phase changes, the bond becomes a pi bond (π-bond). Symmetry labels are further defined by whether the orbital maintains its original character after an inversion about its center; if it does, it is defined gerade (g), German for “straight.” If the orbital does not maintain its original character, it is ungerade (u), German for “odd.”

Atomic orbitals can also interact with each other out-of-phase, which leads to destructive cancellation and no electron density between the two nuclei at the so-called nodal plane depicted as a perpendicular dashed line. In this anti-bonding molecular orbital with energy much higher than the original atomic orbitals, any electrons present are located in lobes pointing away from the central internuclear axis. For a corresponding σ-bonding orbital, such an orbital would be symmetrical but differentiated from it by an asterisk, as in σ*. For a π-bond, corresponding bonding and antibonding orbitals would not have such symmetry around the bond axis and would be designated π and π*, respectively. 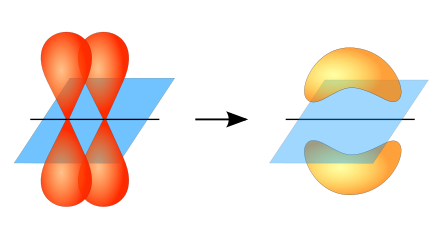 Two p-orbitals forming a π-bond: If two parallel p-orbitals experience sideways overlap on adjacent atoms in a molecule, then a double or triple bond can develop. Although the π-bond is not as strong as the original σ-bond, its strength is added to the existing single bond.

P-orbital overlap is less than head-on overlap between two s orbitals in a σ-bond due to orbital orientation. This makes the π-bond a weaker bond than the original σ-bond that connects two neighboring atoms; however the fact that its strength is added to the underlying σ-bond bond makes for a stronger overall linkage. Electrons in π-bonds are often referred to as π- electrons. They limit rotational freedom about the double bond because a parallel orientation of the p-orbitals must be preserved to maintain the double or triple bond.