Chemistry and the Real World

Outer Layers of the Atmosphere

The Earth’s atmosphere is a layer of mixed gases that is trapped near the surface due to gravitational forces.

The Earth’s atmosphere is composed of a layer of gases that encase the planet and that are constrained by gravitational forces. 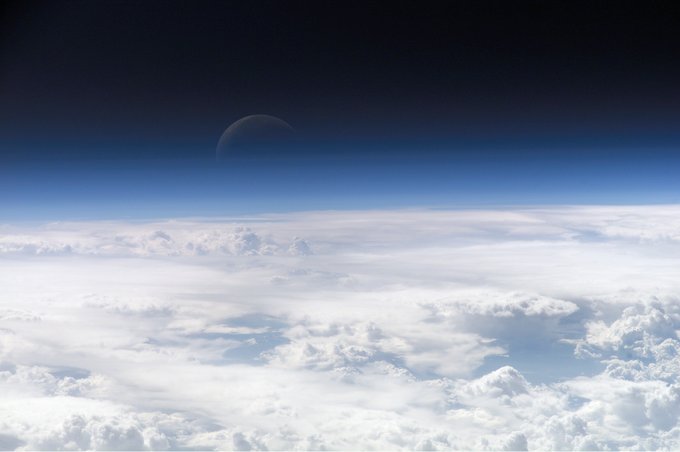 The Earth’s atmosphere: A view of the Earth from space, looking from orbit beyond the exosphere, down through the layers of the thermosphere, mesosphere, and stratosphere, at a thick cloud layer topping the troposphere.

In the 1800s, scientists, including John Dalton, realized that the atmosphere was composed of a variety of gases. By volume, air is made up of approximately 78% nitrogen, 21% oxygen, and 1% argon, with small amounts of additional gases including water vapor and carbon dioxide. While the three major components have remained relatively constant over time and space, the minor components, which also include methane, sulfur dioxide, ozone, and nitrogen oxides, have varied more widely. These minor components are the major contributors to phenomena like weather, the greenhouse effect, and global warming.

In recent years, additional carbon dioxide has helped trap additional heat being radiating off the planet. Carbon dioxide, water vapor, and other greenhouse gases are adept at stopping heat from leaving the atmosphere, causing the Earth to heat up. Some greenhouse gases are beneficial—without them, Earth would be as cold as the moon—but the recent increase in carbon dioxide has upset the precise balance between too cold, too hot, and just right.

The atmosphere is further classified into multiple layers by temperature, which include the thermosphere, the mesosphere, the stratosphere, and the troposphere. Both air pressure and density increase upon approaching the Earth’s surface. The layer closest to the Earth, the troposphere, contains most of the water vapor and is where weather occurs. The next layer, the stratosphere, contains an ozone layer that results from the reaction of ionizing solar radiation with oxygen gas; this ozone layer is responsible for the absorption of UV light.

In the recent past, we have damaged our ozone layer by putting chlorofluorocarbons (CFCs) into the atmosphere. The CFCs have damaged ozone, resulting in a hole in the ozone layer. In recent years, CFCs have been banned and the ozone layer hole is shrinking. Farther from the surface, the mesosphere, the thermosphere, and then the exosphere make up the top layers of our atmosphere. Planes typically fly in the stratosphere.

The atmosphere performs a various beneficial functions for the inhabitants of Earth including: absorbing UV radiation, heating the Earth’s surface, and buffering temperature fluctuations.

Aurora Borealis and the Aurora Australis

Aurora borealis and australis are glowing sky phenomena that occur when charged particles from the sun excite atmospheric molecules.

Recall how and why the aurora forms.

An aurora is classified as either a diffuse or a discrete aurora. A diffuse aurora is a featureless glow in the sky that may not be visible to the naked eye even on a dark night and defines the extent of the auroral zone (the area in which auroras are visible). Discrete auroras are sharply-defined features within the diffuse aurora; they vary in brightness from barely visible to bright enough for reading a newspaper at night.

In northern latitudes, the effect is known as the aurora borealis (or the northern lights), named by Pierre Gassendi in 1621 after the Roman goddess of dawn, Aurora, and the Greek name for the north wind, Boreas. The northern lights have had a number of names throughout history: the Cree called the phenomenon the “Dance of the Spirits”; in Europe in the Middle Ages, the auroras were commonly believed to be a sign from God.

Auroras seen near the magnetic pole may be high overhead, but from farther away, they illuminate the northern horizon as a greenish glow or sometimes a faint red, as if the sun were rising from an unusual direction. Discrete auroras often display magnetic field lines or curtain-like structures. They can change within seconds or glow unchanging for hours, most often in fluorescent green. The aurora borealis most often occurs near the winter equinox when it is dark for long periods of time. Clouds in the sky and any light (natural sunlight or man-made light) can prevent the possibility of seeing the aurora from the ground.

The aurora borealis’ southern counterpart, the aurora australis (or the southern lights), has almost identical features. It changes simultaneously with the northern auroral zone and is visible from high southern latitudes in Antarctica, South America, New Zealand, and Australia. 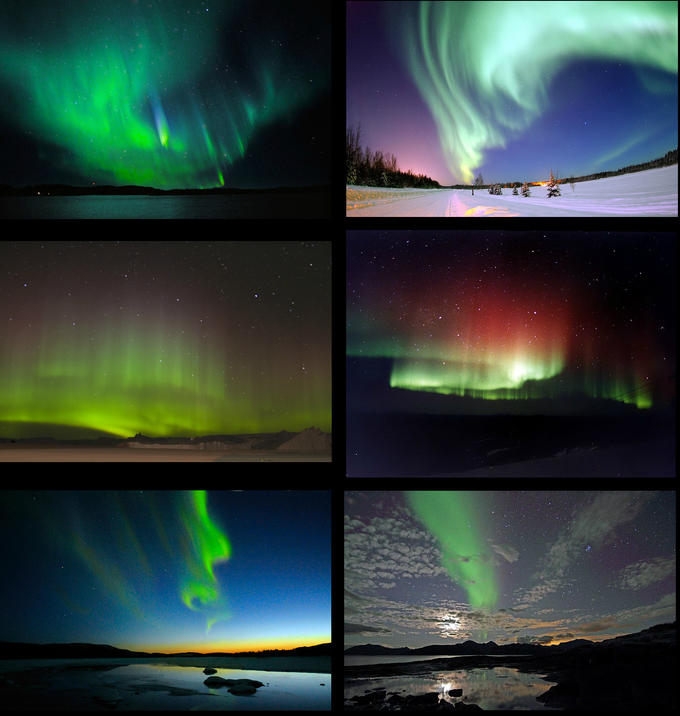 What Causes the Aurora?

Auroras result from emissions of photons in the Earth’s upper atmosphere (above 80 km, or 50 mi), from ionized nitrogen atoms regaining an electron, and from oxygen and nitrogen atoms returning from an excited state to ground state. They are ionized or excited by the collision of solar wind and magnetospheric particles (such as high energy protons and electrons) funneling down and accelerating along the Earth’s magnetic field lines. The excited particles’ energy is lost by the emitting photon or colliding with another atom or molecule.

The solar wind consists of free, high-energy electrons and protons that originate at the sun. In the vacuum of space, they maintain their energy because the normal method of energy loss, collision, is not possible due to the low particle density. Instead, this energetic flow of particles is attracted to the Earth’s magnetic field, where it collides with oxygen and nitrogen in the top regions of the atmosphere. The movement of these charged particles also causes electricity, which serves to further excite the molecules in the Earth’s atmosphere. This energy serves to move the electrons in nitrogen and oxygen from their ground state up to an excited state, where they can then decay back to the ground state by emitting photons of visible light (see the concept on emission spectra for more information). Collisions with other atoms or molecules can absorb the excitation energy and prevent emission.

Oxygen emissions are green or brownish-red, depending on the amount of energy absorbed. Nitrogen emissions are blue if the atom regains an electron after it has been ionized and red if the atom returns to ground state from an excited state. Oxygen is unusual in terms of its return to ground state: it can take three-quarters of a second to emit green light and up to two minutes to emit red. Because the very top of the atmosphere has a higher percentage of oxygen and is sparsely distributed, collisions preventing emission are rare enough to allow oxygen the time needed to emit red light.

The glow observed as a space shuttle re-enters the atmosphere is due to excited NO2 releasing light to return to its ground state.

When space shuttles return from space and being to re-enter the Earth’s atmosphere, a glow, especially around the tail end of the shuttle, can often be observed. This phenomenon has to do with the composition of the atmosphere at these altitudes and the lack of shielding from the sun. 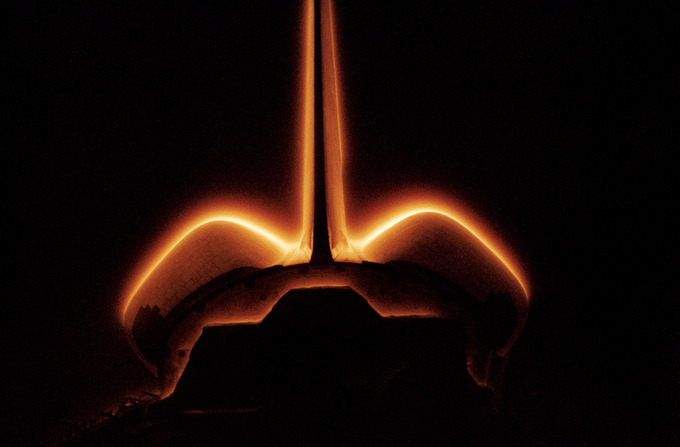 Shuttle glow: When atomic oxygen from the high atmosphere combines with nitric oxide on the surface of the space shuttle, the resulting excited nitrogen dioxide returns to the ground state emitting an apparent glow.

Where Does the Glow Come From?

You may have heard of the ozone layer, which protects the Earth from ultraviolet radiation. This protection is not present higher up in the atmosphere, however, where the high-energy light from the sun interacts with molecular oxygen, breaking it apart into atomic oxygen. This highly-reactive species interacts with almost any molecule with which it comes in contact.

The lining of the space shuttle is no exception; specifically, the glow on the space shuttle forms when atomic oxygen reacts with the nitric oxide (NO) on the exterior of the shuttle. The origin of the NO is unclear, although it may be collected from the atmosphere or be a byproduct of the fuel consumption from the shuttle thrusters. This interaction produces NO2 according to the equation:

where NO2* represents the excited state of electrons in NO2. It is the relaxation of these electrons from the excited state back to the ground state that produces the glow that is visible around the space shuttle (see the concept about the emission spectra for more information).