Dalton’s Law of Partial Pressure states the total pressure exerted by a mixture of gases is equal to the sum of the partial pressure of each individual gas.

Demonstrate an understanding of partial pressures and mole fractions.

Because it is dependent solely the number of particles and not the identity of the gas, the Ideal Gas Equation applies just as well to mixtures of gases is does to pure gases. In fact, it was with a gas mixture—ordinary air—that Boyle, Gay-Lussac, and Charles performed their early experiments. The only new concept we need to deal with gas mixtures is partial pressure, a concept invented by the famous English chemist John Dalton (1766-1844). Dalton correctly reasoned that the low density and high compressibility of gases were indicative of the fact that they consisted mostly of empty space; from this, it Dalton concluded that when two or more different gases occupy the same volume, they behave entirely independently of one another.

Dalton’s Law (also called Dalton’s Law of Partial Pressures) states that the total pressure exerted by the mixture of non-reactive gases is equal to the sum of the partial pressures of individual gases. Mathematically, this can be stated as follows:

where P1, P2 and Pn represent the partial pressures of each compound. It is assumed that the gases do not react with each other.

A 2.0 L container is pressurized with 0.25 atm of oxygen gas and 0.60 atm of nitrogen gas. What is the total pressure inside the container?

The total pressure inside the contain is 0.85 atm.

The partial pressure of one individual gas within the overall mixtures, pi, can be expressed as follows:

where xi is the mole fraction.

We know from Boyle’s Law that the total pressure of the mixture depends solely on the number of moles of gas, regardless of the types and amounts of gases in the mixture; the Ideal Gas Law reveals that the pressure exerted by a mole of molecules does not depend on the identity of those particular molecules; Dalton’s Law now allows us to calculate the total pressure in a system when we know each gas individual contribution.

Consider a container of fixed volume 25.0 L. We inject into that container 0.78 moles of N2 gas at 298 K. From the Ideal Gas Law, we can easily calculate the measured pressure of the nitrogen gas to be 0.763 atm.

As a third measurement, we inject 0.22 moles of O2 gas at 298K into the first container, which already has 0.78 moles of N2. (Note that the mixture of gases we have prepared is very similar to that of air. ) The measured pressure in this container is now found to be 0.975 atm.

The amount of gas present can be determined by collecting a gas over water and applying Dalton’s Law.

Apply Dalton’s Law to determine the partial pressure of a gas collected over water. 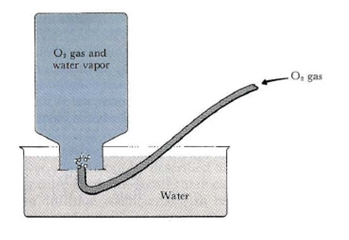 Collecting gas over water: When collecting oxygen gas and calculating its partial pressure by displacing water from an inverted bottle, the presence of water vapor in the collecting bottle must be accounted for; this is easily accomplished using Dalton’s Law of Partial Pressures.

Since gases have such small densities, it can be difficult to measure their mass. A common way to determine the amount of gas present is by collecting it over water and measuring the height of displaced water; this is accomplished by placing a tube into an inverted bottle, the opening of which is immersed in a larger container of water.

This arrangement is called a pneumatic trough, and it was widely used in the early days of chemistry. As the gas enters the bottle, it displaces the water and becomes trapped in the closed, upper part of the bottle. You can use this method to measure a pure gas (i.e. O2) or the amount of gas produced from a reaction. The collected gas is not the only gas in the bottle, however; keep in mind that liquid water itself is always in equilibrium with its vapor phase, so the space at the top of the bottle is actually a mixture of two gases: the gas being collected, and gaseous H2O. The partial pressure of H2O is known as the vapor pressure of water and is dependent on the temperature. To determine the quantity of gas we have collected alone, we must subtract the vapor pressure of water from the total vapor pressure of the mixture.

The total pressure in the tube can be written using Dalton’s Law of Partial Pressures:

Next, we apply the Ideal Gas Law:

Oxygen gas generated in an experiment is collected at 25°C in a bottle inverted in a trough of water. The external laboratory pressure is 1.000 atm. When the water level in the originally full bottle has fallen to the level in the trough, the volume of collected gas is 1750 ml. How many moles of oxygen gas have been collected?

Collecting a Gas Over Water: How to calculate the pressure of a gas sample if it has been collected over water.