Consider the arrangement of spheres within a lattice to form a view of the structure and complexity of crystalline materials.

Illustrate how atoms or molecules pack in crystalline materials.

The structure seen within the crystalline lattice of a material can be described in a number of ways. The most common way to describe a crystal structure is to refer to the size and shape of the material’s characteristic unit cell, which is the simplest repeating unit within the crystal. In principle, one can reconstruct the structure of an entire crystal by repeating the unit cell so as to create a three-dimensional lattice. 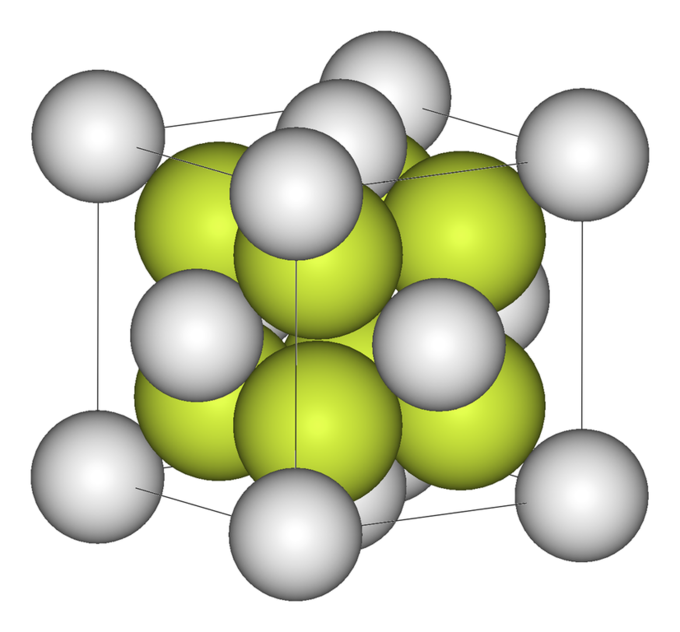 Unit Cell of Fluorite: This shows the simplest repeating unit within a crystal of the molecule fluorite, or calcium fluoride (CaF2). Notice that this unit cell contains several atoms. Calcium ions are depicted as gray spheres, and fluorine ions are yellow.

Packing of Atoms Within a Unit Cell 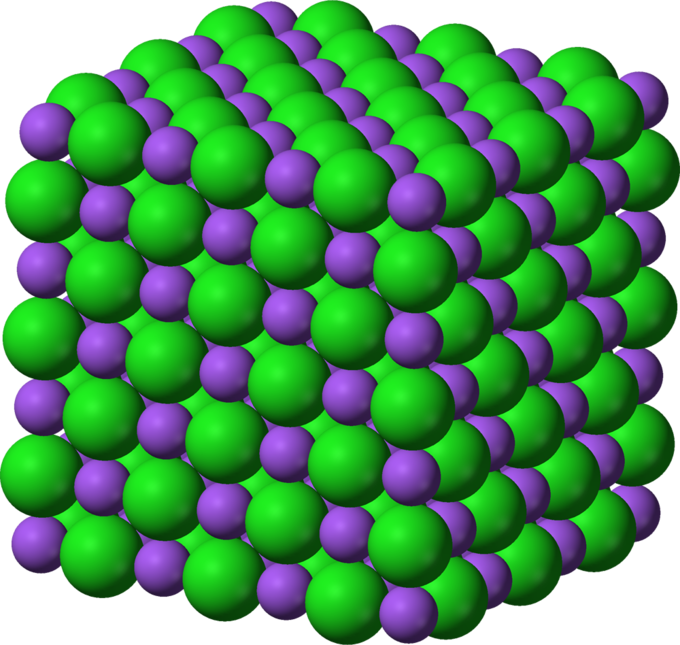 By considering how atomic spheres are arranged relative to one another, their coordination numbers, and the dimensions of the unit cell, it is possible to form a general view of the structure and complexity of particular crystal structures.

Closest packing refers to the most efficient way to arrange atoms in a crystalline unit cells.

Discuss the two ways in which atoms/molecules pack in the most efficient way in crystals.

Interactive: Molecular View of a Solid: Explore the structure of a solid at the molecular level.

Two Types of Atom Packing in a Crystal

The three dimensional structure of a solid crystalline material is established through the periodic patterning of the atoms that make up the crystal. The most efficient conformation of atomic spheres within a unit cell is known as the closest packing formation. In a three dimensional representation of this hypothetical unit cell—with the spheres packed as efficiently as possible—there are two methods to densely pack the cell.

Imagine a single layer of spheres packed into the bottom of a unit cell. 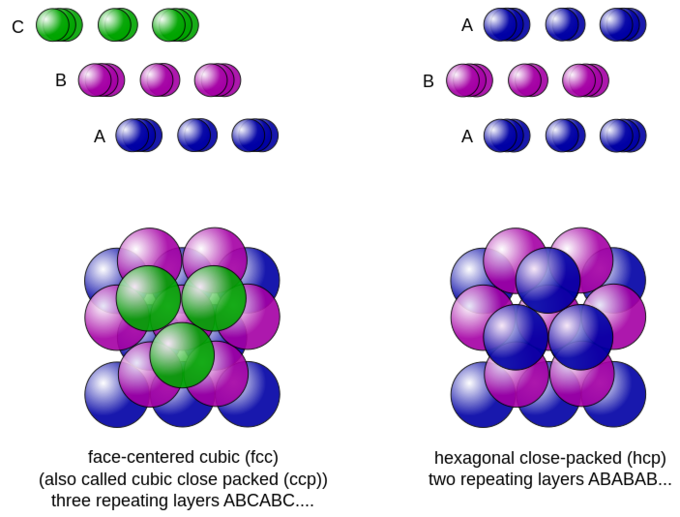 The Importance of Packing

The arrangement of the atoms in a crystalline solid affects atomic coordination numbers, interatomic distances, and the types and strengths of bonding that occur within the solid. An understanding of atomic packing in a unit cell and crystal lattice can give insight to the physical, chemical, electrical, and mechanical properties of a given crystalline material.

X-ray crystallography is a method of determining the arrangement of atoms within molecules.

Describe the method of x-ray crystallography as it is used for determining the structure of molecules.

X-ray crystallography is a method for determining the arrangement of atoms within a crystal structure. Substances including inorganic salts and minerals, semiconductors, and organic and biological compounds can form crystals under suitable and specific conditions. The method is useful in determining the structure of molecules, which allows researchers to characterize and understand their behavior and function. This method of structure determination has provided the most reliable evidence scientists have about the way molecules are shaped and what their bonds angles and lengths are.

The best x-ray crystallographic structures are derived from the purest crystal samples, meaning samples that contain only molecules of one type and as few impurities as possible. Crystal samples contaminated with impurities, samples that are too small, and samples that are not uniform may result in the formation of imperfect crystals, whose defects affect the quality of the data that can be obtained. Once a crystal has been deemed of sufficient quality, it is generally mounted on special instruments and “shot” with an intense beam of X-rays.

This process reveals the geometry of the atoms within the molecules. The x-ray beams are diffracted in a characteristic pattern that gives rise to reflections, dark spots on the detector which represent places where constructive interference of the diffracted light has occurred. The detector records the reflections on a two-dimensional surface. The crystal is typically rotated with respect to different axes and shot again with X-rays, so that diffraction patterns from all angles of the X-rays hitting the crystal are recorded. 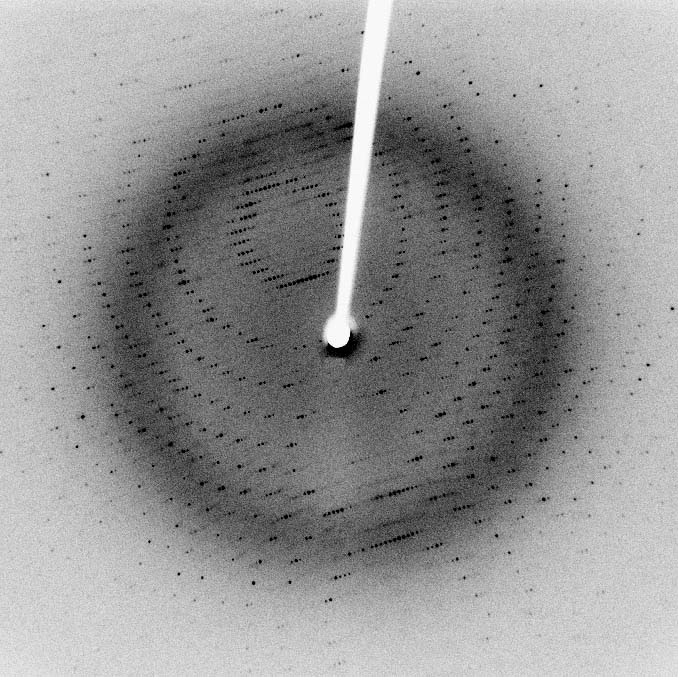 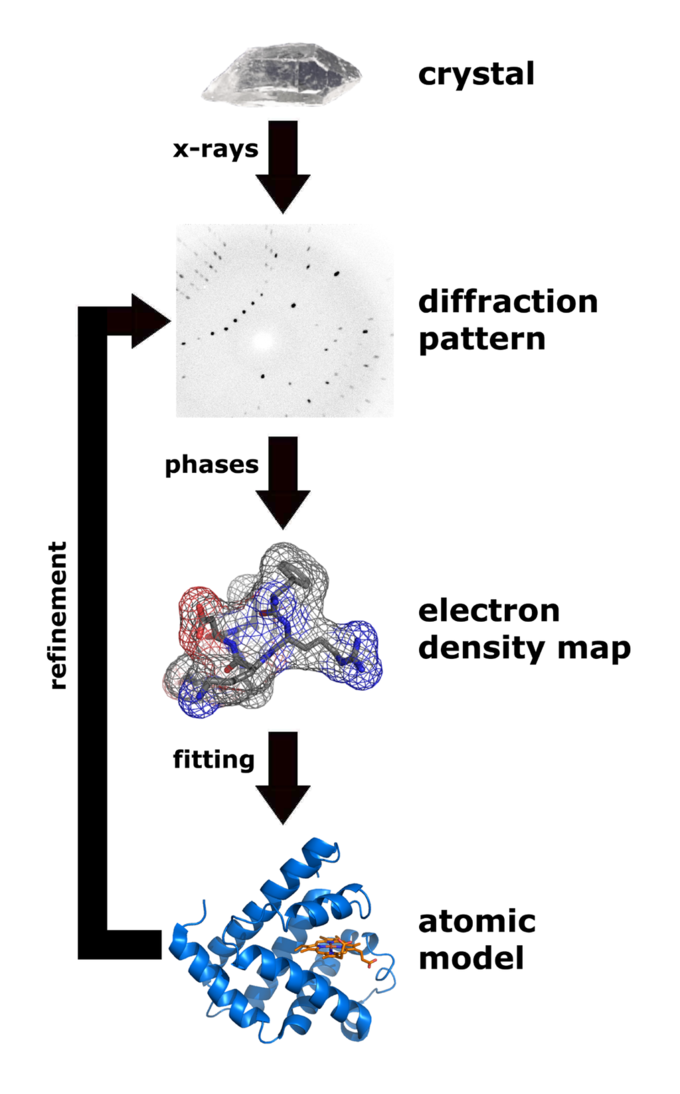 Workflow for Solving a Molecular Structure Using X-ray Crystallography: The steps to the process of determining the three dimensional structure of a molecule are outlined in this figure.

The final result is the three-dimensional structure of the molecules in the crystal. This is the most direct method that exists for “seeing” what molecules look like. Details such as atomic radii, bond angles and lengths, and molecular geometry are revealed through this method.

X-ray crystallography is a powerful tool that has broad applications in the determination of the structures of both organic and inorganic compounds. Throughout the history of chemistry and biochemistry, x-ray crystallography has been one of the most important methods in helping scientists understand the atomic structure and bonding. X-ray diffraction data have proven useful in identifying the structures of protein parts of viruses, such as HIV, which was instrumental in the design of drugs that can specifically target the virus’ needed machinery for its life cycle.