Unlike nonelectrolytes, electrolytes contain dissolved ions that enable them to easily conduct electricity.

Recognize the properties of an electrolyte solution.

An electrolyte is any salt or ionizable molecule that, when dissolved in solution, will give that solution the ability to conduct electricity. This is because when a salt dissolves, its dissociated ions can move freely in solution, allowing a charge to flow.

Electrolyte solutions are normally formed when a salt is placed into a solvent such as water. For example, when table salt, NaCl, is placed in water, the salt (a solid) dissolves into its component ions, according to the dissociation reaction:

It is also possible for substances to react with water to yield ions in solution. For example, carbon dioxide gas, CO2, will dissolve in water to produce a solution that contains hydrogen ions, carbonate, and hydrogen carbonate ions:

The resulting solution will conduct electricity because it contains ions. It is important to keep in mind, however, that CO2 is not an electrolyte, because CO2 itself does not dissociate into ions. Only compounds that dissociate into their component ions in solution qualify as electrolytes.

As mentioned above, when an ionizable solute dissociates, the resulting solution can conduct electricity. Therefore, compounds that readily form ions in solution are known as strong electrolytes. (By this reasoning, all strong acids and strong bases are strong electrolytes.)

By contrast, if a compound dissociates to a small extent, the solution will be a weak conductor of electricity; a compound that only dissociates weakly, therefore, is known as a weak electrolyte. 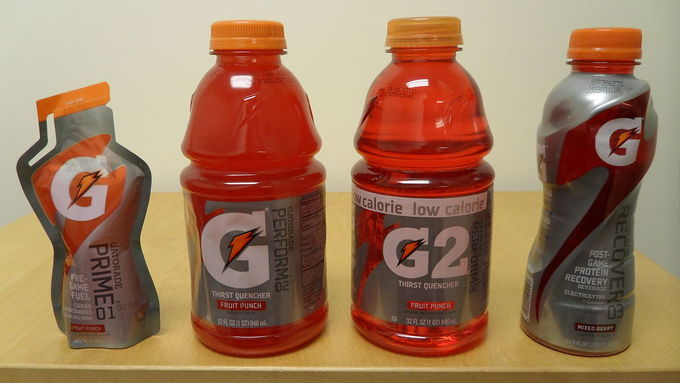 When electrodes are placed in an electrolyte solution and a voltage is applied, the electrolyte will conduct electricity.

Use a table of standard reduction potentials to determine which species in solution will be reduced or oxidized.

For example, in a solution of ordinary table salt (sodium chloride, NaCl) in water, the cathode reaction will be:

and hydrogen gas will bubble up. The anode reaction is:

and chlorine gas will be liberated. The positively-charged sodium ions Na+ will react toward the cathode, neutralizing the negative charge of OH− there; the negatively-charged hydroxide ions OH− will react toward the anode, neutralizing the positive charge of Na+ there. Without the ions from the electrolyte, the charges around the electrode slow continued electron flow; diffusion of H+ and OH− through water to the other electrode takes longer than movement of the much more prevalent salt ions.

Oxidation and Reduction at the Electrodes

It is possible to oxidize ferrous ions to ferric ions at the anode. For example:

Neutral molecules can also react at either electrode. For example, p-Benzoquinone can be reduced to hydroquinone at the cathode:

Hydroquinone: Hydroquinone is a reductant or electron donor and organic molecule.

The oxidized or reduced substances can also be the solvent (usually water) or electrodes. It is possible to have electrolysis involving gases.

In order to determine which species in solution will be oxidized and which will be reduced, the standard electrode potential of each species may be obtained from a table of standard reduction potentials, a small sampling of which is shown here: 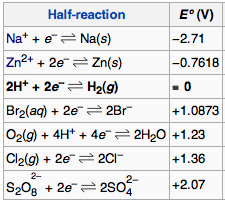 Standard electrode potentials table: This is the standard reduction potential for the reaction shown, measured in volts. Positive potential is more favorable in this case.

Historically, oxidation potentials were tabulated and used in calculations, but the current standard is to only record the reduction potential in tables. If a problem demands use of oxidation potential, it may be interpreted as the negative of the recorded reduction potential. For example, referring to the data in the table above, the oxidation of elemental sodium (Na(s)) is a highly favorable process with a value of [latex]E_{ox}^0 (V)[/latex]= + 2.71 V; this makes intuitive sense because the loss of one electron from a sodium atom produces a sodium cation, which has the same electron configuration as neon, a noble gas. The production of this low-energy and stable electron configuration is clearly a favorable process. Chlorine gas on the other hand is much more likely to be reduced under normal conditions, as can be inferred from the value of [latex]E_{red}^0 (V)[/latex]= +1.36 V in the table. Recall that a more positive potential always means that that reaction will be favored; this will have consequences concerning redox reactions.