In chemistry, valence bond (VB) theory is one of two basic theories—along with molecular orbital (MO) theory—that use quantum mechanics to explain chemical bonding. According to VB theory, a covalent bond forms from the physical overlap of half-filled valence orbitals in two atoms.

Mechanism of Bonding in VB Theory

The VB theory describes the formation of covalent bonds from the overlap of atomic orbitals on two different atoms. Because of the overlap, it is highly probable that a pair of electrons are found in the physical region or space where the orbitals overlap.

There are two types of overlapping orbitals: sigma ([latex]\sigma[/latex]) and pi ([latex]\pi[/latex]). Both bonds are formed from the overlap of two orbitals, one on each atom. [latex]\sigma[/latex] bonds occur when orbitals overlap between the nuclei of two atoms, also known as the internuclear axis.

[latex]\sigma[/latex] Bond Formation: Atomic orbitals from two atoms overlap in the region between the nuclei (internuclear axis). Therefore, the resulting electron density of the shared electrons lies in the red region shown in the image. 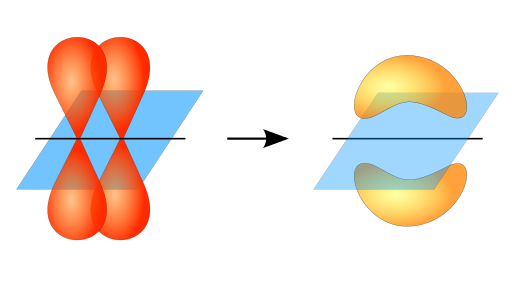 VB theory complements molecular orbital (MO) theory, which does not adhere to the VB concept that electron pairs are localized between two specific atoms in a molecule. MO theory states that electrons are distributed in sets of molecular orbitals that can extend over the entire molecule. MO theory can predict magnetic and ionization properties in a straightforward manner. VB theory produces similar results, but is more complicated.

An important aspect of the VB theory is the condition of maximum overlap which leads to the formation of the strongest possible bonds. This theory is used to explain the covalent bond formation in many molecules. In the F2 molecule, the F–F [latex]\sigma[/latex] covalent bond is formed by the overlap of pz orbitals of the two F atoms, each containing an unpaired electron. Since the nature of the overlapping orbitals is different in H2 and F2 molecules, bond strength and bond lengths differ between H2 and F2 molecules.

In an HF molecule, the covalent [latex]\sigma[/latex] bond forms from the overlap of the 1s orbital of H and the 2pz orbital of F, each containing an unpaired electron. Mutual sharing of electrons between H and F results in a covalent bond in HF.

Explain the process of hybridization as it applies to the formation of sp3 hybridized atoms.

In a tetravalent molecule, four outer atoms are bonded to a central atom. Perhaps the most common and important example of this bond type is methane, CH4. In the ground state of the free carbon atom, there are two unpaired electrons in separate 2p orbitals. To form four bonds, the atom must have four unpaired electrons; this requires that carbon’s valence 2s and 2p orbitals each contain an electron for bonding.

The single 2s orbital is spherical, different from the dumbbell-shaped 2p orbitals. This would indicate that one of the four bonds differs from the other three, but scientific tests have proven that all four bonds have equal length and energy; this is due to the hybridization of carbon’s 2s and 2p valence orbitals. 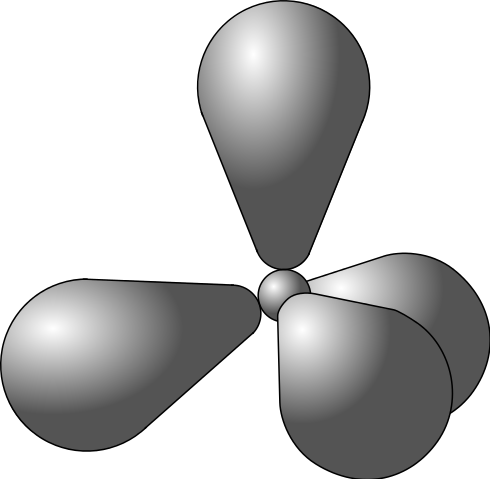 The bonds between carbon and hydrogen can form the backbone of very complicated and extensive chain hydrocarbon molecules. The simplest of these is ethane (C2H6), in which an sp3 orbital on each of the two carbon atoms joins (overlaps) to form a carbon-carbon bond; then, the remaining carbon sp3 orbital overlaps with six hydrogen 1s orbitals to form the ethane molecule. 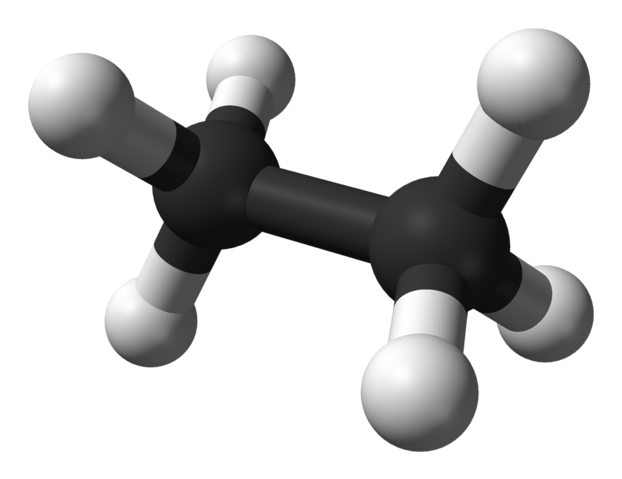 Ethane: Ethane can form by replacing one of the hydrogen atoms in CH4 with another sp3 hybridized carbon fragment.

If lone electron pairs are present on the central atom, thet can occupy one or more of the sp3 orbitals. For example, in the ammonia molecule, the fourth of the sp3 hybrid orbitals on the nitrogen contains the two remaining outer-shell electrons, which form a non-bonding lone pair.

In the water molecule, the oxygen atom can form four sp3 orbitals. Two of these are occupied by the two lone pairs on the oxygen atom, while the other two are used for bonding. The observed H-O-H bond angle in water (104.5°) is less than the tetrahedral angle (109.5°); one explanation for this is that the non-bonding electrons tend to remain closer to the central atom and thus exert greater repulsion on the other orbitals, pushing the two bonding orbitals closer together.

sp2 hybridization occurs between one s-orbital and two p-orbitals.

Recognize the role of sp2 hybridized atoms in sigma and pi bonding.

Boron trifluoride (BF3) has a boron atom with three outer-shell electrons in its normal or ground state, as well as three fluorine atoms, each with seven outer electrons. One of the three boron electrons is unpaired in the ground state. In order to explain the bonding, the 2s orbital and two of the 2p orbitals (called sp2 hybrids) hybridize; one empty p-orbital remains.

Boron configuration diagram: One of the three boron electrons is unpaired in its ground state. The atomic s- and p-orbitals in boron’s outer shell mix to form three equivalent hybrid orbitals. These particular orbitals are called sp2 hybrids, meaning that this set of orbitals derives from one s- orbital and two p-orbitals of the free atom.

sp2 Hybridization in Ethene and the Formation of a Double Bond

Ethene (C2H4) has a double bond between the carbons. In this case, carbon will sp2 hybridize; in sp2 hybridization, the 2s orbital mixes with only two of the three available 2p orbitals, forming a total of three sp hybrid orbitals with one p-orbital remaining. The three hybridized orbitals explain the three sigma bonds that each carbon forms.

sp2 hybridization in ethene: In sp^2 hybridization, the 2s orbital mixes with only two of the three available 2p orbitals, forming a total of three sp^2 orbitals with one p-orbital remaining.

The two carbon atoms form a sigma bond in the molecule by overlapping two sp2 orbitals. Each carbon atom forms two covalent bonds with hydrogen by s–sp2 overlap, all with 120° angles. The pi bond between the carbon atoms perpendicular to the molecular plane is formed by 2p–2p overlap.

sp hybrid orbitals form from one s-orbital and one p-orbital.

Describe the bonding geometry of an sp hybridized atom.

Any central atom surrounded by just two regions of valence electron density in a molecule will exhibit sp hybridization. Some examples include the mercury atom in the linear HgCl2 molecule, the zinc atom in Zn(CH3)2, which contains a linear C–Zn–C arrangement, the carbon atoms in HCCH and CO2, and the Be atom in BeCl2. This last example will be discussed in more detail below.

The beryllium atom in a gaseous BeCl2 molecule is an example of a central atom with no lone pairs of electrons in a linear arrangement of three atoms. There are two regions of valence electron density in the BeCl2 molecule that correspond to the two covalent Be–Cl bonds. To accommodate these two electron domains, two of the Be atom’s four valence orbitals will mix to yield two hybrid orbitals.

s and p Orbitals Combining to Form Two sp Orbitals: Hybridization of an s orbital and a p orbital of the same atom produces two sp hybrid orbitals. Each hybrid orbital is oriented primarily in just one direction. Note that each sp orbital contains one lobe that is significantly larger than the other. The set of two sp orbitals are oriented at 180°, which is consistent with the geometry for two domains.

The set of sp orbitals appears similar in shape to the original p orbital, but there is an important difference. The number of atomic orbitals combined always equals the number of hybrid orbitals formed. The p orbital is one orbital that can hold up to two electrons. The sp set is two equivalent orbitals that point 180° from each other. The two electrons that were originally in the s orbital are now distributed to the two sp orbitals, which are half filled.

In gaseous BeCl2, these half-filled hybrid orbitals will overlap with orbitals from the chlorine atoms to form two identical σ bonds.

The electronic differences in an isolated Be atom and in the bonded Be atom can be illustrated using an orbital energy-level diagram. These diagrams represent each orbital by a horizontal line (indicating its energy) and each electron by an arrow. Energy increases toward the top of the diagram. We use one upward arrow to indicate one electron in an orbital and two arrows (up and down) to indicate two electrons of opposite spin.

Orbital Energy-Level Diagrams For Isolated and Bonded Be: The left orbital energy-level diagram shows both electrons of Be in the 2s orbital. The right energy-level diagrams shows sp hybridized orbitals on Be in the linear BeCl2 molecule. Each of the two sp hybrid orbitals holds one electron and is thus half filled and available for bonding via overlap with a Cl 3p orbital.

sp2, sp hybridizations, and pi-bonding can be used to describe the chemical bonding in molecules with double and triple bonds.

Describe the role of hybridization in the formation of double and triple bonds.

In chemistry, hybridization is the concept of mixing atomic orbitals to form new hybrid orbitals suitable for describing bonding properties. Hybridized orbitals are very useful in explaining of the shape of molecular orbitals for molecules, and are an integral part of valence bond theory.

The hybrids are named for the atomic orbitals involved in the hybridization. In methane (CH4) for example, a set of sp3 orbitals forms by mixing one s- and three p-orbitals on the carbon atom. The orbitals are directed toward the four hydrogen atoms, which are located at the vertices of a regular tetrahedron.

Ethene (C2H4) has a double bond between the carbons. For this molecule, carbon will sp2 hybridize. In sp2 hybridization, the 2s orbital mixes with only two of the three available 2p orbitals, forming a total of 3 sp2 orbitals with one p-orbital remaining. In ethylene (ethene), the two carbon atoms form a sigma bond by overlapping two sp2 orbitals; each carbon atom forms two covalent bonds with hydrogen by s–sp2 overlapping all with 120° angles. The pi bond between the carbon atoms forms by a 2p-2p overlap. The hydrogen-carbon bonds are all of equal strength and length, which agrees with experimental data.

Multiple bonds can also occur between dissimilar atoms. When the two O-atoms are brought up to opposite sides of the carbon atom in carbon dioxide, one of the p orbitals on each oxygen forms a pi bond with one of the carbon p-orbitals. In this case, sp hybridization leads to two double bonds.

sp2 hybridization: In ethene, carbon sp2 hybridizes, because one π (pi) bond is required for the double bond between the carbons, and only three σ bonds form per carbon atom. 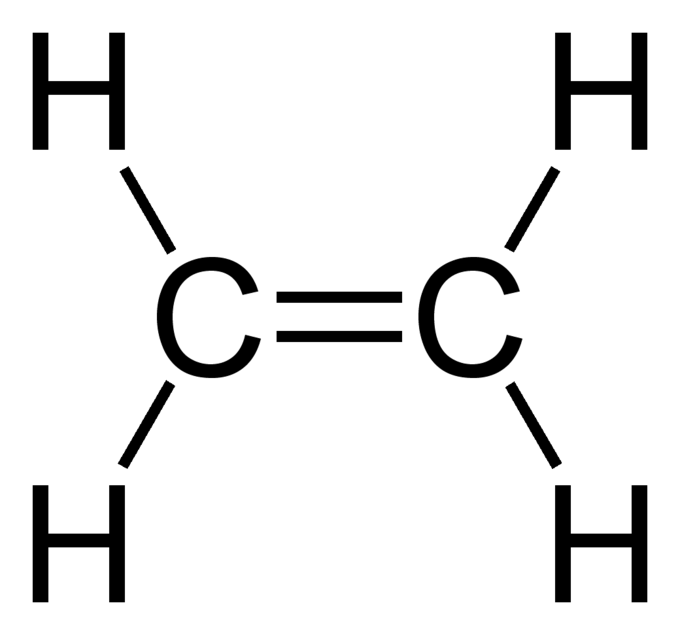 Ethene structure: Ethene has a double bond between the carbons.

sp hybridization explains the chemical bonding in compounds with triple bonds, such as alkynes; in this model, the 2s orbital mixes with only one of the three p-orbitals, resulting in two sp orbitals and two remaining p-orbitals. The chemical bonding in acetylene (ethyne) (C2H2) consists of sp-sp overlap between the two carbon atoms forming a sigma bond, as well as two additional pi bonds formed by p-p overlap. Each carbon also bonds to hydrogen in a sigma s-sp overlap at 180° angles.

Lewis structure of ethyne, which contains a triple bond: The sp hybridized orbitals are used to overlap with the 1s hydrogen orbitals and the other carbon atom. The remaining, non-hybridized p-orbitals overlap for the double and triple pi bonds.

sp hybridisation: In this model, the 2s orbital mixes with only one of the three p-orbitals, resulting in two sp-orbitals and two remaining unchanged p-orbitals.