Apply two different lines of reasoning—inductive and deductive—to consciously make sense of observations and reason with the audience.

Demonstrate the use of inductive and deductive reasoning

Reason is the capacity for consciously making sense of things. Reason, or “reasoning,” is associated with thinking, cognition, and intelligence. It is the means by which rational beings understand cause and effect, truth and falsehood, validity, and what is good or bad. The result is a reason that could then be used to explain or justify some event, phenomenon, or behavior.

As you develop arguments for your persuasive speech, you are likely to engage in two different lines of reasoning: inductive, which uses associations, and deductive.

Inductive reasoning, also known as induction, is a kind of reasoning that constructs general propositions that are derived from specific examples based on previous observations. One important aspect of inductive reasoning is associative reasoning: seeing or noticing similarity among the different events or objects that you observe. For example, if you throw a ball in the air and it comes back down, again and again, you observe the same event happening and are likely to conclude that when you kick a ball in the air, it will come back down.

Inductive reasoning is probabilistic; it only states that, given the premises, the conclusion is probable. Consider these simple logical statements, known as syllogisms. Here is a statistical syllogism to illustrate inductive reasoning:

Here is another stronger example:

This argument could have been made every time a new life form was found, and would have been correct every time. While it is possible that in the future a life form that does not require water will be discovered, in the absence of other factors, the conclusion is probably correct, as it has been in the past.

Inductive reasoning is used to determine properties or relationships based on previous observations or experiences, and then to formulate general statements or laws based on limited observations of recurring phenomenal patterns. The conclusion of an inductive argument follows with some degree of probability. 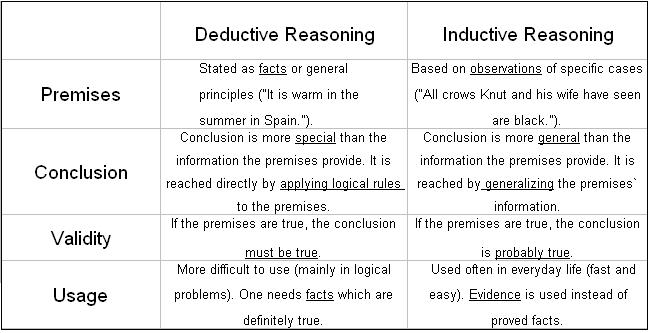 Deductive and Inductive Reasoning: There are key differences between deductive and inductive reasoning.

Deductive reasoning, also called deductive logic, is the process of reasoning from one or more general statements, laws, or principles regarding what is known, in order to reach a logically certain conclusion. Deductive reasoning involves using given, true premises to reach a conclusion that is also true. If you accept or know the general principle as true, then you can apply it to the specific case to conclude that it is also true.

Consider the general principle of the law a gravity: what goes up must come down. Now, when you throw the ball in the air, you conclude that it will fall down based on your knowledge of the general law of gravity. Deductive reasoning contrasts with inductive reasoning in that a specific conclusion is arrived at from the general principle when reasoning deductively. If the rules and logic of deduction are followed, this procedure ensures an accurate conclusion. Here is a classic example of a deductive argument:

The first premise states that all objects classified as “men” have the attribute “mortal. ” The second premise states that “John” is classified as a “man”—a member of the class or group of “men. ” The conclusion then states that “John” must be “mortal” because he inherits this attribute from his classification as a “man. ” If both premises are true, the terms are clear, and the rules of deductive logic are followed, then the conclusion of the argument follows by logical necessity.

Explain how to construct a rational appeal

A rational appeal uses logical arguments and factual evidence to persuade individuals that whatever thesis you are supporting is viable and likely to result in the obtainment of goals. When you focus on rational appeals you are dealing with the mind and cognition of the audience.

The Mind: When you focus on rational appeals, you are dealing with the audience’s mind and cognition.

The study of rhetoric has historically focused on three types of persuasive appeals– ethos , pathos , and logos. Our focus on reasoning and how you to use evidence to reason with your audience is part of the study of logos. Additionally, you are concerned with invention, which is the first of the five canons of rhetoric identified by Cicero, the classical Roman rhetorician. Invention is how you formulate arguments based on logos–rational appeal or logic.

When you appeal to reason you use logically constructed arguments using your evidence to persuade your audience to agree with you. You might use many different forms of evidence to support your rational appeal. Basically, the burden of proof is on you the speaker as you develop your appeals to the audience. As you deploy a rational appeal consider: Is my reasoning sound, and what will the audience accept as a believable evidence?

Is Your Reasoning Sound?

Prior to your speech, it is important to consider the soundness of your evidence and reasoning.

If you are quoting an authority and drawing conclusions from the authority, it is important to ask if the audience will accept or believe the authority. Remember to quote or use sources that the audience is familiar and will believe; using other authorities or sources will likely not be productive.

Inductive reasoning: If you are engaging in inductive reasoning, you will want to consider whether you have observed or collected enough evidence to draw a highly probable conclusion. Or, did you draw a hasty conclusion based on too few examples or observations?

If you are using statistical evidence as part of your inductive reasoning, it is important to consider how the data was collected and whether it is truly valid. If you do not have valid statistical data, then the inductions will not be valid. Before using any data, ask:

Associative reasoning (analogy): When engaging in associative reasoning, you will want to make sure that the ideas are indeed similar and that there are no obvious or outstanding differences which would negate the association in the mind of your audience.

Address Resistance and Concerns of the Audience

Finally, in persuasive situations it is important to anticipate the potential resistance and counterarguments your audience might feel. When you have a sense of what objections the audience might raise, you can and should address the most significant points of disagreement in your message.

Arguments from reason (logical arguments) have some advantages, namely that data are (ostensibly) difficult to manipulate, so it is harder to argue against such an argument; and such arguments make the speaker look prepared and knowledgeable to the audience, enhancing ethos. In addition, if you have built ethos with the audience then it will enhance your appeal with arguments from reason.

A fallacy is an error in reasoning; there are two basic categories of fallacies–formal and informal.

Give examples of formal and informal logical fallacies

Errors in reasoning–formal and informal

A fallacy is an error in reasoning. There are two basic categories of fallacies–formal and informal.

Consider an example with a visualization of faulty reasoning involving categorical deduction. 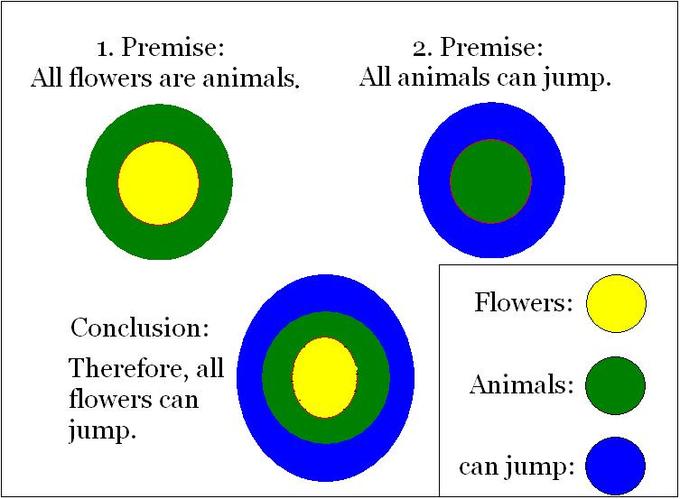 Categorical Deduction: Deductive reasoning can be valid, while the major premise is not valid.

As a speaker you want to carefully consider your reasoning and how you draw your logical conclusions in order to avoid faulty reasoning.