A firm’s production outputs are what it creates using its resources: goods or services.

Identify how suppliers determine what and how much to supply

Production outputs are the goods and services created in a given time period, by a firm, industry or country. These goods can either be consumed or used for further production. Production outputs can be anything from crops to technological devices to accounting services. Producing these outputs incur costs which must be considered when determining how much of a good should be produced.

Determining what to produce and how much to produce can be difficult. Microeconomics assumes that firms and businesses are profit-seeking. This means that above all else they will produce goods and services to the degree that maximizes their profits. In economic theory, the profit-maximizing amount of output in occurs when the marginal cost of producing another unit equals the marginal revenue received from selling that unit. When the product’s marginal costs exceeds marginal revenue, the firm should stop production.

Production Conditions: A firm will seek to produce such that its marginal cost (MC) is equal to marginal revenue (MR, which is equal to the price and demand). It is not produced based on average total cost (ATC).

Once a firm has established what its profit-maximizing output is, the next step it must consider is whether to produce the good given the current market price. There are several key terms to be familiar with prior to addressing this question.

There are four different types of conditions that generally describe a firm’s profit as described in:

Labor, capital, and land are the three necessary inputs for any production process.

Explain the use of capital and labor in production

The process of production generates output, otherwise referred to as good and services. Production processes require three inputs: land, capital and labor. Land is simply the place where you produce your product, whether it is a factory or a farm, and may included capital if the output being created is a service. In most scenarios, the inputs in the production process are primarily capital and labor.

Capital, otherwise known as capital assets, are manufactured goods that are used in production of goods or services. Control of these assets are the primary means of creating wealth. Included in capital is anything that has been manufactured that can be used to enhance a person’s ability to perform economically useful work. For a caveman, a stick or a stone would have been considered capital. For a post-industrial worker, a laptop, computer, and cellphone would be considered capital. 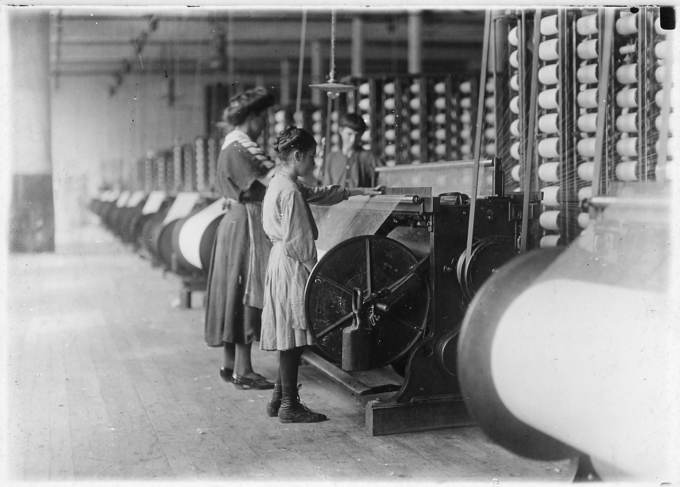 Girls running warping machines in Loray Mill, Gastonia, N.C. by Lewis Hine, 1908.: Any tool or machine that could be used to improve someone’s ability to work would be included in capital.

Labor is a measure of the work done by human beings to create a manufactured output. Producers demand labor because it aids in producing output which can then be sold. In production, a worker will only be hired when the marginal revenue s/he brings in exceeds or equals the marginal cost of hiring that worker. The cost of one worker is the wage.

The value of labor varies based on the skills and talents that the individual worker brings to that job. If the job involves designing and building a computer, an engineer’s labor is more valuable than a tailor. If the job requires the manufacture of a suit, an employer would prefer the tailor. Other elements that influence the perception of the value of a specific type of labor in production include the amount of training necessary to execute the task and the barriers to conducting that type of work.

The process of producing and distributing a good or service is called a supply chain, and it is composed of many economic actors.

A supply chain is a system of organizations, people, activities, information and resources involved in moving a product or service from supplier to customer. The company’s supply chain illustrates the total process of transforming raw materials into a finished product, and then selling that finished product to consumers. 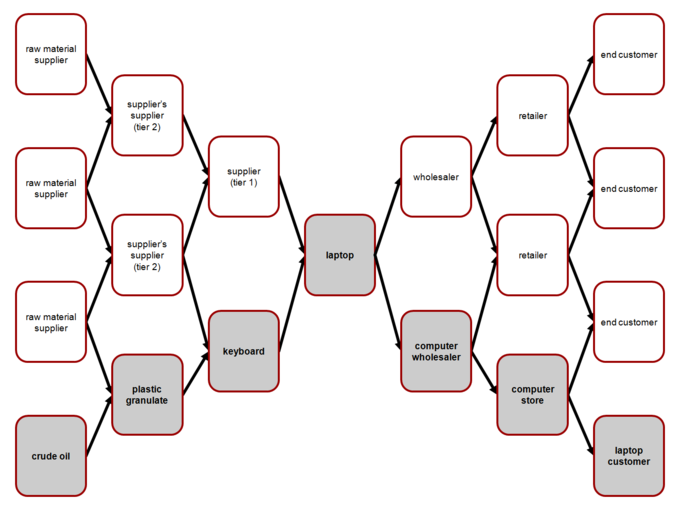 Supply Chain: This represents the typical supply chain for a computer. The right half of the chart represents the steps it takes from producing the final product to the consumers.

Supply chains vary based on industry, the resources of the manufacturer, and market conditions. Some typical elements and actors in a supply chain include:

The key difference between centrally planned and market economies is the degree of individual autonomy.

Compare the characteristics of capitalist and socialist economic systems

While there are many different variations of national economies, the two dominant economic coordination mechanisms are centrally planned and market based. Before you can analyze any national economy, you need to understand these two opposing viewpoints on how to run an economy. The key difference between the two is the amount of individual autonomy within the two systems.

A pure planned economy has one person or group who controls what is produced; all businesses work together to produce goods and services that are planned and distributed by the government. These economies are also called command economies because everyone must follow specific guidelines set up by the controlling authority. The reason behind this type of planning is to make sure that everything needed is produced and that everyone’s needs are fulfilled. Since most peoples’ needs are provided for in a centrally planned economy, compensation is primarily morally based. Most assets are owned by the state.

Planned economies have several advantages. Ideally, there is no unemployment and needs never go unfulfilled. Because the government knows how much food, medicine, and other goods is needed, it can produce enough for all. But achieving these outcomes depends on the group that organizes production and distribution to accurately identify what the consumers will need, determine what it would take to meet those goals, and anticipate all possible situations. This means there are a lot of opportunities to make a mistake. Realistically, these systems tend to suffer from large inefficiencies and are overall not as successful as other types of economic systems. 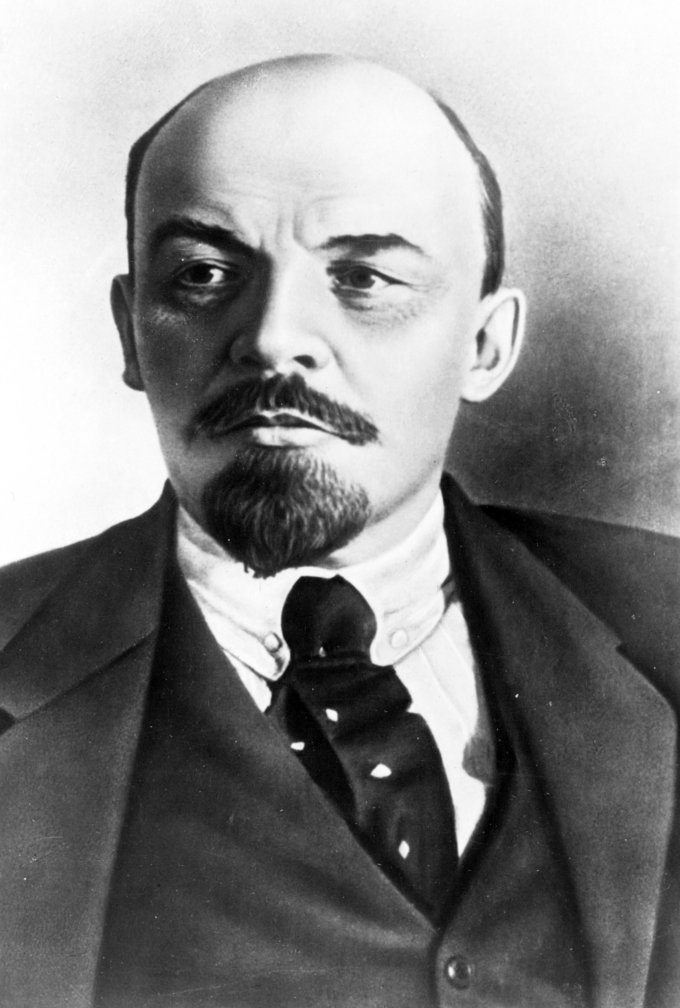 V.I. Lenin: The Soviet Union, as established by V.I. Lenin, is an example of a country that tried to establish a pure centrally planned economy.

A pure market economy, or capitalist system, is one perfectly free from external control. Individuals may decide what to produce, who to work for, and how to get the things they need. They are compensated with material goods for their work, and most assets are privately owned. This type of economy, though it may be chaotic at times, allows people to change along with the shifting market conditions to maximize their profits. Although they avoid many of the inadequacies of planned economies, market economies are not free of their own problems and downfalls. Perhaps the greatest problem is that business firms may refuse to produce goods that unprofitable for them. For instance, in 2000 there was a shortage of tetanus vaccine in the United States. Because it was expensive to make, most companies were unwilling to start production themselves, leaving only one firm struggling to keep up with demand. In a planned economy, this shortage would not happen because the government would boost production of the vaccine if it were needed.

Because there is no regulation to ensure equality and fairness, market economies may be burdened with unemployment and even those with jobs can never be certain that they will make enough to provide for all of their needs. Despite these and other problems, market economies come with many advantages, chief among which is speed. Because they do not need to wait for word from the government before changing their output, companies under market economies can quickly keep up with fluctuations in the economy, tending to be more efficient than regulated markets. Also, individuals have more freedom and opportunities to do the jobs they want and to profit by them.

A mixed economy is a system that embraces elements of centrally planned and free market systems.

Explain the characteristics of a mixed economy

A mixed economy is a system that embraces elements of centrally planned and free market systems. While there is no single definition of a mixed economy, it generally involves a degree of economic freedom mixed with government regulation of markets. Most modern economies are mixed, including the United States and Cuba. Countries hope that by embracing elements of both systems they can gain the benefits of both while minimizing the systems disadvantages.

In general, most of the means of production in a mixed economy are privately owned. There are some exceptions to this general rule, such as some hospitals and businesses. The mostly private ownership of all means of production allows the market to quickly respond to changing circumstances and economic factors. As a result, the market is generally the dominant form of economic coordination. However, to mitigate the negative influence that a pure market economy has on fairness and distribution, the government strongly influences the economy through direct intervention in a mixed economy. Different ways a government directly intervenes in an economy include:

Most government intervention in mixed economy is limited to minimizing the negative consequences of economic events, such as unemployment in recessions, to promote social welfare.

However, the government in mixed economies generally subsidizes public goods, such as roads and libraries, and provide welfare services such as social security. These governments also regulate labor and protect intellectual property.