A fractional reserve system is one in which banks hold reserves whose value is less than the sum of claims outstanding on those reserves.

Examine the impact of fractional reserve banking on the money supply

Banks operate by taking in deposits and making loans to lenders. They are able to do this because not every depositor needs her money on the same day. Thus, banks can lend out some of their depositors’ money, while keeping some on hand to satisfy daily withdrawals by depositors. This is called the fractional-reserve banking system: banks only hold a fraction of total deposits as cash on hand.

Because banks are only required to keep a fraction of their deposits in reserve and may loan out the rest, banks are able to create money. To understand this, imagine that you deposit $100 at your bank. The bank is required to keep $10 as reserves but may lend out $90 to another individual or business. This loan is new money; the bank created it when it issued the loan. In fact, the vast majority of money in the economy today comes from these loans created by banks. Likewise when a loan is repaid, that money disappears from the economy until the bank issues another loan.

Money Creation in a Fractional Reserve System: The diagram shows the process through which commercial banks create money by issuing loans.

Why Have Reserve Requirements?

Fractional-reserve banking ordinarily functions smoothly. Relatively few depositors demand payment at any given time, and banks maintain a buffer of reserves to cover depositors’ cash withdrawals and other demands for funds. However, banks also have an incentive to loan out as much money as possible and keep only a minimum buffer of reserves, since they earn more on these loans than they do on the reserves. Mandating a reserve requirement helps to ensure that banks have the ability to meet their obligations.

Example Transactions Showing How a Bank Can Create Money

The amount of money created by banks depends on the size of the deposit and the money multiplier.

Calculate the change in money supply given the money multiplier, an initial deposit and the reserve ratio

To understand the process of money creation, let us create a hypothetical system of banks. We will focus on two banks in this system: Anderson Bank and Brentwood Bank. Assume that all banks are required to hold reserves equal to 10% of their customer deposits. When a bank’s excess reserves equal zero, it is loaned up.

Anderson and Brentwood both operate in a financial system with a 10% reserve requirement. Each has $10,000 in deposits and no excess reserves, so each has $9,000 in loans outstanding, and $10,000 in deposit balances held by customers.

Suppose a customer now deposits $1,000 in Anderson Bank. Anderson will loan out the maximum amount (90%) and hold the required 10% as reserves. There are now $11,000 in deposits in Anderson with $9,900 in loans outstanding.

In the above example the deposit multiplier is 1/0.1, or 10. Thus, with a required reserve ratio of 0.1, an increase in reserves of $1 can increase the money supply by up to $10.

Money Creation and Reserve Requirements: The graph shows the total amount of money that can be created with the addition of $100 in reserves, using different reserve requirements as examples.

The Money Multiplier in Theory

The money multiplier measures the maximum amount of commercial bank money that can be created by a given unit of central bank money.

Explain how the money multiplier works in theory

The above equation states that the total supply of commercial bank money is, at most, the amount of reserves times the reciprocal of the reserve ratio (the money multiplier). 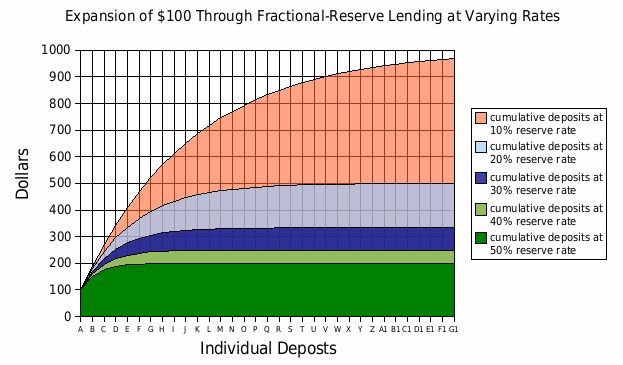 Money Creation and the Money Multiplier: The graph shows the theoretical amount of money that can be created with different reserve requirements.

The Money Multiplier in Reality

In reality, it is very unlikely that the money supply will be exactly equal to reserves times the money multiplier.

First, some banks may choose to hold excess reserves. In the decades prior to the financial crisis of 2007-2008, this was very rare – banks held next to no excess reserves, lending out the maximum amount possible. During this time, the relationship between reserves, reserve requirements, and the money supply was relatively close to that predicted by economic theory. After the crisis, however, banks increased their excess reserves dramatically, climbing above $900 billion in January of 2009 and reaching $2.3 trillion in October of 2013. The presence of these excess reserves suggests that the reserve requirement ratio is not exerting an influence on the money supply. 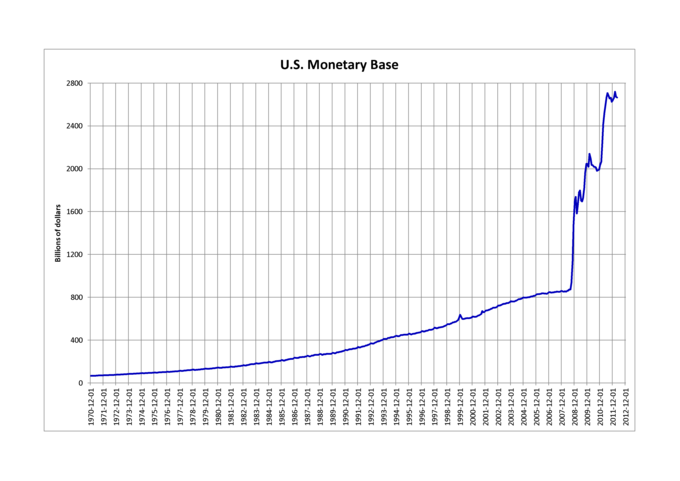 Second, customers may hold their savings in cash rather than in bank deposits. Recall that when cash is stored in a bank vault it is included in the bank’s supply of reserves. When it is withdrawn from the bank and held by consumers, however, it no longer serves as reserves and banks cannot use it to issue loans. When people hold more cash, the total supply of reserves available to banks goes down and the total money supply falls.

Third, some loan proceeds may not be spent. Imagine that the reserve requirement ratio is 10% and a customer deposits $1,000 into a bank. The bank then uses this deposit to make a $900 loan to another one of its customers. If the customer fails to spend this money, it will simply sit in the bank account and the full multiplier effect will not apply. In this case, the $1,000 deposit allowed the bank to create $900 of new money, rather than the $10,000 of new money that would be created if the entire loan proceeds were spent.