In an open economy, equilibrium is achieved when no external influences are present; the state of equilibrium between the variables will not change.

Summarize the factors that determine the macroeconomic equilibrium state

An open economy allows a country to spend more or less than what it earns through the output of goods and services every year. When a country spends more than it make, it borrows money from abroad. If a country saves more money than it makes, it can lend the difference to foreigners.

The amount that a country saves is total of investment and net exports:

[latex]NX[/latex] can also be considered the trade balance of a country. Therefore

Consider, for example, what happens if domestic interest rates rise relative to foreign interest rates. Savings will increase and investment will drop as investors borrow and invest abroad instead. The balance of trade will increase, affecting the health of the economy. In an open economy, market actors can choose to save, spend, and invest either domestically or internationally, so relative changes affect not only the flow of capital, but also the health of the economy as a whole.

Equilibrium: The graph shows that the point of equilibrium is where the supply and demand are equal. In an open economy, equilibrium is achieved when the amount demanded by consumers is equal to the amount of a goods or service provided by producers.

There are three properties of equilibrium:

In an open economy, equilibrium is reached through the price mechanism. For example, if there is excess supply (market surplus), this would lead to prices cuts which would decrease the quantity supplied (reduces the incentive to produce and sell the product) and increase the quantity demanded (by offering bargains), which would eliminate the original excess of supply. The interest rates also adjust to reach equilibrium. Although consumption does not always equal production, the net capital outflow does equal the balance of trade. The capital flows, which depend on interest rates and savings rates, also adjust to reach equilibrium.

Impacts of Policies and Events on Equilibrium

Government policies and outside events may affect the macroeconomic equilibrium by shifting aggregate supply or aggregate demand.

One type of event that can shift the equilibrium is a supply shock. This is an event that suddenly changes the price of a commodity or service. It may be caused by a sudden increase or decrease in the supply of a particular good, which in turn affects the equilibrium price. A negative supply shock (sudden supply decrease) will raise prices and shift the aggregate supply curve to the left. A negative supply shock can cause stagflation due to a combination of raising prices and falling output. A positive supply shock (an increase in supply) will lower the price of said good by shifting the aggregate supply curve to the right. A positive supply shock could be an advance in technology (a technology shock) which makes production more efficient, thus increasing output. 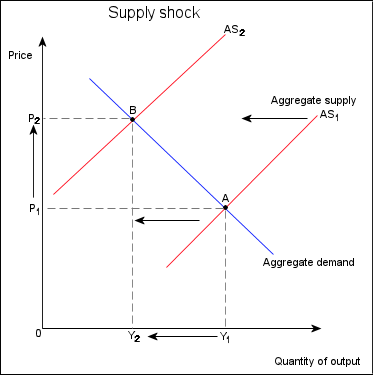 Supply Shock and Equilibrium: A supply shock shifts the aggregate supply curve. In this case, a negative supply shock raises prices and lowers output in equilibrium.

One extreme case of a supply shock is the 1973 Oil Crisis. When the U.S. chose to support Israel during the Yom Kippur War, the Organization of Arab Petroleum Exporting Countries (OAPEC) responded with an oil embargo, which increased the market price of a barrel of oil by 400%. This supply shock in turn contributed to stagflation and persistent economic disarray.

Inflation can result from increased aggregate demand, but can also be caused by expansionary monetary policy or supply shocks that cause large price changes. Changes in prices can shift aggregate demand, and therefore the macroeconomic equilibrium, as a result of three different effects:

Trade policies can shift aggregate demand. Protectionism, for example, is a policy that interferes with the free workings of the international marketplace. By implementing protectionism policies such as tariffs and quotas, a government can make foreign goods relatively more expensive and domestic goods relatively cheaper, increasing net exports and therefore aggregate demand. Since the world demands more goods produced in the home country, the demand for the domestic currency increases and the exchange rate rises.

Capital flight occurs when assets or money rapidly flow out of a country due to an event of economic consequence. Such events could be an increase in taxes on capital or capital holders, or the government of the country defaulting on its debt that disturbs investors and causes them to lower their valuation of the assets in that country, or otherwise to lose confidence in its economic strength.

This leads to an increase in the supply of the local currency and is usually accompanied by a sharp drop in the exchange rate of the affected country. This leads to dramatic decreases in the purchasing power of the country’s assets and makes it increasingly expensive to import goods. Net exports rise as a component of aggregate demand.

Effect of a Government Budget Deficit on Investment and Equilibrium

A budget deficit will typically increase the equilibrium output and prices, but this may be offset by crowding out.

Evaluate the consequences of imbalances in the government budget

A government’s budget balance is determined by the difference in revenues (primarily taxes) and spending. A positive balance is a surplus, and a negative balance is a deficit. The consequences of a budget deficit depend on the type of deficit.

U.S. Budget Deficits: The graph shows the budget deficits and surpluses incurred by the U.S. government between 1901 and 2006. Although deficits may have an expansionary effect, this is not the primary purpose of running a deficit.

A cyclical deficit is a deficit incurred due to the ups and downs of a business cycle. At the lowest point in the business cycle, there is a high level of unemployment. This means that tax revenues are low and expenditures (e.g., on social security and unemployment benefits) are high, naturally leading to a budget deficit. Conversely, at the peak of the cycle, unemployment is low, increasing tax revenue and decreasing spending, which leads to a budget surplus. The additional borrowing required at the low point of the cycle is the cyclical deficit. By definition, the cyclical deficit will be entirely repaid by a cyclical surplus at the peak of the cycle.

This type of budget deficit serves as a stabilizer, insulating individuals from the effects of the business cycle without any specific legislation or other intervention. This is because budget deficits can have stimulative effects on the economy, increasing demand, spending, and investment. Higher spending on transfer payments puts more money into the economy, supporting demand and investment. Furthermore, lower revenues mean that more money is left in the hands of individuals and businesses, encouraging spending. As the economy grows more quickly, the budget deficit falls and the fiscal stimulus is slowly removed.

The structural deficit is the deficit that remains across the business cycle because the general level of government spending exceeds prevailing tax levels. Structural deficits are permanent, and occur when there is an underlying imbalance between revenues and expenses.

This is the budget gap still exists when the economy is at full employment and producing at full potential output levels. It can only be closed by increasing revenues or cutting spending. Unlike the cyclical budget deficit, a structural deficit is the result of discretionary, not automatic, fiscal policy. While automatic stabilizers don’t actually shift the aggregate demand curve (because transfer payments and taxes are already built into aggregate demand), discretionary fiscal policy can shift the aggregate demand curve. For example, if the government decides to implement a new program to build military aircraft without adjusting any sources of revenue, aggregate demand will shift to the right, raising prices and output.

Although both types of government budget deficits are typically expansionary during a recession, a structural deficit may not always be expansionary when the economy is at full employment. This is due to a phenomenon called crowding out. When an increase in government expenditure or a decrease in government revenue increases the budget deficit, the Treasury must issue more bonds. This reduces the price of bonds, raising the interest rate. The increase in the interest rate reduces the quantity of private investment demanded (crowding out private investment). The higher interest rate increases the demand for and reduces the supply of dollars in the foreign exchange market, raising the exchange rate. A higher exchange rate reduces net exports. All of these effects work to offset the increase in aggregate demand that would normally accompany an increase in the budget deficit.