The long-run supply curve in a perfectly competitive market has three parts; a downward sloping curve, a flat portion, and an upwards sloping curve. 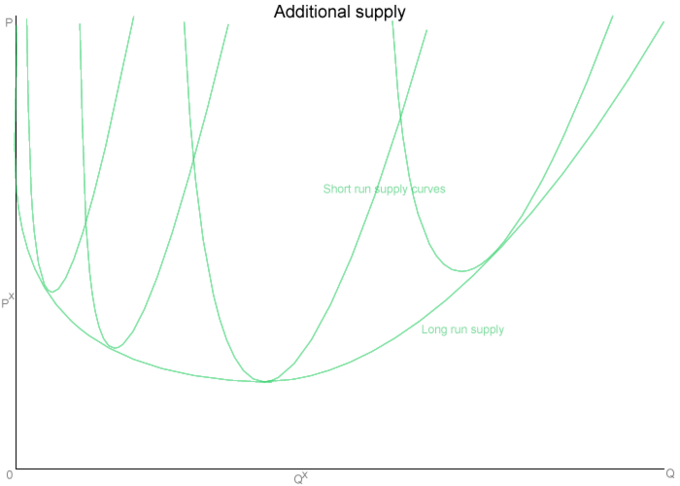 While most people focus on the second half of a supply curve, which has a positive slope, that is not how the supply and pricing decision works in practice. As you can see from the chart, the first items that are produced start out with a very high price. This is because it is very expensive for a producer to manufacture one item. The producer has to incur fixed costs, such as learning the necessary skills to produce the item and purchasing new tools. These initial fixed costs make the cost of producing one good very expensive.

However, as more goods are produced, those initial fixed costs are spread out over more items. This decreases the price of per unit of each good produced for a period of time. As a result, in the early stages of production the supply curve is sloping downward as you can see in the chart. This period of supply is known as “increasing returns to scale,” because a proportional increase in resources yields a greater proportional increase in output.

The first short-run supply curve reflects what happens when a firm enters into a new market for the first time. When it does, it should make an economic profit. In a perfectly competitive market, firms can freely enter and exit an industry. When other business notice that the first firm is making it profit, they will enter the market to capture some of that profit and because there is nothing preventing them from doing so. In the early stages of the market, where only one or a few firms are producing goods, the market experiences increasing returns to scale, similar to what an individual firm would experience.

Eventually, production of goods in a market yields less of a return than the amount of goods that go into product, which causes the market to enter into a period of decreasing returns to scale and the market’s supply curve slopes upward.

The long-run equilibrium of a perfectly competitive market occurs when marginal revenue equals marginal costs, which is also equal to average total costs.

The long-run is the period of time where there are no fixed variables of production. As with any other economic equilibrium, it is defined by demand and supply.

In a perfect market, demand is perfectly elastic. The demand curve also represents marginal revenue, which is important to remember later when we calculate quantity supplied. That means regardless of how much is produced by the suppliers, the price will remain constant. 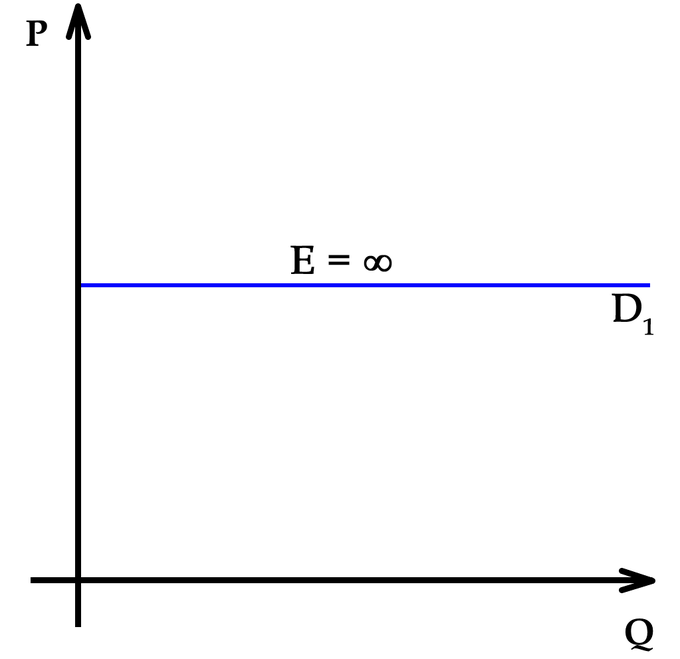 A perfectly competitive market in equilibrium has several important characteristics.

Productive efficiency occurs when production of a good is achieved at the lowest resource cost possible, given the level of production of other goods.

Describe the efficiency of production in perfectly competitive markets

Productive efficiency occurs when the economy is getting maximum output from its resources. The concept is illustrated on a production possibility frontier (PPF) where all points on the curve are points of maximum productive efficiency (i.e., no more output can be achieved from the given inputs). An equilibrium may be productively efficient without being allocatively efficient. In other words, just because a market maximizes the output it generates, that doesn’t mean that social welfare is maximized.

Production Possibilities on Frontier Curve: This chart shows production possibilities for production of guns and butter. Points B, C, and D are productively efficient and point A is not. Point X is only possible if the means of production improve.

Production efficiency occurs when production of one good is achieved at the lowest resource (input) cost possible, given the level of production of the other good(s). Another way to define productive efficiency is that it occurs when the highest possible output of one good is produced, given the production level of the other good(s). In long-run equilibrium for perfectly competitive markets, productive efficiency occurs at the base of the average total cost curve, or where marginal cost equals average total cost. Productive efficiency requires that all firms operate using best-practice technological and managerial processes. By improving these processes, an economy or business can extend its production possibility frontier outward, so that efficient production yields more output.

Free markets iterate towards higher levels of allocative efficiency, aligning the marginal cost of production with the marginal benefit for consumers.

The amount of value generated in a market that efficient equals the social value of the produced output minus the value of resources used in production. Optimal efficiency is higher in free markets, though reality always has some limitations and imperfections to detract from completely perfect allocative efficiency. Markets are not efficient if it is subject to: 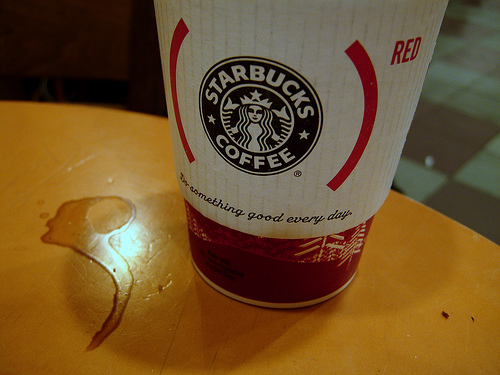 Final goods: When an economy has allocative efficiency, it produces goods and services that have the highest demand and that society finds most desirable. For example, for the U.S. to achieve an allocative efficient market, it would need to produce a lot of coffee.

Allocative efficiency is the main means to measure the degree markets and public policy improve or harm society or other specific subgroups.

Although there are different standards of evaluation for the concept of allocative efficiency, the basic principle asserts that in any economic system, choices in resource allocation produce both “winners” and “losers” relative to the choice being evaluated. The principles of rational choice, individual maximization, utilitarianism, and market theory further suppose that the outcomes for winners and losers can be identified, compared, and measured.

Under these basic premises, the goal of maximizing allocative efficiency can be defined according to some neutral principle where some allocations are objectively better than others. For example, an economist might say that a change in policy increases allocative efficiency as long as those who benefit from the change (winners) gain more than the losers lose.

Entry and Exit of Firms

The absence of barriers of entry and exit is a necessary condition for a market to be perfectly competitive.

Explain the entry and exit of firms in perfectly competitive markets.

Barriers to entry and exit are an important characteristics to consider when analyzing a market. In perfectly competitive markets, there are no barriers to entry or exit. This is a critical characteristic of perfectly competitive markets because firms are able to freely enter and exit in response to potential profit. Therefore, in the long-run firms cannot make economic profit but can only break even.

However, in most other types of markets barriers do exist. These types of barriers, defined below, prevent free entry to or exit from markets. 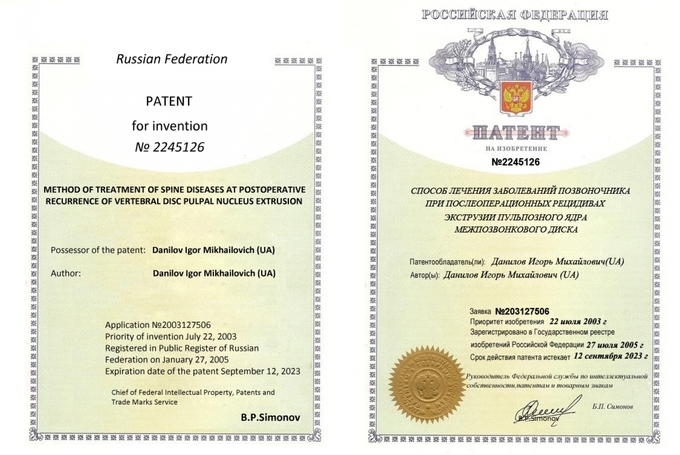 Barriers to exit are obstacles in the path of a firm which wants to leave a given market or industrial sector. These obstacles often cost the firm financially to leave the market and may prohibit it doing so. If the barriers of exit are significant; a firm may be forced to continue competing in a market, as the costs of leaving may be higher than those incurred if they continue competing in the market. The factors that may form a barrier to exit include: