Market power is a measure of a firm’s economic strength that affects its pricing and supply decisions.

Market power is a measure of the economic strength of a firm. It is the ability of a firm to influence the quantity or price of goods and services in a market. A firm is said to have significant market power when price exceeds marginal cost and long run average cost, so the firm makes economic profits. Such firms are often referred to as “price makers.” In contrast, firms with limited to no market power are referred to as “price takers.”

A firm usually has market power by virtue of controlling a large portion of the market. However, market size alone is not the only indicator of market power. Other factors that affect a firm’s market power include:

The numbers and size of firms determine the extent that firms can withstand pressures and threats to change prices or product flows. However, being a large firm does not necessarily equal market power. For example, while conglomerates may be very large, they may play only small roles in many different markets and have no ability to influence prices in any of them.

Common barriers to entry include control of a scarce resource, increasing returns to scale, technological superiority, and government-imposed barriers.

Google Logo: In 2012, the U.S. Federal Trade Commission opened an antitrust probe against Google’s search practices. Google allegedly used its market dominance to promote its own products over competitors’ products in web searches.

A monopoly, a price maker with market power, can raise prices and retain customers because the monopoly has no competitors. If a customer has no other place to go to obtain the goods or services, they either pay the increased price or do without.

An oligopoly may also be a price maker with market power, as firms may be able to collude and control the market price or quantity demanded.

A perfectly competitive firm, a price taker with no market power, cannot raise its price without losing its customers.

Measurement of market power is often accomplished with concentration ratios or the Herfindahl-Hirschman Index (HHI).

The Herfindahl-Hirschman Index (HHI) is a measure of the size of firms in relation to the industry, and an indicator of the amount of competition among them. The HHI is calculated by summing the squares of the percentage market shares of all participants in the market. The HHI for perfect competition is zero; for a monopoly, it is 10,000.

Producer surplus is the difference between the amount producers get for selling a good and the amount they want to accept for that good.

Producer surplus is the difference between what price producers are willing and able to supply a good for and what price they actually receive from consumers. It is the extra money, benefit, and/or utility producers get from selling a product at a price that is higher than their minimum accepted price, as shown by the supply curve. 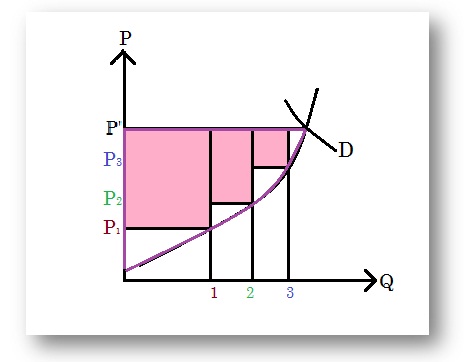 Producer surplus is affected by changes in price, the demand and supply curve, and the price elasticity of supply.

Producer surplus is affected by many different factors. Changes in the price level, the demand and supply curves, and price elasticity all influence the total amount of producer surplus, other things held constant.

Economic Surplus: The producer surplus is directly above the supply curve and is shaded in blue.

Producer Surplus and the Demand Curve: If the demand curve shifts out, producer surplus increases, as seen by size of the gray triangle.

When supply is perfectly elastic, it is depicted as a horizontal line. Producer surplus is zero because the price is not flexible. Producers cannot provide a higher price than market price.

When supply is perfectly inelastic, it is depicted as a vertical line. Producer surplus is infinite because the price is completely flexible.