A yield curve shows the relation between interest rate levels (or cost of borrowing) and the time to maturity.

Israel Shekel yield curve: This graph is an example of a yield curve on Israeli Non-Linked Fixed Rate government bonds.

Sometimes, treasury bond yield averages higher than that of treasury bills (e.g. 20-year Treasury yield rises higher than the three-month Treasury yield). In situations when this gap increases, the economy is expected to improve quickly in the future. This type of steep yield curve can be seen at the beginning of an economic expansion (or after the end of a recession). Here, economic stagnation will have depressed short-term interest rates. However, rates begin to rise once the demand for capital is re-established by growing economic activity.

There are three main economic theories attempting to explain different term structures of interest rates. Two of the theories are extreme positions, while the third attempts to find a middle ground between the former two.

The expectation hypothesis of the term structure of interest rates is the proposition that the long-term rate is determined by the market’s expectation for the short-term rate plus a constant risk premium. Shortcomings of expectations theory is that it neglects the risks inherent in investing in bonds, namely interest rate risk and reinvestment rate risk.

The liquidity premium theory asserts that long-term interest rates not only reflect investors’ assumptions about future interest rates, but also include a premium for holding long-term bonds (investors prefer short term bonds to long term bonds), called the term premium or the liquidity premium. This premium compensates investors for the added risk of having their money tied up for a longer period, including the greater price uncertainty. Because of the term premium, long-term bond yields tend to be higher than short-term yields, and the yield curve slopes upward. Long term yields are also higher not just because of the liquidity premium, but also because of the risk premium added by the risk of default from holding a security over the long term.

Using the Yield Curve to Estimate Interest Rates in the Future

Yield curves on bonds and government provided securities are correlative, and are useful in projected future rates.

For debt contracts, the overall duration of time of the debt security coupled with the interest rate compounded over that time frame will illustrate the overall yield of the security during its lifetime. This is referred to as a yield curve. When this is applied to U.S. treasury securities in respect to interest rates, useful information regarding projected interest rates in the future over time can be estimated. This is carefully monitored by many traders, and utilized as a point of comparison or benchmark for other investments (particularly valuation of bonds). 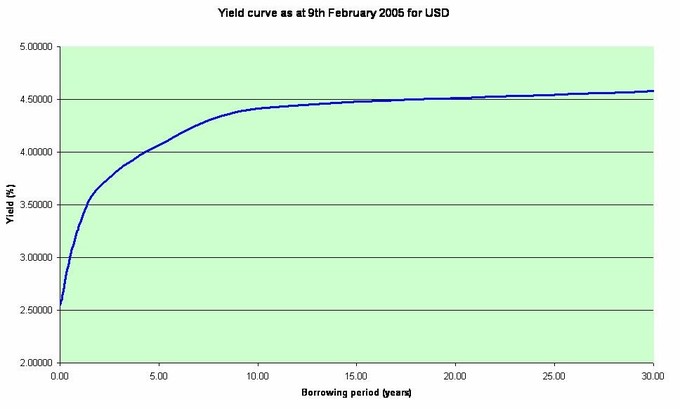 Yield Curve Example: This yield curve from 2005 demonstrates the projected yield over time of USD. As you can see, this is a typical yield curve shape, as the longer the contract is held out the higher the rate of return (with diminishing returns).

Relationship to the Business Cycle

Through assessing the slope of a yield curve on debt instruments such as governmental treasury bonds, investors can estimate the overall health of the economy in the future (i.e. inflation, interest rates, recessions, growth). Inverted yield curves are typically predictors of recession, while positively sloped yield curves indicate inflationary growth.

(ist and ilt are the expected short-term and actual long-term interest rates, respectively)

When it comes to predicting future interest rates, the Heath-Jarrow-Morton framework is considered a standard approach. It focuses on modeling the evolution of the interest rate curve (instantaneous forward rate curve in particular). The equation itself is a rather evolved derivation, incorporating bond prices, forward rates, risk free rates, the Wiener process, Leibniz’s rule, and Fubini’s Theorem. While the details of this calculation are a bit outside the scope of discussion here, the equation can ultimately be described as:

For the sake of this discussion, it suffices to say that the input of existing yield curves is useful in projected future interest rates under a number of varying perspectives.

Describe how the nominal interest rate is influenced by inflation, output, and other economic conditions

An interest rate is the rate at which interest is paid by a borrower for the use of money that they borrow from a lender in the market. The interest rates are influenced by macroeconomic factors. In economics, a Taylor rule is a monetary-policy rule that stipulates how much the Central Bank should change the nominal interest rate in response to changes in inflation, output, or other economic conditions. In particular, the rule stipulates that for each 1% increase in inflation, the Central Bank should raise the nominal interest rate by more than one percentage point. 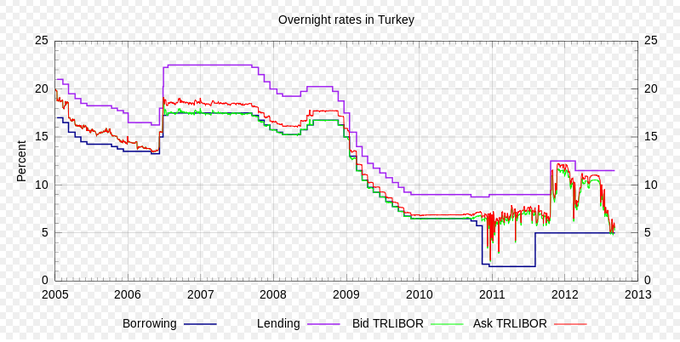 Interest Rates in Turkey: Overnight rates in Turkey are estimated to fall in 2013, indicating a loosened monetary policy.

According to Taylor’s original version of the rule, the nominal interest rate should respond to divergences of actual inflation rates from target inflation rates and of actual Gross Domestic Product (GDP) from potential GDP:

In this equation, it is the target short-term nominal interest rate (e.g., the federal fund rates in the United States), πt is the rate of inflation as measured by the GDP deflator, π*t is the desired rate of inflation, r*t is the assumed equilibrium real interest rate, yt is the logarithm of real GDP, and y*t is the logarithm of potential output, as determined by a linear trend.

In other words, (πt – π*t)is inflation expectations that influence interest rates. Most economies generally exhibit inflation, meaning a given amount of money buys fewer goods in the future than it will now. The borrower needs to compensate the lender for this. If the inflationary expectation goes up, then so does the market interest rate and vice versa.

The GDP gap or the output gap is (yt – y*t). If this calculation yields a positive number, it is called an “inflationary gap” and indicates the growth of aggregate demand is outpacing the growth of aggregate supply (or high level of employment), possibly creating inflation, signaling an increase in interest rates made by the Central Bank; if the calculation yields a negative number it is called a “recessionary gap,” which is accompanied by a low employment rate, possibly signifying deflation and a reduction in interest rates.

In this equation, both απ and αy should be positive (as a rough rule of thumb, Taylor’s 1993 paper proposed setting απ =αy = 0.5). That is, the rule “recommends” a relatively high interest rate (a “tight” monetary policy) when inflation is above its target or when output is above its full-employment level, in order to reduce inflationary pressure. It recommends a relatively low interest rate (“easy” monetary policy) in the opposite situation to stimulate output.