Financial Management Outside of the U.S.

An exchange rate between two currencies is the rate at which one currency will be exchanged for another. 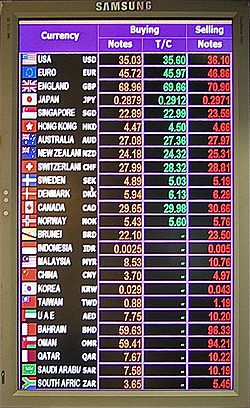 Quotes using a country’s home currency as the price currency (e.g., EUR 0.735342 = USD 1.00 in the eurozone) are known as direct quotation or price quotation (from that country’s perspective) and are used by most countries.

Quotes using a country’s home currency as the unit currency (e.g., EUR 1.00 = USD 1.35991 in the eurozone) are known as indirect quotation or quantity quotation and are used in British newspapers and are also common in Australia, New Zealand, and the eurozone.

A market based exchange rate will change whenever the values of either of the two component currencies change. A currency will tend to become more valuable whenever demand for it is greater than the available supply. It will become less valuable whenever demand is less than available supply (this does not mean people no longer want money, it just means they prefer holding their wealth in some other form, possibly another currency).

There are many factors that impact exchange rates, such as inflation, interest rates, balance of payments, and government policy.

Exchange rates can also be affected by the balance of payment. The balance of payment model holds that a foreign exchange rate must be at its equilibrium level, which is the rate which produces a stable current account balance. A nation with a trade deficit will experience a reduction in its foreign exchange rate reserves, which ultimately lowers (depreciates) the value of its currency. The cheaper currency renders the nation’s goods (exports) more affordable in the global marketplace while making imports more expensive. After an intermediate period, imports are forced down and exports rise, thus stabilizing the trade balance and the currency toward equilibrium.

Countries may gain an advantage in international trade if they manipulate the value of their currency by artificially keeping its value low, typically by the national central bank engaging in open market operations. It is argued that the People’s Republic of China has succeeded in doing this over a long period of time. In 2010, other nations, including Japan and Brazil, attempted to devalue their currency in the hopes of subsidizing cheap exports and bolstering their ailing economies. A low exchange rate lowers the price of a country’s goods for consumers in other countries but raises the price of goods, especially imported goods, for consumers in the manipulating country.