Financial Management Outside of the U.S.

Explain the differences between short-run, long-run and translation exposure

A firm has transaction exposure/ short-term exposure whenever it has contractual cash flows (receivables and payables) whose values are subject to unanticipated changes in exchange rates due to a contract being denominated in a foreign currency. To realize the domestic value of its foreign-denominated cash flows, the firm must exchange foreign currency for domestic currency. As firms negotiate contracts with set prices and delivery dates in the face of a volatile foreign exchange market with exchange rates constantly fluctuating, the firms face a risk of changes in the exchange rate between the foreign and domestic currency. 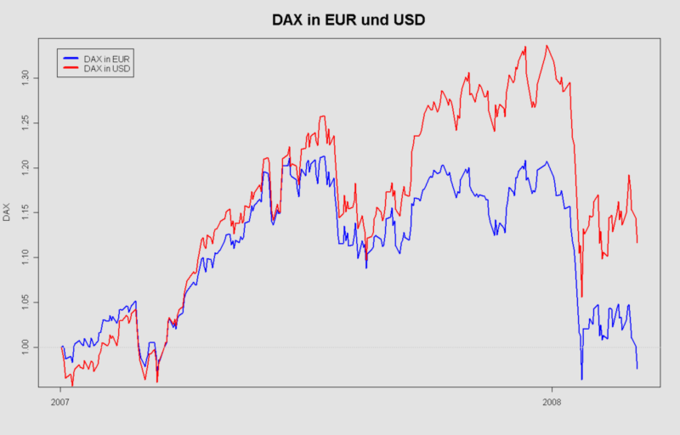 Foreign currency exposure: DAX appreciated in the early 2008, presenting a short-run exchange exposure to companies paying DAX to its suppliers.

A firm’s translation exposure is the extent to which its financial reporting is affected by exchange rate movements. As all firms generally must prepare consolidated financial statements for reporting purposes, the consolidation process for multinationals entails translating foreign assets and liabilities or the financial statements of foreign subsidiaries from foreign to domestic currency. While translation exposure may not affect a firm’s cash flows, it could have a significant impact on a firm’s reported earnings and therefore its stock price. Translation exposure is distinguished from transaction risk as a result of income and losses from various types of risk having different accounting treatments. Translation gives special consideration to assets and liabilities with regards to foreign exchange risk, whereas exposures to revenues and expenses can often be managed ex ante by managing transactional exposures when cash flows take place.

In finance, a forward contract, or simply a forward, is a non-standardized contract between two parties to buy or sell an asset at a specified future time at a price agreed upon today. The party agreeing to buy the underlying assets in the future assumes a long position, and the party agreeing to sell the asset in the future assumes a short position. The price agreed upon is called the delivery price, which is equal to the forward price at the time the contract is entered into. In the case of exchanges, when entering a forward contract the buyer hopes or expects that a currency is going to appreciate, while the seller hopes or expects that it will depreciate in near future. If the company is going to receive a large sum of foreign currency from customers as payment, it bears the risk that the currency will depreciate and the company will go “short” in a currency forward contract. If the company is going to pay its suppliers with foreign currency, it will instead go “long. ” 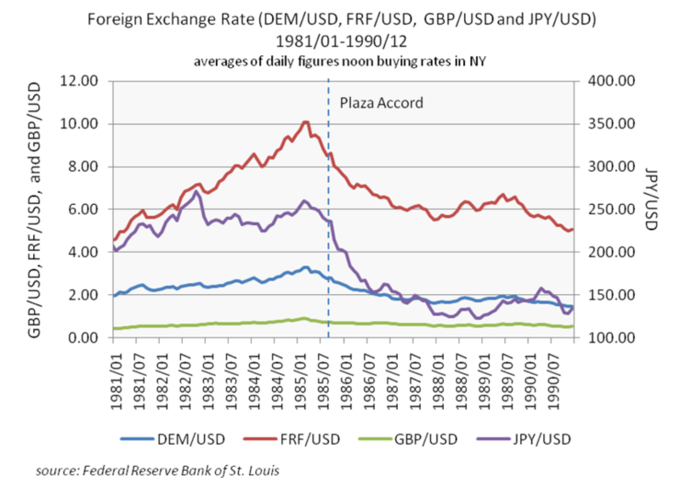 Foreign exchange rates: The exchange rate of GBP/ USD decreased from 1985 to 1987. One should go long GBP and short USD.

As money became a commodity, the money market became a component of the financial markets for assets involved in short-term borrowing, lending, buying, and selling, with original maturities of one year or less. Foreign exchange of currencies are among the more common money market instruments, exchanging a set of currencies in a spot date and the reversal of the exchange of currencies at a predetermined time in the future. The most common use of foreign exchange swaps occurs when institutions fund their foreign exchange balances. A foreign exchange swap consists of two legs: a spot foreign exchange transaction and a forward foreign exchange transaction.These two legs are executed simultaneously for the same quantity, and therefore offset each other. Once a foreign exchange transaction settles, the holder is left with a positive (or long) position in one currency, and a negative (or short) position in another. In order to collect or pay any overnight interest due on these foreign balances, at the end of every day institutions will close out any foreign balances and re-institute them for the following day. To do this they typically use tom-next swaps, buying (or selling) a foreign amount settling tomorrow, and then doing the opposite, selling (or buying) it back and settling the day after.

In finance, a futures contract (more colloquially, futures) is a standardized contract between two parties to buy or sell a specified asset of standardized quantity and quality for a price agreed upon today (the futures price or strike price) with delivery and payment occurring at a specified future delivery date. In many cases, the underlying asset to a futures contract may not be traditional commodities at all – that is, for financial futures the underlying item can be any financial instrument (including currency, bonds, and stocks). The party agreeing to buy the underlying asset in the future, the buyer of the contract, is said to be long, and the party agreeing to sell the asset in the future, the seller of the contract, is said to be short. The same mechanism functioning in forward contracts applies to futures.

Forward contracts are very similar to futures contracts, except they are not exchange-traded, or defined on standardized assets. Forwards also typically have no interim partial settlements or “true-ups” in margin requirements like futures – such that the parties do not exchange additional property securing the party at gain and the entire unrealized gain or loss builds up while the contract is open.