The Role of Risk in Capital Budgeting

Sensitivity analysis determines how much a change in an input will affect the output.

Describe how sensitivity analysis is used to make investment decisions

Capital budgeting is, by definition, forward looking. When dealing with expected resources and demands, uncertainty is a major factor. Sensitivity analysis is a statistical tool that determines how consequential deviations from the expected value occur. Sensitivity Analysis deals with finding out the amount by which we can change the input data for the output of our linear programming model to remain comparatively unchanged. This helps us in determining the sensitivity of the data we supply for the problem. It also helps to determine the optimal levels of each input.

Sensitivity analysis can be useful for a number of reasons, including:

In order to conduct a sensitivity analysis, all of the inputs and parameters are connected via an algorithm to produce the output. For example, a model of the inputs and parameters for a company interest in creating a new product may include information about expected availability of raw material, inflation rates, and number of employees working in R&D. The output would be the profit generated by the new product. The sensitivity analysis entails changing each variable and seeing how that changes the output. Generally, only one variable is changed at once, with all of the others fixed at their base value. This makes it easy to see how much a variable affects the output. However, not all of the inputs may be independent so changing inputs one at a time does not account for interaction between the inputs.

Sensitivity of a Variable: Sensitivity analysis determines how much an output is expected to change due to changes in a variable or parameter. In this case, the output (y-axis) decreases exponentially with an increase in the input (x-axis). This is mapped out for each input.

Scenario analysis is a process of analyzing decisions by considering alternative possible outcomes.

Scenario analysis is a strategic process of analyzing decisions by considering alternative possible outcomes (sometimes called “alternative worlds”). It is not a predictive mechanism, but rather an analytic tool to manage uncertainty today.. 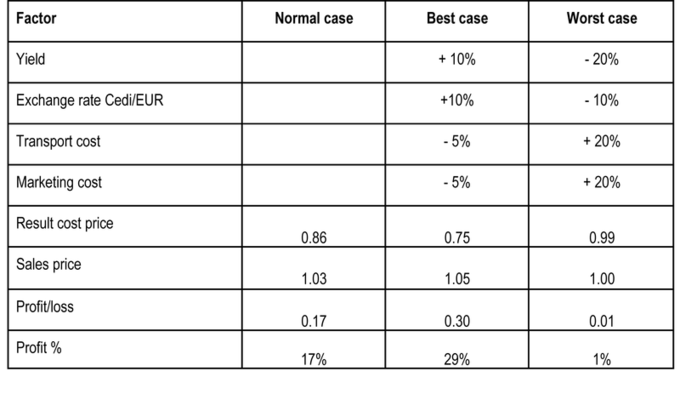 Scenario Analysis: This scenario analysis shows how changes in factors like yield and transport cost can affect profits.

For example, a firm might use scenario analysis to determine the net present value (NPV) of a potential investment under high and low inflation scenarios.

In another example, a bank might attempt to forecast several possible scenarios for the economy (e.g. rapid vs. moderate vs. slow growth) or it might try to forecast financial market returns (for bonds, stocks and cash) in each of those scenarios. Perhaps, it might also consider sub-sets of each of the possibilities. It might further seek to determine correlations and assign probabilities to the scenarios (and sub-sets if any). By analyzing these various scenarios, the bank will be in a better position to consider how best to allocate its assets.

Many scenario analyses use three different scenarios: base case, worst case and best case. The base case is the expected scenario: if all things proceed normally, this is what the expected outcome will be. The worst and best cases are obviously scenarios with less and more favorable conditions, but they are still confined by a sense of feasibility. For example, an investor creating the worst case scenario would not be well served to have it include a meteor strike that destroys the company. While clearly a bad scenario, it is not realistic enough to be helpful.

The purpose of scenario analysis is not to identify the exact conditions of each scenario; it just needs to approximate them to provide a plausible idea of what might happen.

Monte Carlo simulation uses statistical data to figure out the average outcome of a scenario based on multiple, complex factors. 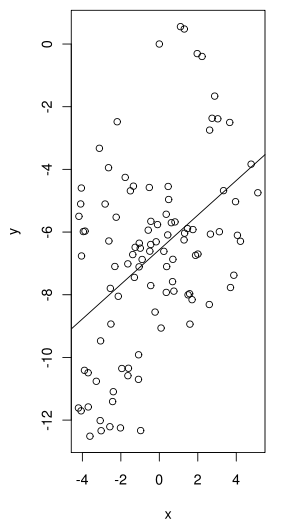 Monte Carlo Simulation: By running many simulations based on the probability or distribution of an input (x), the analyst can see the average output (y). This is done for multiple inputs at once to find out how they affect the output.

In order to account of complex, interconnected factors, all of which may affect financial outcomes, companies turn to statistical methods. The Monte Carlo method solves a problem by directly simulating the underlying process and then calculating the average result of the process. It simulates the various sources of uncertainty (eg. inflation, default risk, market changes, etc.) that affect the value of the instrument, portfolio, or investment in question, and calculates a representative value given these possible values of the underlying inputs. In essence, the Monte Carlo method is designed to find out what happens to the outcome on average when there are changes in the inputs.

Each potential factor is assigned a probability or statistical distribution. For example, the investor may estimate the probability of default on a bond as 20%. That means that 20% of the time, he will not earn back his principal. The investor may also estimate that the inflation rate is normally distributed around a mean of 3% and standard deviation of 0.5%.

The investor estimates the probability or distribution of every factor that could change the result of the investment. Then, he essentially uses the distributions to run many many simulations of all the inputs to see how they affect the output and then finds the average output.

For example, for bonds and bond options, under each possible evolution of interest rates the investor observes a different yield curve and a different resultant bond price. To determine the bond value, these bond prices are then averaged. To value the bond option, as for equity options, the corresponding exercise values are averaged and present valued. By determining the average, the investor can figure out what the expected value is.

The advantage of the Monte Carlo method is that it is able to handle multiple moving, and possible related, inputs. As the number of factors increases, it becomes harder to figure out the “base case. ” Statistical analysis through Monte Carlo simulations is great at handling problems with multiple, inter-related, and uncertain factors.

A decision tree is a decision support tool that uses a tree-like graph or model of decisions and their possible consequences.

Describe how to set up a decision tree

A decision tree is a decision support tool that uses a tree-like graph or model of decisions and their possible consequences, including chance event outcomes, resource costs, and utility. They help to identify the strategy that is most likely to reach the declared goal. For an investor, this may be used to help determine which bond to buy in order to get the highest expected return with only a certain amount of risk. Decision trees are set up much like an organizational flow chart.

Decision Tree: This decision tree highlights the outcomes of different investing strategies. Next to the terminal nodes is blue text with the yield and gain.

Unlike a flow chart, a decision tree consists of three types of nodes:

In order to set up and use a decision tree, the user must first list each decision point. For example, in, the investor first listed the number of investments that could be made (1, 2, or 3) and then the options for the likely payoffs (optimistic, most likely, etc.). Each end node was given a value. Working from left to right (or top to bottom), the investor determined that making one investment has the highest expected value ($641,500 vs. $0). Therefore, the investor will definitely choose to make one investment. Then, to determine the payoff, the probabilities and yields are listed. This is a chance node, so the investor doesn’t know how much he will earn from the investment, but does know his options.

Decision trees can become very complex, so determining the correct strategy becomes more difficult. Decision trees are always solved from the top to the bottom (or left to right) and is just a process of picking the most optimal path or seeing the likely payoffs.

There may not be an idea strategy shown on the decision tree. In that case, the decision tree is still useful as a way to map out all of the possible strategies with their costs and benefits.