Financial leverage is a tactic to multiply gains and losses, calculated by a debt-to-equity ratio.

Calculate financial leverage, and recognize the core relationship between risk and return

At its simplest, leverage is a tactic geared at multiplying gains and losses. Leveraging existing assets to get exponentially more return can be a risk intensive process, and represents a significant aspect of financial strategy and capital structure. Achieving leverage can enable significant competitive advantages despite the risk, however, as it can accelerate the speed of revenue acquisition exponentially.

The standard way to accomplish leverage is through borrowing, via debt and equity, to invest at a much higher scale than one’s current assets would allow. In order to borrow substantial amounts of capital, firms must pursue a variety of financial sourcing and be able to back up their debts with valuable assets ( collateral ). Even with a great deal of collateral, borrowing big means risking big. Interest rates ensure that the strategic discussions around expanding leverage take into account the risk and return trade offs.

In finance, the best definitions come in equation format. The standard definition of financial leverage is as follows:

In short, the ratio between debt and equity is a strong sign of leverage. As you may already know, equity is ownership of the organization and pays out fairly significant dividends. Debt is often lower cost access to capital, as debt is paid out before equity in the event of a bankruptcy (thus debt is intrinsically lower risk for the investor).

The debt to equity ratio plays a role in the working average cost of capital (WACC) as well, as the overall interest on financing represents the break-even point that must be obtained to achieve profitability in a given venture. WACC is essentially the overall average interest an organization owes on the capital it has borrowed for leverage.

A word of caution: Leverage is exponentially more risky the more it is utilized. A useful way to view leverage is the overall existing assets of an organization compared to the amount of money they owe. For example, say you own a company with an overall net worth of $1 million. If you were to be leveraged at a total of 1.5 times (i.e. financed at $1.5 million), this would put you at some risk. Arguably a reasonable amount.

Before Lehman Brothers went bankrupt, they were leveraged at over 30 times ($691 billion in financial leverage compared to $22 billion in assets). A mistake of this scale (on both the lenders and the Lehman Brothers) threatened to topple the global economy itself. It’s important to keep responsibility, accountability, and risk in mind when considering leverage options. 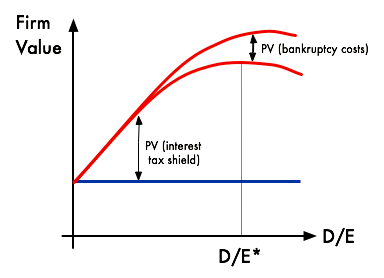 Financial Leverage Firm Value Implications: This graph illustrates a theoretical firm value maximizing curve when it comes to a debt-to-equity ratio. All this means is that each organization has the ideal balance between debt and equity, and finding the ‘sweet spot’ is a useful strategic aspect of financial leverage decisions.

The use of financial leverage can positively – or negatively – impact a company’s return on equity as a consequence of the increased level of risk.

Describe how leverage can impact a business

Taking on debt, as an individual or a company, will always bring about a heightened level of risk due to the fact that income must be used to pay back the debt even if earnings or cash flows go down. From a company’s perspective, the use of financial leverage can positively – or sometimes negatively – impact its return on equity as a consequence of the increased level of risk.

Impact on Return on Equity

Return on equity is the rate of return on the shareholders ‘ equity of a company’s common stock owners. It measures a firm’s efficiency at generating profits from every unit of shareholders’ equity. Return on equity shows how well a company uses investment funds to generate earnings growth. It can be calculated using the following equation:

Return On Equity: The equation used to calculate return on equity.

At an ideal level of financial leverage, a company’s return on equity increases because the use of leverage increases stock volatility, increasing its level of risk which in turn increases returns. However, if a company is financially over-leveraged a decrease in return on equity could occur. Financial over-leveraging means incurring a huge debt by borrowing funds at a lower rate of interest and using the excess funds in high risk investments. If the risk of the investment outweighs the expected return, the value of a company’s equity could decrease as stockholders believe it to be too risky.

The most obvious risk of leverage is that it multiplies losses. Due to financial leverage’s effect on solvency, a company that borrows too much money might face bankruptcy during a business downturn, while a less-levered company may avoid bankruptcy due to higher liquidity. There is a popular prejudice against leverage rooted in the observation of people who borrow a lot of money for personal consumption – for example, heavy use of credit cards. However, in finance the general practice is to borrow money to buy an asset with a higher return than the interest on the debt. Instead of spending money it doesn’t have, a company actually creates value. On the other hand, when debt is taken on for personal use there is no value being created, i.e., no leveraging.

When evaluating the riskiness of leverage it is also important to factor in the value of the company itself and its activities. If a company borrows money to modernize, add to its product line, or expand internationally, the additional diversification will likely offset the additional risk from leverage. The upshot is, if value is expected to be added from the use of financial leverage, the added risk should not have a negative effect on a company or its investments.

To calculate total leverage, we multiply Degree of Operating Leverage by Degree of Financial Leverage.

Fully derived, we see that to multiply Degree of Operating Leverage and Degree of Financial Leverage, we subtract fixed costs and interest expense from the total contribution margin (revenue minus variable cost times the number of units sold), and divide total contribution margin by this result. Companies usually choose one form of leverage over the other when analyzing potential investments. One that utilizes both forms of leverage undertakes a very high level of risk.