Operating leverage is a measure of how revenue growth translates into growth in operating income.

Identify ways to increase or decrease a company’s operating leverage

Break-even analysis tells a company how much it needs to sell in order to pay for an investment.

Break-even analysis tells a company how much it needs to sell in order to pay for an investment — or at what point expenses and revenue are equal.

To find the amount of units required to be sold in order to break even, we simply divide the total fixed costs by the unit contribution margin.

Unit contribution margin can be thought of as the fraction of sales, or amount of each unit sold, that contributes to the offset of fixed costs. It is simply the unit net revenue minus the unit variable cost. When sales have exceeded the break-even point, a larger contribution margin will mean greater increases in profits for a company. By inserting different prices into the break-even formula, you will obtain a number of break-even points– one for each possible price charged. 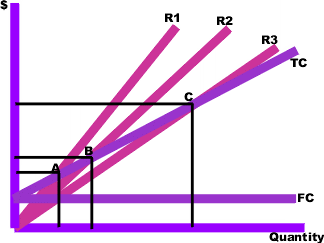 Break-even analysis helps to provide a dynamic view of the relationships between sales, costs and profits. By providing a better understanding of the amount of success an investment or project must attain, break-even analysis gives companies a benchmark to compare to and an idea about what level of operating leverage will be ideal to generate greater profits.

The relationship between fixed and variable costs, when calculated alongside sales volume, enables modeling of operational leverage.

Before learning each calculation, it’s useful to frame the issue of leverage first. Operating leverage is largely predicated on fixed costs. When fixed costs are high (and variable costs are low), there is quite a bit of risk if the volume of production is low. However, strong increases in revenues will eventually result in substantially higher increase in profitability (as the relative impact of variable costs is lower, and the fixed cost is being divided by higher quantity). The equations below will demonstrate this concept in practice and clarify the concept. What’s important to keep in mind is the importance of fixed costs compared to variable costs, and the impact this can have on financial leverage.

Most of the calculations and models for leverage are relatively intuitive when looking at examples.

Let’s say you own a business selling coffee. Each cup of coffee you sell costs you about $0.10. You’re want to beat out the competition on price, so you sell your coffees pretty low at $1.00/coffee. As you can see, your variable cost is only 10% of the overall revenue. The rest of those costs (plus the profit left over) fall into the fixed costs category. After being in business for one year, you have spent a total of $100,000 acquiring the fixed assets you need (a small location, coffee machines, grinders, chairs, tables, and other random necessities).

If you sell one cup of coffee, you’ve spent $100,000.10 and made $1.00. Not so profitable at this point, as you can see. Your fixed costs compared to your total costs is pretty much 100%. To find our where you’ll break even, simply subtract the variable cost from the sale price and divide that by the fixed costs (i.e. how many $0.90 profits are required to cover the full $100,000 you owe in fixed costs). Around your 111,111 cup of coffee, you’ll find yourself just about even. After this point, pretty much every cup of coffee you sell if 90% profit and 10% cost. Not bad, right? But it’ll take a lot of leverage to get there, and therefore there is always the risk you’ll go out of business before you make it to your 111,111th cup of coffee.

So, the model for leverage in this case is fixed costs/total costs (or fixed costs/fixed costs + variable costs):

The Degree of Operating Leverage 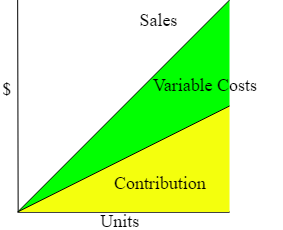 Variable Costs and Contribution: After filtering out the fixed costs, increases in volume will increase both the overall variable expense and the overall contribution.

It is also useful to frame this as the operating margin, which compares the overall revenue to the overall operating income. This is more of a snapshot of the current situation, while the DOL above is more in tune with relative changes over time.

At the core of degree of operating leverage is the same concept discussed in the example above. The overall amount gained per new unit sold changes based on the ratio between fixed and variable costs, and this change is what is being modeled what talking about leverage.

Benefits and Risks of Operating Leverage

The use of operating leverage can multiply profits when a given break-even point is reached, but it can intensify losses when it is not.

Leverage, in general, can defined as any technique that is used to multiply gains and losses. By this definition the use of leverage creates risk, and thus will always necessitate a tradeoff between risk and return. As in any situation of this sort, added risk can produce benefits for a firm, but it can also lead to detrimental consequences.

Problems can arise if a company has very high fixed costs, and if a company has difficulty selling enough units to break even on a particular investment. This is referred to as “business risk,” since it arises from the inherent risk of doing business. In other words, the uncertainty of generating a necessary amount of sales is a dilemma all businesses face. Just as the use of operating leverage can lead to greater profits, if a company is able to reach a given, break-even point, so too can the use of leverage drastically multiply losses if that point is not reached. 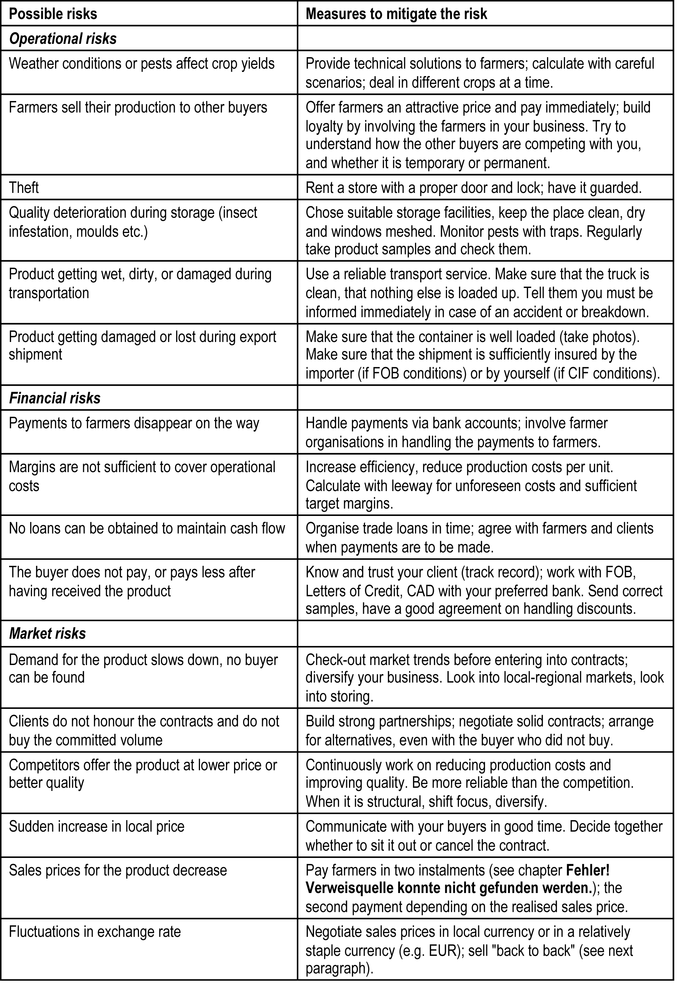 Possible Business Risks: This chart represents a list of the possible risks involved in running an organic business. Risks such as these affect sales, which in turn affect the amount of operating leverage a company should utilize.