The Michigan behavioral studies are an important link in the ongoing development of behavioral theory in a leadership framework.

The recognition of leaders and the development of leadership theory have evolved over centuries. Individual ideas, actions, and behaviors have been identified as indicating leadership within societal structures. This theoretical evolution has progressed over time, from identifying individual personalities or characteristics to formal studies related to what constitutes leadership and why leadership is or is not successful. Some of these studies and observations have been informal, while others have included empirical research and data. 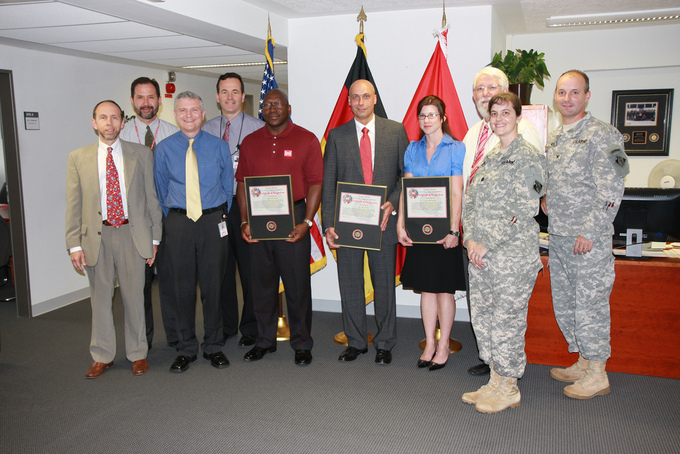 A group of leaders receiving recognition for their service: These people are all leaders.

A Brief History of Leadership Research

Rost (1991) writes that in the 20th century, over 200 definitions for leadership were proposed. Leadership research continues as scholars observe, identify, and promote the emergence of new leadership styles and behaviors in the 21st century. A multitude of approaches have been used to identify and explain the complex factors that shape leadership and how it is practiced. These approaches include quantitative methods such as surveys, questionnaires, and diagnostic tests, as well as qualitative observational and ethnographic studies. These theories evaluate the relationship of the leader to organizational members and examine styles of leadership, adding to the general knowledge of leader behavior and effectiveness.

Michigan Leadership Studies in the 1950s and 1960s

As a leading center of social science research, the University of Michigan has produced some of the most important studies of leadership. Studies dating back to the 1950s identified two broad leadership styles: an employee orientation and a production orientation. The studies also identified three critical characteristics of effective leaders: task-oriented behavior, relationship-oriented behavior, and participative leadership. The studies concluded that an employee orientation rather than a production orientation, coupled with general instead of close supervision, led to better results. The Michigan leadership studies, along with the Ohio State University studies that took place in the 1940s, are two of the best-known behavioral leadership studies and continue to be cited to this day.

The Ohio State University Leadership Study focused on identifying behaviors (as opposed to traits) that were indicative of a strong leader.

Leadership is a field of study (and core ability) that focuses on the ability of an individual or group to “lead” or guide other teams, people, or even entire organizations. The evolution of the field of leadership is quite extensive, ranging from the following perspectives:

Each of these schools of thought are facets of what modern leadership theories try to take into account today, as varying perspectives on leadership are useful to take into consideration the complex, global world of organizations. 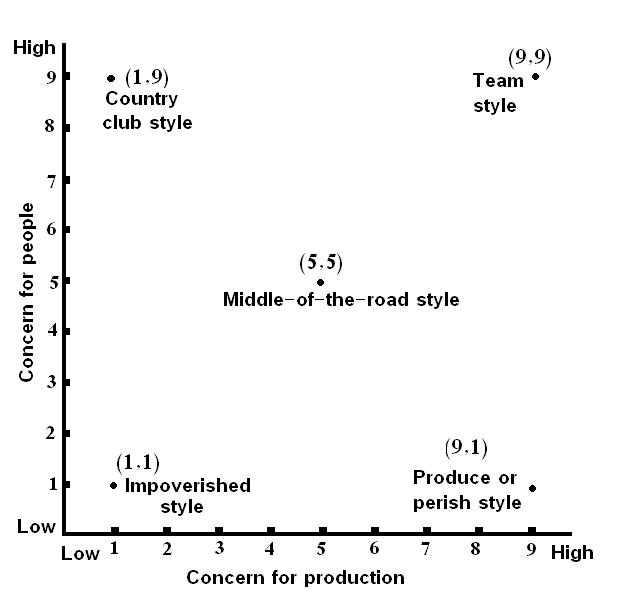 Leadership Grid: One perspective on leadership is balancing the well-being of the people who work for you with the efficiency of task completion, as illustrated in this simple chart. The Ohio State Leadership Studies touched upon this concept.

Early methods of research theory centered around trait theories. The basic premise was that certain characteristics of individuals were the ideal indicator of success in a leadership role. In other words, for example, extroverted individuals with a highly developed sense of empathy, confidence, and decisiveness would make good leaders. As you may already be thinking, this perspective on leadership is somewhat limiting, as there are various external factors and situational considerations one should consider when determining if a given individual is a strong fit for leading a specific initiative or organization.

While the concept of identifying good leaders based upon individual characteristics had some merit (which has been identified in later research), the Ohio State Leadership study was more interested in which specific behaviors effective leaders executed (compared to ineffective leaders). This consideration and initiating structure of behavior yielded a number of interesting results.

A survey with 150 statements (narrowed down from nearly 2000 potential statements), which was titled the Leadership Behavior Description Questionnaire, was delivered to leaders to identify what types of behaviors were most effective in leading. Nine specific behaviors were identified and measured.

The results of this questionnaire identified two different groupings of four behaviors within the subtopics of consideration and initiating structure.

Consideration is the extent to which a leader exhibits concern for the welfare of the members of the group.

With a focus on interpersonal relationships, mutual trust and friendship, the consideration leadership style is people-oriented. This focuses primarily on:

The second behavioral element the study identified revolves around roles, objectives, activities, planning, and delegation. Unlike the people-oriented style above, this is a task-oriented perspective that focuses on behaviors such as: