The Fiedler model shows that effective leadership depends on how a leader’s traits and the surrounding context interact.

Assess the value and efficacy of Fred Fiedler’s leadership model

Fred Fiedler’s model of leadership states that different types of leaders are required for different situations. This situational contingency understanding of leaderships suggests, for instance, that a leader in a strict, task-oriented workplace would have different qualities than a leader in a more open, idea-driven workplace. Fiedler subsequently enhanced his original model to increase the number of leadership traits it analyzed. This later theory, known as Cognitive Resource Theory (CRT), identifies the conditions under which leaders and group members will use their intellectual resources, skills, and knowledge effectively.

The Fiedler situational contingency model measures leadership traits with a test that provides a leadership score corresponding to the workplace where the leader would be most suited. The Least Preferred Co-worker (LPC) test asks test takers to think of someone they least prefer working with and rate that person from one to eight on a scale of various traits. For example, the taker is asked to rate the co-worker from Unfriendly (1) to Friendly (8), or Guarded (1) to Open (8). The ratings are then averaged. Generally, a higher LPC score means the person being rated is more oriented to human relations, while a lower score means the person is more oriented to tasks.

The LPC test is not actually about the co-worker; it is a profile of the test taker. Test subjects who are more oriented to human relations generally rate their least preferred co-workers higher, and the opposite is true for task-oriented test takers. The LPC test reveals how respondents react to those that with whom they do not like working, and thereby reveals leadership contexts best suited to the test takers’ personality. 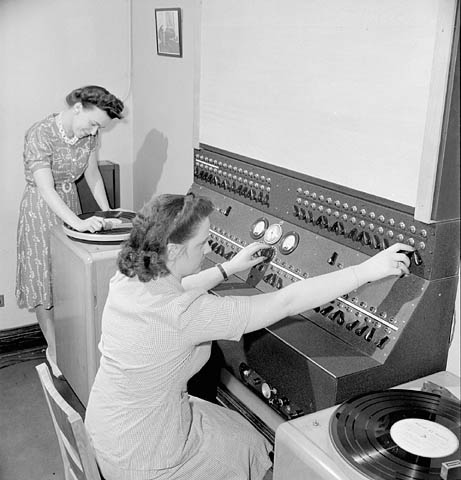 The Fiedler model also analyzes the situation in which the leader functions. The situation analysis has three components:

When good leader-member relations, a highly structured task, and high leader-position power are in place, the situation is considered a “favorable situation.” Fiedler found that low-LPC leaders are more effective in extremely favorable or unfavorable situations, whereas high-LPC leaders perform best in situations with intermediate favorability. Leaders in high positions of power have the ability to distribute resources among their members, meaning they can reward and punish their followers. Leaders with low position power cannot control resources to the same extent as leaders with high position power, and so lack the same degree of situational control. For example, the CEO of a business has high position power, because she is able to increase and reduce the salary that her employees receive. On the other hand, an office worker in this same business has low position power, because although he may be the leader on a new business deal, he cannot control the situation by rewarding or disciplining colleagues with salary changes.

Criticism of the Fielder Model

Fiedler’s contingency theory has drawn criticism because it implies that the only option for a mismatch of leader orientation and unfavorable situation is to change the leader. Some have disputed the model’s validity by questioning how accurately it reflects a leader’s personality traits. Also, the contingency model does not take into account the percentage of situations that might be somewhat favorable, completely unfavorable, or even extremely favorable. For this reason, critics of the model suggest that it does not provide a complete comparison between low-LPC leaders and high-LPC leaders.

Leadership and Followers: Hersey and Blanchard

Hersey and Blanchard’s model defines effective leadership based on leadership style and maturity of follower(s).

The other fundamental concept in the Hersey and Blanchard model is maturity of the group. Group maturity describes how confident group members are in the group’s ability to complete its tasks. This concept, too, is broken into four categories:

Maturity levels: In Hersey and Blanchard’s model, group maturity is divided into four distinct categories based on how able and willing the group is to complete the job.

Because maturity level varies based on the group and the task (for example, professional football players are an M4 group on the football field, but an M1 group if asked to play baseball), the leadership style must adapt based on the situation.

Effective leadership varies not only with the person or group that is being influenced but also depending on the task, job, or function that needs to be accomplished. The Hersey and Blanchard model encourages leaders to be flexible and find the right style for the task and the group maturity level. The most successful leaders are those who adapt their leadership style to the maturity of the group they are attempting to lead or influence and to that group’s purpose.

The Path-Goal theory argues that a leader’s role is to help followers achieve both personal and organizational goals.

In 1971, Robert House introduced his version of a contingent theory of leadership known as the Path-Goal theory. According to House’s theory, leaders’ behavior is contingent upon the satisfaction, motivation, and performance of their subordinates. House argued that the goal of the leader is to help followers identify their personal goals as well understand the organization ‘s goals and find the path that will best help them achieve both. Because individual motivations and goals differ, leaders must modify their approach to fit the situation.

The Path-Goal model emphasizes the importance of the leader’s ability to interpret follower’s needs accurately and to respond flexibly to the requirements of a situation.

In 1994, House published Organizational Behavior: The State of the Science with Philip Podsakoff. House and Podsakoff attempted to summarize the behaviors and approaches of “outstanding leaders” that they obtained from some more modern theories and research findings. Using the Path-Goal model as a framework, their Outstanding Leadership Theory (OLT) expanded the list of leadership behaviors required to channel follower’s motivations and goals more effectively toward the leader’s vision:

The Vroom-Yetton-Jago model is a leadership theory of how to make group decisions.

The Vroom-Yetton-Jago model defines five different decision approaches that a leader can use. In order of participation from least to most, these are:

The Vroom-Yetton-Jago model also provides guidance for leaders trying to determine which approach to decision making to use (AI through GII). The model uses a decision-tree technique to diagnose aspects of the situation methodically. This technique involves answering a series of yes or no questions and following the yes path to the recommended type of decision-making approach. 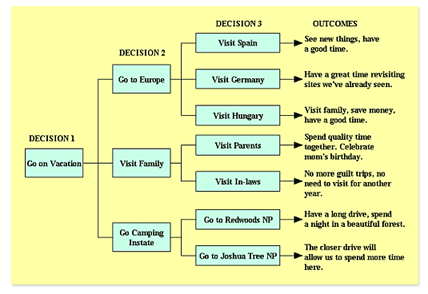 Decision tree: This is an example of a decision tree. One decition (go on vacation) leads to further decisions (whether to go to Europe, visit family, or go camping), all of which lead to another tier of decisions. The Vroom-Yetton-Jago model utilizes decision trees to determine the best leadership style for a given situation.

By answering the questions honestly, the decision tree provides the leader with the preferred decision style for the given situation.