Organizational culture can be defined as the collective behavior of people within an organization and the meanings behind their actions.

Culture is inherently intangible, and a static definition of culture struggles to encapsulate the meaning and implications of its role in an organization. One way to define culture is simply as the overarching mentality and expectation of behavior within the context of a given group (e.g., an organization, business, country, etc.). Culture provides a guiding perspective on how individuals within that group should act, and what meaning can be derived from those actions. Expectation, traditions, value, ethics, vision, and mission can all both communicate and reinforce a given group culture. Above all else, culture must be shared internally; otherwise it loses its form.

Corporate culture is usually derived from the top down (i.e., upper management sets the tone) and comes in the form of expectation and consistency throughout the organization. All employees and managers must uphold these cultural expectations to generate a working environment that correlates to cultural expectations. The shared assumptions should be implicit in behavior and explicit in the mission, vision and ethics statements of the organization. Consistency between expectation and action is key here.

People working at Wikimedia: Even small things, such as the way an office space is set up, can set the tone for organizational culture.

Culture can be manipulated and altered, depending on leadership and members. Let’s take the simple example of a car dealership. Selling cars is usually a commission business, where the salesperson is a central success factor. Many car dealerships find that competition is an effective cultural component and embed that into the organization. This is easily accomplished with the right tools. A car dealership owner may hire specifically for competitiveness, making it clear that this is the type of individual they want to hire. The owner can create high variable salary and low fixed salary so that high performers are much more highly prized and rewarded than ineffective salespeople. The owner could give out awards at the end of each quarter to the most successful salesperson. The list could go on and on, but the important consideration here is how strategy and culture can be intertwined to evolve together.

Culture is a deeply important element of organizations and societies that is studied extensively in a variety of disciplines. This has generated more definitions of culture and how to go about empirically measuring it than could be touched upon in one overview. However, a few important perspectives for a business manager include:

While each of these theories is complex, all together they help create a clearer picture of what exactly culture is and how it applies to managers and organizations.

The Impact of Culture on an Organization

Culture is a malleable component of an organization that can adapt and evolve through influences to create value.

Culture, particularly in large organizations that have a great deal of internal momentum, can be difficult to influence or change. The size of an organization and the strength of its culture are the biggest contributors to cultural inertia. Big and strong organizational cultures will have a powerful tendency to continue moving in the direction they are already moving (momentum). Therefore, managers must understand not only how to create culture, but also how to change it when necessary to ensure a positive, efficient and ethical culture.

While these are only a few of the elements of culture, they capture a wide variety of components that managers can use to influence and change the general cultural predisposition.

Cummings and Worley identify a useful way to frame the stages or steps in integrating broad organizational change through cultural reform in six stages, which correlates well with the factors identified above. These stages include:

Joint ventures and mergers and acquisitions usually require large cultural changes. When different cultures come together it is wise to expect some degree of culture-clash and differences of opinion. Managers, particularly upper management, must be aware of the implications of cultural change, the facets of organizational culture and the steps involved in altering it. While this model describes a long process that is generally more applicable to large cultural overhauls, the general strategy is useful for managers leading meaningful cultural change at all levels.

While there is no single “type” of organizational culture, some common models provide a useful framework for managers.

While there are several types of cultural and organizational theory models, Hofstede’s cultural dimensions theory is one of the most cited and referenced. Hofstede looked for global differences in culture across 100,000 IBM employees in 50 countries in an effort to determine the defining characteristics of global cultures in the workplace. With the rise of globalization, this is particularly relevant to organizational culture.

Through this process, he underlined observations that relate to six different cultural dimensions (originally there were five, but they have been updated in response to further research):

Edgar Schein’s model underlines three types of culture within an organization, which, as a simpler model than Hofstede’s, is somewhat more generalized. Schein focuses on artifacts, values, and assumptions: 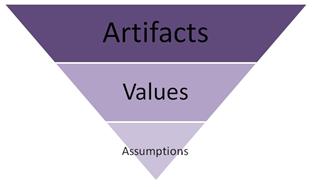 Charles Handy put forward a framework of four different types of culture that remains relevant today. His four types include:

While there are many other ways to divide and define culture, these three offer a good window into the literature surrounding cultural types.

Core culture is the underlying value that defines organizational identity through observable culture.

Identify the general definition and characteristics of a healthy core culture, alongside how this translates into observable culture.

One useful theoretical framework to consider when differentiating between core and observable culture is Edgar Schein’s Organizational Culture Model. This mode simply and efficiently illustrates the cultural facets of a given organization as an upside-down triangle.

The broader base at the top of the inverted pyramid represents artifacts, the simplest and most physical (i.e., observable) elements of a given culture. This includes the way desks are situated in an office (collaborative or individualistic?), the colors and shapes used in the logo, the general dress code, etc.

The next level is values, which bridges the gap between observable and core culture. Values are explicitly and observably stated in organizational literature (i.e., the employee handbook and mission statement), but also implicitly executed in individual behaviors. While it is observable when the CEO makes a public statement for shareholders or when the promotional team writes a press release, it is also derived directly from discussions of what the core culture is. This is where observable culture begins to transform into core culture.

The final component identified by Schein is parallel with the concept of core culture: assumptions. The assumptions made by the individuals within an organization are so intimately tied to the core organizational culture that they are virtually unrecognizable. In many ways, one could equate core culture with an individual’s subconscious. While our subconscious so often drives our conscious behavior, we rarely realize it. Core culture has the same relationship with observable culture: core culture is created first, and ultimately drives the visible cultural aspects of the organization.

Organizational culture, both observable and core, is created first at the managerial level. Leaders must define not only what it is they are working towards, but also how the organization will come to define itself during the process. The core culture created by leadership sets the tone for employee behavior and assumptions in the future.

Upper management must decide which values and ethos will constitute the core of the organizational culture, and then instill this internally, in their employees, and communicate it externally, to stakeholders (via observable culture). Management is tasked with both the creation and consistent application of core culture at the organizational level.