A team is a group of people who collaborate on related tasks toward a common goal.

Define teams, particularly as they pertain to the business environment or organizational workplace

A team is a group of people who work together toward a common goal. Teams have defined membership (which can be either large or small) and a set of activities to take part in. People on a team collaborate on sets of related tasks that are required to achieve an objective. Each member is responsible for contributing to the team, but the group as a whole is responsible for the team’s success.

The meaning of TEAM: A team is a group of people who work together toward a common goal.

Teams in the Workplace

Sports teams are a good example of how teams work. For instance, a basketball team has individual players who each contribute toward the goal of winning a game. Similarly, in business settings most work is accomplished by teams of individuals who collaborate on activities with defined outcomes. Because teams are so prevalent in business organizations, it is important for employees to have the skills necessary to work effectively with others.

Organizations typically have many teams, and an individual is frequently a member of more than one team. Some teams are permanent and are responsible for ongoing activities. For instance, a team of nurses in a maternity ward provides medical services to new mothers. While patients come and go, the tasks involved in providing care remain stable. In other cases a team is formed for a temporary purpose: these are called project teams and have a defined beginning and end point linked to achieving a particular one-time goal.

The Purpose of Teams

Organizations form teams to accomplish tasks that are too large or complex for an individual to complete. Teams are also effective for work that requires different types of skills and expertise. For example, the development of new products involves understanding customer needs as well as how to design and build a product that will meet these needs. Accordingly, a new product-development team would include people with customer knowledge as well as designers and engineers.

Teamwork involves a set of interdependent activities performed by individuals who collaborate toward a common goal.

Identify the processes and activities by which team work gets done

Teamwork involves a set of tasks and activities performed by individuals who collaborate with each other to achieve a common objective. That objective can be creating a product, delivering a service, writing a report, or making a decision. Teamwork differs from individual work in that it involves shared responsibility for a final outcome. 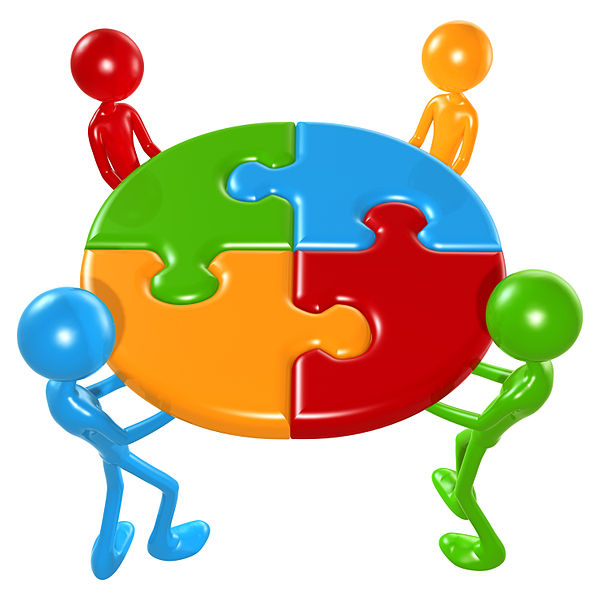 Teamwork: Human skill involves the ability to work effectively as a member of a group and to build cooperative effort in a team.

While the substance of the tasks involved in teamwork may vary from team to team, there are three processes that are common to how teamwork gets done: the transition process, action processes, and interpersonal processes. During each of these processes, specific sets of activities occur.

1. The transition process is the phase during which a team is formed. Activities include:

2. Action processes comprise the phase during which a team performs its work. Activities include:

3. Interpersonal processes include activities that occur during both the transition and action processes. These include:

An effective team accomplishes its goals in a way that meets the standards set by those who evaluate its performance. For instance, a team may have a goal of delivering a new product within six months on a budget of $100,000. Even if the team finishes the project on time, it can be considered effective only if it stayed within its expected budget.

Effective teamwork requires certain conditions to be in place that will increase the likelihood that each member’s contributions—and the effort of the group as a whole—will lead to success. Effective teams share five characteristics:

Effective teamwork requires that people work as a cohesive unit. These five characteristics can help individuals collaborate with others by focusing their efforts in a common direction and achieving an outcome that can only be reached by working together.

The Role of Teams in Organizations

By combining various employees into strategic groups, a team-based organization can create synergies through team processes.

Recognize the role of a team in an organization, and illustrate the team process.

The Role of Teams

The primary role of a team is to combine resources, competencies, skills, and bandwidth to achieve organizational objectives. The underlying assumption of a well-functioning team is one of synergy, which is to say that the output of a team will be greater than the sum of each individual’s contribution without a team architecture in place. As a result, teams are usually highly focused groups of employees, with the role of achieving specific tasks to support organizational success.

Some organizations have a need for strong cross-functional teams that enable various functional competencies to align on shared objectives. This is particularly common at technology companies, where a number of specific disciplines are combined to produce complex products and/or services.

When considering the role of a team, it’s important to understand the various processes that teams will carry out over time. At the beginning of a team set up (or when redirecting the efforts of a team), a transitional process is carried out. Once the team has set strategic goals, they can begin progressing towards the completion of those goals operationally. The final team process is one of interpersonal efficiency, or refining the team dynamic for efficiency and success.

More specifically, these processes can be described as follows: 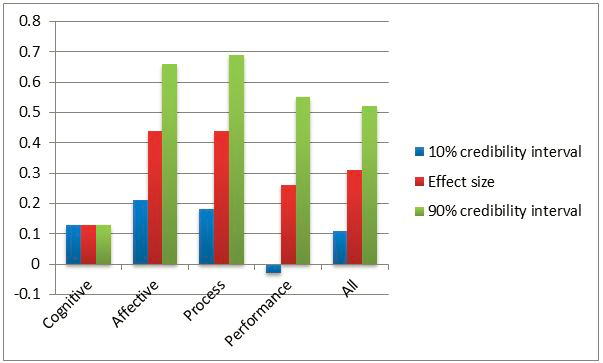 The Impact of Team Building: This chart allows you to visualize data from a study on team-building, and its impact on team performance. Building a strong organizational culture for successful teams requires commitment to team processes.

Depending on its needs and goals, a company can use a project team, a virtual team, or a cross-functional team.

Recognize the differences between types of teams and their uses

Depending on its needs and goals, a company may use different types of teams. Some efforts are limited in duration and have a well-defined outcome. Other work requires the participation of people from different locations. Still other projects depend on people with a broad and diverse range of knowledge and expertise.

Teams may be permanent or temporary, and team members may come from the same department or different ones. Common types of teams found in organizations include project teams, virtual teams, and cross-functional teams.

It is common for an organization to have many teams, including teams of several types. Effective teamwork depends on choosing the type of team best suited to the work that needs to be accomplished.

The benefits of teamwork include increased efficiency, the ability to focus different minds on the same problem, and mutual support.

The primary benefit of teamwork is that it allows an organization to achieve something that an individual working alone cannot. This advantage arises from several factors, each of which accounts for a different aspect of the overall benefit of teams.

Teamwork creates outcomes that make better use of resources and produce richer ideas.

The total value created by teamwork depends on the overall effectiveness of the team effort. While we might consider simply achieving a goal a benefit of teamwork, by taking advantage of what teamwork has to offer, an organization can gain a broader set of benefits.

Teams face challenges to effective collaboration and achieving their goals.

Identify the common pitfalls teams can encounter that limit their performance

The collaborative nature of teams means they are subject to pitfalls that individuals working alone do not face. Team members may not always work well together, and focusing the efforts of individuals on shared goals presents challenges to completing tasks as efficiently and effectively as possible. The following pitfalls can lead to team dysfunction and failure to achieve important organizational objectives.

Since team members share responsibility for outcomes, some individuals may need to do additional work to make up for those not contributing their share of effort. This can breed resentment and foster other negative feelings that can make the team less effective. One cause of this is the failure of the team to establish clear norms of accountability for individual contributions to the group effort.

Sometimes an individual or small number of team members can come to dominate the rest of the group. This could be due to strong personalities, greater abilities, or differences in status among members. When individuals either do not feel listened to or believe their ideas are not welcome, they may reduce their efforts.

Effective collaboration requires team members to have confidence that everyone shares a set of goals. When that belief is missing, some individuals may not feel comfortable sharing their ideas with the group. Lack of trust can also lead to miscommunication and misunderstandings, which can undermine the group’s efforts.

While conflicts are a common aspect of working together and can even be beneficial to a team, they can also negatively affect team performance. For instance, conflict can delay progress on tasks or create other inefficiencies in getting work done.

When team members do not have the collaboration skills needed to work well with others, the overall ability of the team to function can be limited. As a result, conflicts may be more likely to arise and more difficult to resolve.

A team that does not have the expertise and knowledge needed to complete all its tasks and activities will have trouble achieving its goals. Poor team composition can lead to delays, higher costs, and increased risk.

Sometimes the group cannot move from defining goals and outlining tasks to executing its work plan. This may be due to poor specification of roles, tasks, and priorities.

The size of the team can sometimes affect its ability to function effectively. Coordination and communication are more complex in a larger team than in a smaller one. This complexity can mean that decisions must take into account greater amounts of information, meetings are more challenging to schedule, and tasks can take longer to complete.

Outcomes can suffer if team members value conflict avoidance and consensus over making the best decisions. People can feel uncomfortable challenging the group’s direction or otherwise speaking up for fear of breaking a team norm. This phenomenon is known as “groupthink.” Groupthink can limit creativity, lead to poor choices, or result in mistakes that might otherwise have been avoidable.

While teams offer many benefits, their effectiveness rests on how well members can avoid common pitfalls or minimize their negative consequences when they occur.

All teams are groups of individuals, but not all groups are teams.

Differentiate between a group and a team

While all teams are groups of individuals, not all groups are teams. Team members work together toward a common goal and share responsibility for the team’s success. A group is comprised of two or more individuals that share common interests or characteristics, and its members identify with each other due to similar traits. Groups can range greatly in size and scope. For example, members of the millennial generation are a group, but so is a small book club formed by neighbors who enjoy reading.

Sometimes it is difficult to draw a distinction between a team and a group. For instance, a set of coworkers might meet on occasion to discuss an issue or provide input on a decision. While such meetings typically have an agenda and thus a purpose and some structure, we would not necessarily think of those in attendance as a team. The activity scope and duration is just too small to involve the amount of coordination of resources and effort that teamwork requires.