Historical Developments in the Global Economy

The development of a global economy includes important highlights to understand when considering its current framework.

Outline the trajectory of the development of the current global economy, specifically in the context of major historic developments

The history of globalization is a fascinating study from a wide variety of disciplines and perspectives, specifically economics, politics, sociology and ethics. As the simple concept of bartering grew into industrial production and cross-cultural trade, the capacity to specialize and collaborate generated substantial value across the globe. This process of international trade growth and the rise of a worldwide capitalistic structure is widely referred to as globalization, defining one of the most substantially influential concepts of the modern world. The development of this global economy has included a number of crucial highlights important to understand when considering the current framework of the global economy.

The theory of globalization necessitates geographic regions merging and melding together to form more efficient systems of industry and capitalistic growth. As a result of this concept, varying regions of close proximity and high historic interdependence have created groupings and trade agreements allowing for the continued development of a cross-cultural economy. This can loosely be viewed through analyzing the unification of Europe (EU), the emergence of BRIC as a strategic economic grouping, and the rapid growth of North America (specifically the United States). It is also worth making note of the environmental challenges this rapid capitalistic explosion presents the world.

One particularly relevant success story was the United States economy in the 20th century, which as a result of large technological increases provided enormous opportunities for GDP growth. As a result, the United States per capita GDP levels in 2010 were equivalent to nearly 500% of those in 1929. In many ways, this international competitive advantage in industry led the US to become the largest worldwide economy. 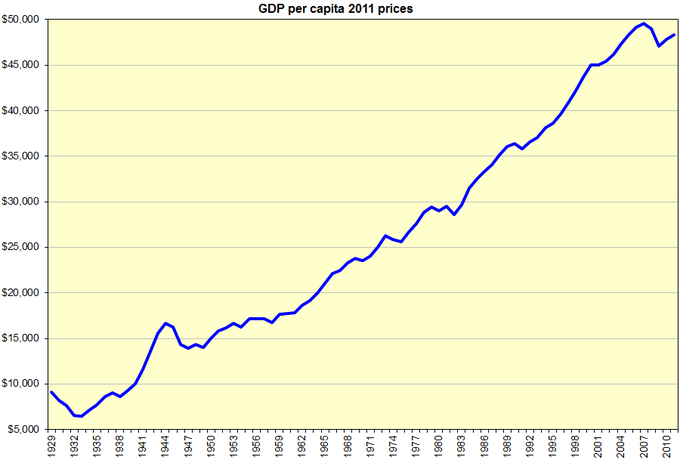 The consolidation of the European Union during the 20th century was also a substantial element of globalization, unifying a total of 27 countries under one currency. The union of these 27 member states has provided strong evidence to the concept of international inter-dependency. After the banking disasters of 2008, waves of economic downturn spread across the EU. This adverse factor on GDP growth effected each individual country differently, pushing Greece, Spain, Italy, and a number of other countries to the brink of economic disaster. However, due to strong treaties and ties, a support system was in place to offset potential economic disasters through reallocation of resources and bailouts. On a related note, the EU received a Nobel Peace Prize in 2012 for having contributed substantially to the advancement of peace, democracy and human rights across Europe. Synergy in a globalized economy is well supported by those EU initiatives.

The BRIC countries, meanwhile include Brazil, Russia, India, and China. This particular group is of immense importance due to its production power and size.. Generally speaking, the economic potential of the BRIC countries may very well see them as four of the top five economies come 2050. These emerging markets are growing at substantial rates due to the vast international trade potential now available in the globalized economy.

Top 5 Economies by 2050: This highlights the importance of the BRIC group of countries. Projections for the economic growth of those four states outstrip other countries by tens of thousands of dollars.

Despite the BRIC, US and EU success stories, there are also a number of reasonable and well-defended criticisms of a globalized world (see Boundless’s Globalization atoms for additional data). Chief among them are cultural dilution, environmental damage, human rights and political implications. Environmental concerns in particular have grown in volume as climate change continues to demonstrate strong empirical data of being a reality. The mass transportation system supporting a massive global market is a large contributor to emissions, and the energy usage rates continue to rise as more and more countries develop economies highly dependent upon leveraging energy sources. 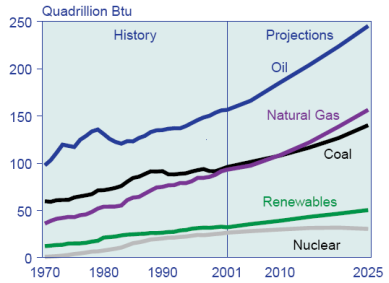 Energy Consumption Estimates (1970 – 2025): This chart shows the exponential growth in energy consumption that is caused by globalization.

Combining all of these facts, globalization has allowed for exponential growth in standard of living as a result of constant production to fill human needs. The US, EU and BRIC nations have been particularly poignant historic examples of this growth. Regardless of the advantages of a globalized world, environmental and ethical concerns need to be considered as the trajectory towards globality continues.