The Importance of Motivation

Motivating employees can lead to increased productivity and allow an organization to achieve higher levels of output.

Motivation in the Workplace

Generally speaking, motivation is what energizes, maintains, and controls behavior. As such, it is clear why it plays an important role in the workplace. But empirically measuring that role is another matter; it is challenging to capture an individual’s drive in quantitative metrics in order to ascertain the degree to which higher motivation is responsible for higher productivity. However, it is widely accepted that motivated employees generate higher value and lead to more substantial levels of achievement. The management of motivation is therefore a critical element of success in any business; with an increase in productivity, an organization can achieve higher levels of output.

Research has shown that motivated employees will:

In summary, motivated employees will retain a high level of innovation while producing higher-quality work more efficiently. There is no downside—i.e., the opportunity cost of motivating employees is essentially zero, assuming it does not require additional capital to coach managers to act as effective motivators.

Salary is often enough to keep employees working for an organization, but it’s not always necessarily enough to push them to fulfill their full potential. Herzberg’s theory emphasizes that while salary is enough to avoid dissatisfaction, it is not necessarily enough to propel employees to increase their productivity and achievement. In fact, the output of employees whose motivation comes solely from salary and benefits tends to decline over time. To increase employees’ efficiency and work quality, managers must turn to understanding and responding to individuals’ internal and external motivations. External motives include work environment (e.g., cramped cubicle vs. airy, open office); internal motivations include thoughts and emotions (e.g., boredom with performing the same task over and over vs. excitement at being given a wide variety of project types). 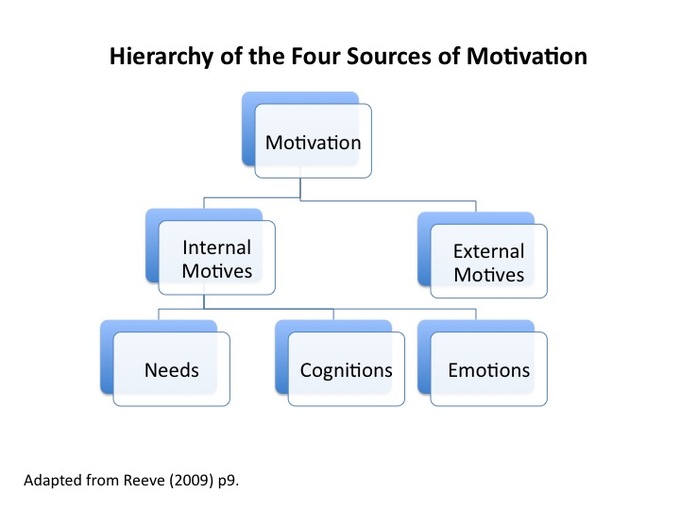 Motivation in the workplace is primarily concerned with improving employees’ focus through the use of incentives.

From a managerial perspective, very few ideas are more important than the dynamics of motivation. Understanding what moves employees toward efficiency and fulfillment is at the core of any manager’s responsibilities. Motivation in the workplace is primarily concerned with improving employees’ focus, often through pursuing positive incentives and avoiding negative ones.

Theories of motivation are of course rooted in psychology. An individual must direct their attention toward a task, generate the necessary effort to achieve that task, and persist in working toward it despite potential distractions. Various theories have attempted to identify the factors that contribute to effective employee motivation, most of which are easily divided into four broad categories:

At its most basic, motivation can be defined as the fulfillment of various human needs. These needs can encompass a range of human desires, from basic, tangible needs of survival to complex, emotional needs surrounding an individual’s psychological well-being.

The most well-known example of a needs-oriented theory of motivation is Maslow’s Hierarchy of Needs. Maslow postulated that needs should be fulfilled in a particular scaffolded order, with food, water, and shelter in the bottom, most fundamental two tiers and intangible needs such as fulfillment, self-esteem, and a sense of belonging in the upper three tiers. While this framework makes a certain amount of logical sense, critics have noted that there have been minimal data that suggest employees strive to satisfy needs in the workplace in accordance with this hierarchical framework. But the fundamental idea behind Maslow’s model is that individuals have various tangible and intangible desires that can be leveraged in the use of motivational incentives.

Atkinson and McClelland proposed the Need for Achievement Theory, which highlights three particular needs in the context of the workplace: achievement, authority, and affiliation. Atkinson and McClelland hypothesized that every individual has a need for all three of these intangible segments of fulfillment but that most individuals lean more toward one of the three. For example, a salesman with a quota to fulfill would be best paired with an achievement-oriented manager, as such a goal-oriented approach toward, for example, a specific number of sales would be highly motivating.

Equity Theory is based on the basic concept of exchange. It values the culmination of employee experience, skills, and performance against their respective compensation and advancement opportunities.

Essentially, Expectation Theory and Equity Theory demonstrate the value of rewarding an employee’s investment of time and effort with appropriate compensation.

The underlying concept of behavioral approaches to motivation is rooted in theories of “conditioning,” particularly the work of psychologist B.F. Skinner. Behaviorism stipulates that an employer should promote positive behavior and deter negative behavior, generally through a basic rewards system. Variable compensation, as found in many sales jobs, is a prime example of this concept. When an employee makes a sale, the employer provides a certain portion of income to the employee that executed that sale. This positive reinforcement serves as a behavior modifier, motivating the employee to repeat this behavior and make more sales.

Job-oriented theories adhere to the view that employees are motivated to complete tasks effectively because of an innate desire to be fulfilled or to contribute and that compensation and other forms of incentives are less important to them.

Frederick Herzberg’s Two-Factor Theory is the most well known of the job-oriented theories, despite the fact that it has not been supported by empirical evidence. Herzberg states that salary, benefits, status, and other tangible benefits for employees can only reduce dissatisfaction and that intangibles—such as autonomy, natural interest, recognition, and the responsibility of the work itself—are the true basis of motivation.

Other theories, such as Work Engagement Theory, similarly propose that intellectually fulfilling and emotionally immersive work is the foundation of a motivated workforce.

Clearly, our understanding of workplace motivation could benefit from further research and empirical analysis. But the variety of theories also highlights the fact that people can be motivated by different things in different circumstances. Effective organizational management requires an understanding of these theories as well as of their possible limitations.