Organisms vary in their ability to synthesize the 20 common amino acids, but most bacteria and plants can synthesize all 20.

Amino acids are the structural units that make up proteins. They join together to form short polymer chains called peptides or longer chains called either polypeptides or proteins. These polymers are linear and unbranched, with each amino acid within the chain attached to two neighboring amino acids. The process of making proteins is called translation and involves the step-by-step addition of amino acids to a growing protein chain by a ribozyme that is called a ribosome. The order in which the amino acids are added is read through the genetic code from an mRNA template, which is a RNA copy of one of the organism ‘s genes.

Twenty-two amino acids are naturally incorporated into polypeptides and are called proteinogenic or natural amino acids. Of these, 20 are encoded by the universal genetic code. The remaining two, selenocysteine and pyrrolysine, are incorporated into proteins by unique synthetic mechanisms. Selenocysteine is incorporated when the mRNA being translated includes a SECIS element, which causes the UGA codon to encode selenocysteine instead of a stop codon. Pyrrolysine is used by some methanogenic archaea in enzymes that they use to produce methane. It is coded with the codon UAG, which is normally a stop codon in other organisms. Pyrrolysine (abbreviated as Pyl or O) is a naturally occurring amino acid similar to lysine, but with an added pyrroline ring linked to the end of the lysine side chain. Produced by a specific tRNA and aminoacyl tRNA synthetase, it forms part of an unusual genetic code in these organisms. It is considered the 22nd proteinogenic amino acid. This UAG codon is followed by a PYLIS downstream sequence.

Structure of Pyrrolysine: Pyrrolysine (abbreviated as Pyl or O) is a naturally occurring, genetically coded amino acid used by some methanogenic archaea and one known bacterium in enzymes that are part of their methane-producing metabolism.

Organisms vary in their ability to synthesize the 20 common amino acids. Most bacteria and plants can synthesize all 20. Some simple parasites, such as the bacteria Mycoplasma pneumoniae, lack all amino acid synthesis and take their amino acids directly from their hosts. All amino acids are synthesized from intermediates in glycolysis, the citric acid cycle, or the pentose phosphate pathway. Nitrogen is provided by glutamate and glutamine. Amino acid synthesis depends on the formation of the appropriate alpha-keto acid, which is then transaminated to form an amino acid. Amino acids are made into proteins by being joined together in a chain by peptide bonds. Each different protein has a unique sequence of amino acid residues: this is its primary structure. Just as the letters of the alphabet can be combined to form an almost endless variety of words, amino acids can be linked in varying sequences to form a huge variety of proteins. Proteins are made from amino acids that have been activated by attachment to a transfer RNA molecule through an ester bond.

Unlike pyrimidines, purines are biologically synthesized as nucleotides and in particular as ribotides.

Distinguish between purine and pyrimidine synthesis

Purines are biologically synthesized as nucleotides and in particular as ribotides; i.e., bases attached to ribose 5-phosphate. A key regulatory step is the production of 5-phospho-α-D-ribosyl 1-pyrophosphate (PRPP) by PRPP synthetase, which is activated by inorganic phosphate and inactivated by purine ribonucleotides. It is not a committed step to purine synthesis because PRPP is also used in pyrimidine synthesis and salvage pathways. The first committed step is the reaction of PRPP, glutamine and water to 5′-phosphoribosylamine, glutamate, and pyrophosphate – catalyzed by pyrophosphate amidotransferase, which is activated by PRPP and inhibited by AMP, GMP and IMP.

Purine structure: A purine is a nucleotide (a nucleoside + phosphate group) that is amine based and planar, aromatic, and heterocyclic. The structure of purine is that of a cyclohexane(pyrimidine group) and cyclopentane(imidazole group) attached to one another; the Nitrogen atoms are at positions 1,3,7,9. Adenine(A) and Guanine(G) are examples of purines which are involved in the construction of the backbone of the DNA and RNA.

Both adenine and guanine are derived from the nucleotide inosine monophosphate (IMP), which is the first compound in the pathway to have a completely formed purine ring system. Inosine monophosphate is synthesized on a pre-existing ribose-phosphate through a complex pathway. The carbon and nitrogen atoms of the purine ring, 5 and 4 respectively, come from multiple sources. The amino acid glycine contributes all its carbon (2) and nitrogen (1) atoms, with additional nitrogen atoms coming from glutamine (2) and aspartic acid (1), and additional carbon atoms coming from formyl groups (2). These are transferred from the coenzyme tetrahydrofolate as 10-formyltetrahydrofolate, along with a carbon atom from bicarbonate (1). Formyl groups build carbon-2 and carbon-8 in the purine ring system, which are the ones acting as bridges between two nitrogen atoms. 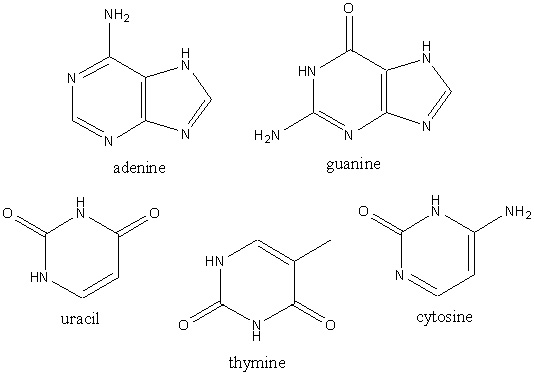 What forms a nucleic acid structure?: The four nitrogenous bases present in DNA are adenine (A), guanine (G), cytosine (C) and thymine (T). Adenine and guanine are purines and cytosine and thymine are pyrimidines.

Unlike purines, pyrimidines are assembled before being attached to 5-phosphoribosyl-1-pyrophosphate (PRPP). The first regulated step in pyrimidine biosynthesis is the formation of carbamoyl phosphate by carbamoyl phosphate synthetase II. This is then converted by carbamoyl aspartic acid by aspartic transcarbamolyase (aspartate carbamoyl transferase), which will be dehydrated to dihydroorotate by dihydroorotase. Dihydroorotate then enters the mitochondria, where it is oxidised into orotate through removal of hydrogens by dihydroorotate dehydrogenase. This is the only mitochondrial step in nucleotide rings biosynthesis. Orotate is then converted to OMP by orotate phosphoribosyltransferase. OMP will then be decarboxylated to UMP by OMP decarboxylase. UMP in turn will be converted to UDP by phosphorylation via uridine-cytidine kinase 2. UDP in turn will be phosphorylated to UTP by nucleoside diphosphate kinaseuridine 5′-triphosphate(UTP). UDP can also be converted to CTP by CTP synthase cytidine 5’triphosphate (CTP)using glutamine and ATP.The first three enzymes are all coded by the same gene in Metazoa (CAD).

In Fungi, a similar protein exists but lacks the dihydroorotase function: another protein catalyzes the second step. In other organisms (Bacteria, Archaea and the other Eukaryota), the first three steps are done by three different enzymes. CTP synthase (or CTP synthetase) is an enzyme involved in pyrimidine biosynthesis. It intraconverts UTP and CTP. The source of the amine/amino group in CTP is glutamine. CTP synthase is activated by GTP, a purine. This acts to balance the relative amounts of purine and pyrimidine nucleotides. CTP synthase is inhibited by reversible by CTP and irreversible for example by the glutamine analogon DON. The following human genes encode proteins that possess CTP synthase activity:

Nonribosomal peptides (NRP) are a class of peptide secondary metabolites which can function as antibiotics. 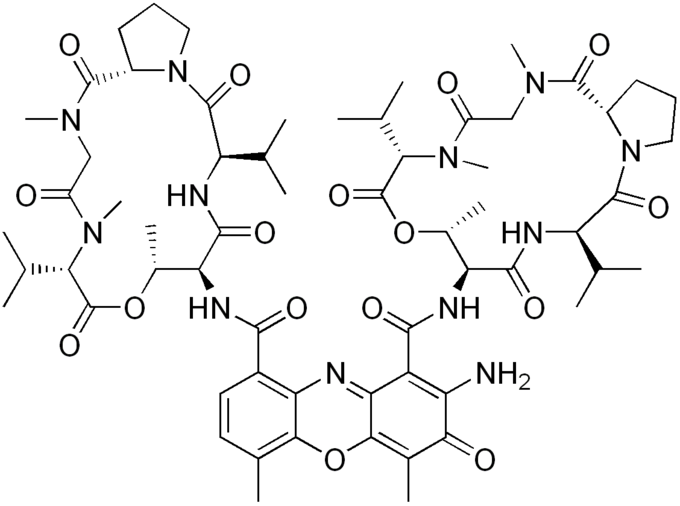 Actinomycin D: Actinomycin D (also known generically as Actinomycin or Dactinomycin), is the most significant member of actinomycines, which are a class of polypeptide antibiotics isolated from soil bacteria of the genus Streptomyces. As one of the older chemotherapy drugs, it has been used for many years.

Nonribosomal peptides are a very diverse family of natural products with an extremely broad range of biological activities and pharmacological properties. They are often toxins, siderophores, or pigments. Nonribosomal peptide antibiotics (for example, actinomycin D ), cytostatics, and immunosuppressants are used commercially.

Nonribosomal peptides are synthesized by one or more specialized nonribosomal peptide-synthetase (NRPS) enzymes. The NRPS genes for a certain peptide are usually organized in one operon in bacteria and in gene clusters in eukaryotes. However the first fungal NRP to be found was ciclosporin. It is synthesized by a single 1.6MDa NRPS. The enzymes are organized in modules that are responsible for the introduction of one additional amino acid. Each module consists of several domains with defined functions, separated by short spacer regions of about 15 amino acids.

Porphyrins are the conjugate acids of ligands that bind metals to form complexes.

Recall the process of tetrapyrrole biosynthesis

Porphyrins are a group of organic compounds, many naturally occurring. One of the best-known porphyrins is heme, the pigment in red blood cells. Heme is a cofactor of the protein hemoglobin. The main “application” of porphyrins is their role in supporting aerobic life. For example, complexes of meso-tetraphenylporphyrin, e.g., the iron(III) chloride complex (TPPFeCl), catalyze a variety of reactions of potential interest in organic synthesis.

Porphyrins are heterocyclic macrocycles composed of four modified pyrrole subunits interconnected at their α carbon atoms via methine bridges (=CH-). Porphyrins are aromatic, obeying Hückel’s rule for aromaticity, possessing 4n+2 π electrons (n=4 for the shortest cyclic path) delocalized over the macrocycle. Thus, porphyrin macrocycles are highly conjugated systems. As a consequence, they typically have very intense absorption bands in the visible region and may be deeply colored. (The name porphyrin comes from a Greek word for purple. ) The macrocycle has 26 pi electrons in total. The parent porphyrin is porphine, and substituted porphines are called porphyrins.

Structure of Porphine: Porphine is the simplest porphyrin, an aromatic organic compound.

Porphyrins are the conjugate acids of ligands that bind metals to form complexes. The metal ion usually has a charge of 2+ or 3+. A schematic equation for these syntheses is:

A porphyrin without a metal ion in its cavity is a free base. Some iron-containing porphyrins are called hemes. Heme-containing proteins, or hemoproteins, are found extensively in nature. Hemoglobin and myoglobin are two O2-binding proteins that contain iron porphyrins. Various cytochromes are also hemoproteins. Several other heterocycles are related to porphyrins. These include corrins, chlorins, bacteriochlorophylls and corphins. Chlorins (2,3-dihydroporphyrin) are more reduced, contain more hydrogen than porphyrins, and feature a pyrroline subunit. This structure occurs in a chlorophyll molecule. Replacement of two of the four pyrrolic subunits with pyrrolinic subunits results in either a bacteriochlorin (as found in some photosynthetic bacteria) or an isobacteriochlorin, depending on the relative positions of the reduced rings. Some porphyrin derivatives follow Hückel’s rule, but most do not.

The “committed step” for porphyrin biosynthesis is the formation of δ-aminolevulinic acid (δ-ALA, 5-ALA or dALA) by the reaction of the amino acid glycine with succinyl-CoA from the citric acid cycle. Two molecules of dALA combine to give porphobilinogen (PBG), which contains a pyrrole ring. Four PBGs are then combined through deamination into hydroxymethyl bilane (HMB), which is hydrolysed to form the circular tetrapyrrole uroporphyrinogen III. This molecule undergoes a number of further modifications. Intermediates are used in different species to form particular substances, but, in humans, the main end-product protoporphyrin IX is combined with iron to form heme. Bile pigments are the breakdown products of heme.