Dendritic cells are immune cells that function to process antigens and present them to T cells.

Discuss the mechanism of action for dendritic cells 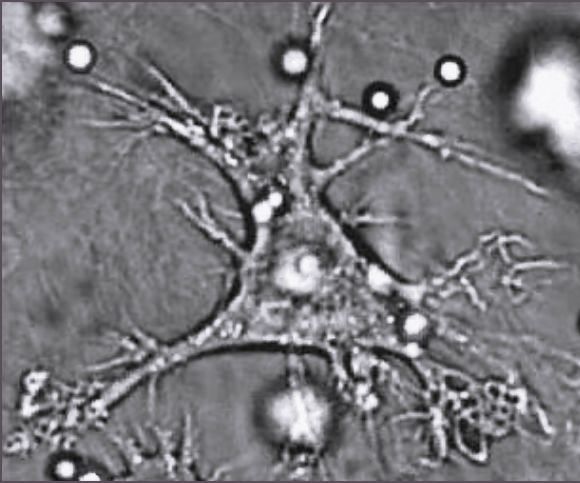 Dendritic cells are constantly in communication with other cells in the body. This communication can take the form of direct cell-to-cell contact based on the interaction of cell-surface proteins. An example of this includes the interaction of the membrane proteins of the B7 family of the dendritic cell with a CD28 cell surface molecule present on the lymphocyte. However, the cell-cell interaction can also take place at a distance via soluble factors such as cytokines. For example, stimulating dendritic cells in vivo with microbial extracts causes the dendritic cells to rapidly begin producing interleukin 12 (IL-12). IL-12 is a signal that helps differentiate naive CD4 T cells into a helper T cell phenotype. The ultimate consequence is priming and activation of the immune system for attack against the antigens which the dendritic cell presents on its surface.

Phagocytosis is a front-line defense against pathogen attack requiring the concerted action of macrophages.

Describe the role of macrophages in the immune system

Macrophages are antigen presenting cells that actively phagocytose large particles. Therefore, they play an important role in presenting antigens derived from phagocytosed infectious organisms such as bacteria and parasites. In the effector phase of cell-mediated immunity, differentiated effector T cells recognize microbial antigens on phagocytes and activate the macrophages to destroy these engulfed microbes. Most macrophages express high levels of interferon-gamma, a mechanism through which antigen presentation and T cell activation is enhanced. Macrophages can be identified by specific expression of a number of proteins including CD14, CD40, CD11b, F4/80(mice)/EMR1(human), lysozyme M, MAC-1/MAC-3 and CD68. They move by the action of amoeboid movement.

Macrophages are not cells exclusive to the immune system; they also play a central function in many other aspects of embryonic development, homeostasis and wound repair. Resident macrophages become adapted to perform particular functions in different organs; so that brain macrophages (microglia) are very different from alveolar macrophages of the lung, Kupffer cells of the liver, or the largest tissue macrophage population, those lining the wall of the gut.

Monocytes are recruited into tissues in response to a very wide range of different stimuli. Where a pathogen is involved, they are commonly preceded by neutrophils, which release a range of toxic agents designed to kill extracellular pathogens. The macrophage then has the task of clearing both the dead pathogens and the dead neutrophils. To enter a tissue, the monocyte in peripheral blood must adhere to the vessel wall, cross the endothelial cell barrier, and then migrate towards the stimulus; a process known as chemotaxis.

The process of recruitment of neutrophils and macrophages involves the resident macrophages which act as sentinels. They respond to local stimuli by producing cytokines that make the endothelial cells more sticky (through the increased expression of cell adhesion molecules such as P-selectin) and so-called chemokines, that promote the directed migration of inflammatory cells. Monocytes may also migrate towards increasing concentrations of molecules produced by microorganisms themselves, by damaged tissues, or by the activation of the complement or clotting cascades which release bioactive peptides such as C5a.