Different approches are used to target the initial and final steps of a virus life cycle.

Compare the mechanisms of the discussed antiviral drugs

A viral infection starts with entry of the virus into the cell. The entry mechanism is complex, consists of multiple steps and involves host cell structures.

Virus infection starts with a virus attaching to the host cell by binding to a receptor molecule. There are two main strategies used to design antiviral drugs at this step:

The search for such drugs, however, is very expensive and time-consuming.

Another drug target is the uncoating step during viral infection. Uncoating is the process of capsid disintegration, which leads to the release of the genomic material. This step is performed by viral or host enzymes, or by capsid dissociation alone. Drugs that can perform such functions are used against the influenza virus, rhinoviruses (the cause of the common cold), and enteroviruses (gastrointestinal infections, meningitis, etc.). It is believed that such drugs prevent the virus from uncoating by blocking the proteins on the capsid responsible for uncoating, such as ion channel proteins. An example of such a drug is Rimantadine, which blocks the ion channel in the influenza virus. The ion channel has an important role in disintegrating the viral capsid. 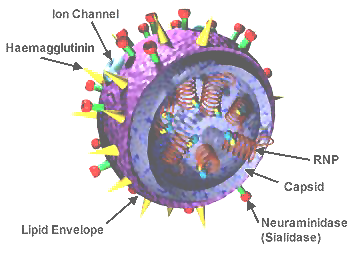 Structure (3D) of the Influenza Virus: The image depicts the major components of the virus structure, including the neuraminidase.

Targeting the Release of the Newly Formed Viral Particles

The last step in the virus life cycle—release from the cell—has been targeted by drugs as well. Neuraminidase is an enzyme on the capsid of influenza virus. It cleaves sialic acid from glycoproteins on the surface of the host cell and allows the viral particles to leave the cell. Tamiflu and Relenza are trend names of two drugs used to treat influenza infections by targeting neuraminidase.

Since viruses use many structures in the host cells to replicate, designing or discovering good antiviral drugs that will not affect the eukaryotic cells is a challenging task. Serious side effects are often observed with the use of antiviral drugs, as is resistance against the drugs. Developing drugs that inhibit different steps in the virus life cycle is of critical importance.

Inhibiting DNA synthesis during viral replication is another approach to battle viral infections. 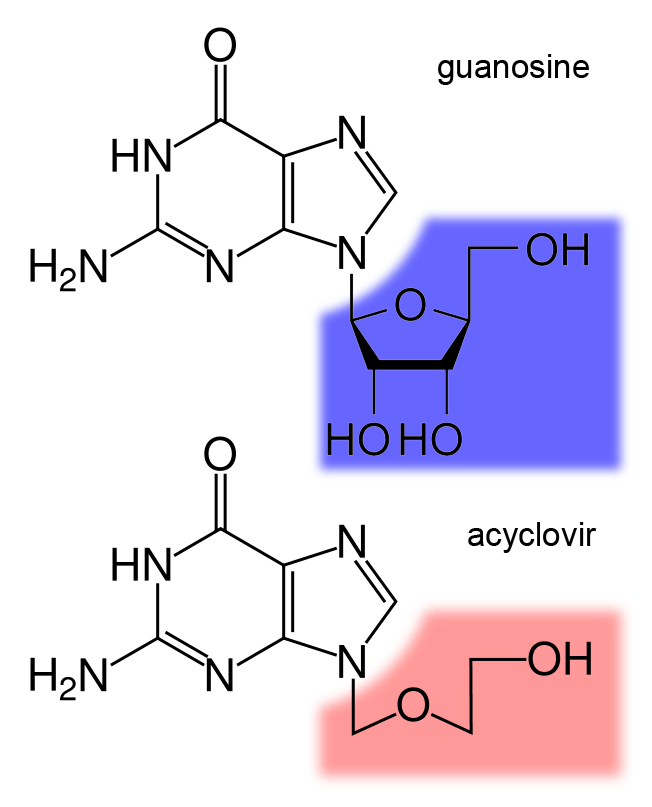 One of the most often used antiviral drugs that works with the described mechanism is acyclovir (aciclovir), a guanosine analogue. It is used to treat herpes simplex virus infections (type 1 and type 2) as well as chicken pox and shingles. It was designed based on nucleosides isolated from a Caribbean sponge. After administration, the molecule gets activated by phosphorylation both by viral and host cell kinases and the resulting nucleotide incorporated into the newly synthesized DNA resulting in premature chain termination. The drug has very low cytotoxicity and there is low resistance to it.

Other drugs that are also nucleoside analogues and have the same mode of actions are ganciclovir (a synthetic analogue of 2′-deoxy-guanosine) and vidarabine(an adenosine analog). However, both drugs are more toxic and have more serious side effects than acyclovir.

Another type of drug that is a DNA synthesis inhibitor is foscarnet. It mimics pyrophosphate and inactivates the activity of the DNA polymerase. This inhibitor is active against the viral DNA polymerases at doses much lower than the ones needed to inhibit the human polymerases. This drug is used in cases of resistance against acyclovir and ganciclovir nucleoside analogue chemicals. It is also used to treat cytomegalovirus infection (CMV) and specifically CMV retinitis.

Reverse transcriptase in viruses is inhibited by nucleoside (nucleotide) analogues or drugs that change the conformation of the enzyme.

Summarize the mechanism of action for reverse transcriptase inhibitors

Reverse transcriptase is an enzyme that has the ability to transcribe single-stranded DNA from a single-stranded RNA chain. This is the reverse of the usual flow of information when RNA is synthesized from DNA. Viruses that use reverse transcriptase to convert their genetic material (RNA) into DNA are called retroviruses. One of the most prominent representative of a retrovirus is HIV. Due to the high prevalence of HIV/AIDS in the world, it is important to have drugs that will prevent or cure the infection. This enzyme is also found in tumors and cancer cells.

Estimation of adults with HIV/AIDS by country: The data shows the people, between 18-49 years, by country who are affected by HIV/AIDS. The information is provided by UNAIDS based on a report from July 2008

Drugs that inhibit the function of this enzyme are divided into three groups:

The first two inhibitors act on the same principle. They mimic, respectively, nucleosides or nucleotides but lack a free hydroxyl group at the 3′ end. The major difference between them is that the nucleosides need to be phosphorylated by cellular kinases. The enzyme reverse transcriptase recognizes them as regular nucleotides and inserts them into the newly synthesized DNA chain. But once inserted the elongation stops at them because no more nucleotides can be added due to the lack of the 3′ hydroxyl group and the inability of the formation of 5′-3′ phosphodiester bond. This process is called chain termination. Nucleoside and nucleotide inhibitors are also called competitive substrate inhibitors. Examples of such drugs are Zidovudine (AZT) and Lamivudine. AZT was the first FDA approved drug for the treatment of HIV. Lamivudine is used for the treatment of both HIV and hepatitis B. Since some viruses, such as hepatitis B, carry RNA-dependent DNA polymerases reverse transcriptase inhibitors can be used to treat these infections as well.

Resistance occurs to all drug groups. The mechanisms for resistance against the nucleoside (nucleotide) inhibitors are two. The first one is due to mutations in the N-terminal polymerase domain of the reverse transcriptase that makes it less likely to incorporate the analogues. The second mechanism is caused by mutations in the transcriptase that allow the removal of the incorporated inhibitor and hence restart of DNA replication.

Protease inhibitors target viral proteases which are key enzymes for the completion of viral maturation.

Describe the mechanism of action for protease inhibitors

Proteases are enzymes that have the ability to cut proteins into peptides. They are used by some viruses (e.g., HIV) to cleave precursor long protein chains into individual proteins. This allows the completion of the assembly step in the viral life cycle where the proteins and the viral RNA come together to form virion particles ready to exit the cell. 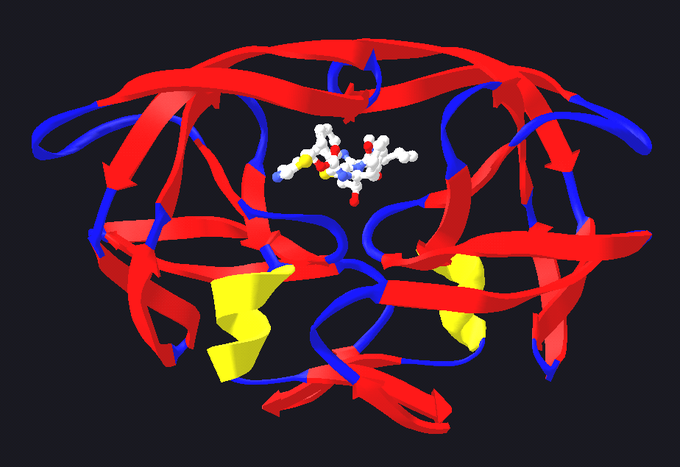 HIV protease with bound protease inhibitor: The drug is ritonavir depicted here with a white molecule in the middle of the enzyme structure.

Protease inhibitors are short peptide-like molecules that are competitive inhibitors of the enzyme. Instead of -NH-CO- peptide link, they contain -(CH2-CH(OH)-). When such a peptide gets into the enzyme active site, the protease is unable to cut the linkage and gets inactivated. This leads to a lack of cleavage of the polypeptide chains of two crucial viral proteins, Gag and Pol, which are essential structural and enzymatic proteins of HIV. Their absence blocks the formation of mature virion particles.

Saquinavir is the first clinically used peptide-like inhibitor. Some protease inhibitors do not mimic peptides in their structure. One such drug is Nelfinavir. In general, protease inhibitors exhibit the unusual side effect of fat storage in non-typical organs and tissues. The reasons for this are still unclear.

Mutations in the enzyme active site and other sites, which cause conformational changes, can cause resistance. Quite often one mutation can lead to resistance to many different drugs simultaneously since they all share the same mode of action. This is called cross-resistance. It is one of the major drawbacks of protease inhibitors therapy.