Bacterial Diseases of the Urinary System

The most common cause of infection is Escherichia coli, though other bacteria or fungi may rarely be the cause. Risk factors include female anatomy, sexual intercourse, diabetes, obesity, and family history. Although sexual intercourse is a risk factor, UTIs are not classified as sexually transmitted infections (STIs). Kidney infection, if it occurs, usually follows a bladder infection but may also result from a blood-borne infection. Diagnosis in young healthy women can be based on symptoms alone. In those with vague symptoms, diagnosis can be difficult because bacteria may be present without there being an infection. In complicated cases or if treatment fails, a urine culture may be useful.

In uncomplicated cases, a diagnosis may be made and treatment given based on symptoms alone without further laboratory confirmation, and treatment involves a short course of antibiotics such as nitrofurantoin or trimethoprim / sulfamethoxazole. Resistance to many of the antibiotics used to treat this condition is increasing.

In complicated cases, it may be useful to confirm the diagnosis via urinalysis, looking for the presence of urinary nitrites, white blood cells ( leukocytes ), or leukocyte esterase. Another test, urine microscopy, looks for the presence of red blood cells, white blood cells, or bacteria. A longer course or intravenous antibiotics may be needed. If symptoms do not improved in two or three days, further diagnostic testing may be needed. Phenazopyridine may help with symptoms. In those who have bacteria or white blood cells in their urine but have no symptoms, antibiotics are generally not needed, although during pregnancy is an exception. In those with frequent infections, a short course of antibiotics may be taken as soon as symptoms begin or long term antibiotics may be used as a preventative measure. 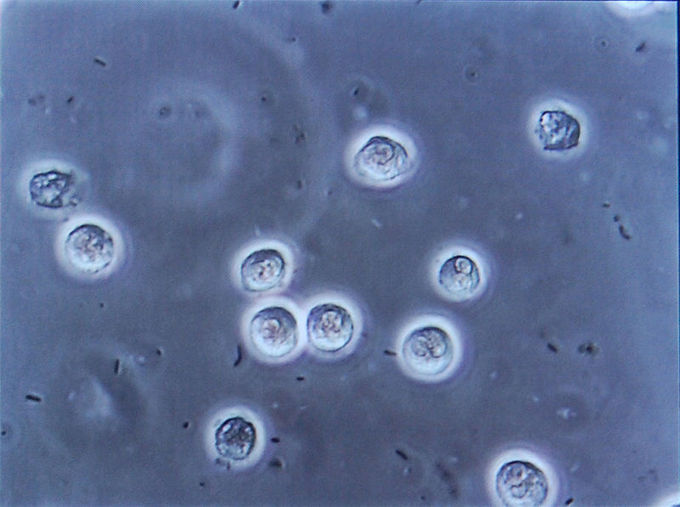 Bacteriuria and Pyuria: Multiple bacilli (rod-shaped bacteria, here shown as black and bean-shaped) shown between white blood cells in urinary microscopy. These changes are indicative of a urinary tract infection.

Lower urinary tract infection is also referred to as a bladder infection. The most common symptoms are burning with urination and having to urinate frequently (or an urge to urinate) in the absence of vaginal discharge and significant pain. These symptoms may vary from mild to severe and in healthy women last an average of six days. Some pain above the pubic bone or in the lower back may be present.

A number of measures have not been confirmed to affect UTI frequency including: urinating immediately after intercourse, the type of underwear used, personal hygiene methods used after urinating or defecating, or whether a person typically bathes or showers. There is similarly a lack of evidence surrounding the effect of holding one’s urine, tampon use, and douching. In those with frequent urinary tract infections who use spermicide or a diaphragm as a method of contraception, they are advised to use alternative methods. In those with benign prostatic hyperplasia urinating in a sitting position appears to improve bladder emptying which might decrease urinary tract infections in this group.

For those with recurrent infections, taking a short course of antibiotics when each infection occurs is associated with the lowest antibiotic use. A prolonged course of daily antibiotics is also effective. Medications frequently used include nitrofurantoin and trimethoprim/sulfamethoxazole (TMP/SMX). Methenamine is another agent used for this purpose as in the bladder where the acidity is low it produces formaldehyde to which resistance does not develop. Some recommend against prolonged use due to concerns of antibiotic resistance.

Cystitis is a urinary bladder inflammation that is most commonly caused by a bacterial infection of the lower urinary tract infection.

Cystitis is a urinary bladder inflammation that can result from any one of a number of distinct syndromes. It is most commonly caused by a bacterial infection in which case it is referred to as a urinary tract infection. 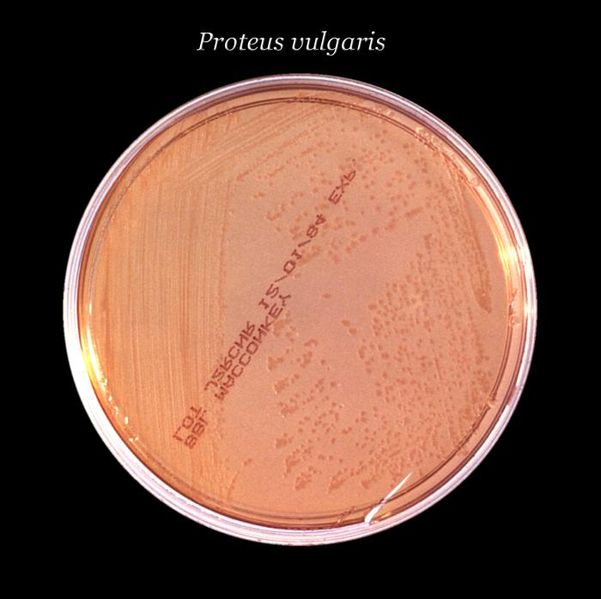 Proteus vulgaris on MacConkey agar: After 24 hours, this inoculated MacConkey agar culture plate cultivated colonial growth of Gram-negative, rod-shaped, and facultatively anaerobic Proteus vulgaris bacteria. Normally found in the humans gastrointestinal tract, Proteus spp. are opportunistic pathogens, which means that they usually do not cause disease. However, under immunocompromised circumstances, i.e., weakened immunity, these bacteria can be found the culprit responsible for urinary tract infections such as cystitis and pyelonephritis.

There are several medically distinct types of cystitis, each having a unique etiology and therapeutic approach:

Pyelonephritis is an inflammation of the kidney tissue and surrounding area, commonly caused by a bacterial infection ascending up the upper urinary tract.

Identify the main symptoms of pyelonephritis 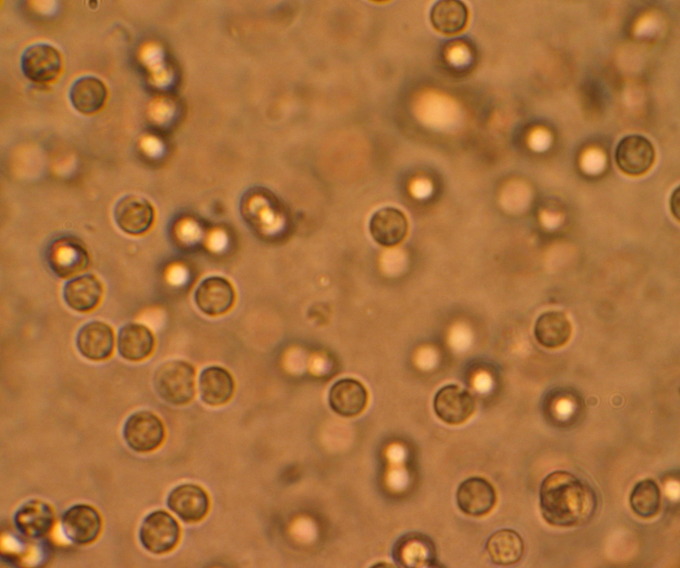 Urinary tract infection (UTI): White blood cells in the urine of someone with a UTI, seen under a microscope.

Pyelonephritis is an inflammation of the kidney tissue, calyces, and renal pelvis. It is commonly caused by bacterial infection that has spread up the urinary tract or travelled through the bloodstream to the kidneys.

A similar term is “pyelitis” which means inflammation of the pelvis and calyces. In other words, pyelitis together with nephritis is collectively known as pyelonephritis. Severe cases of pyelonephritis can lead to pyonephrosis (pus accumulation around the kidney), sepsis (a systemic inflammatory response of the body to infection), kidney failure and even death.

Pyelonephritis presents with fever, accelerated heart rate, painful urination, abdominal pain radiating to the back, nausea, and tenderness at the costovertebral angle on the affected side. Pyelonephritis that has progressed to urosepsis may be accompanied by signs of septic shock, including rapid breathing, decreased blood pressure, violent shivering, and occasionally delirium. Pyelonephritis requires antibiotic therapy, and sometimes surgical intervention, as well as treatment of any underlying causes to prevent its recurrence.

Leptospirosis is a rare and severe infection caused by Leptospira bacteria and usually transmitted to people from animals.

Generalize the causes and mode of transmission for leptospirosis

Leptospirosis (also known as Weil’s Syndrome, canicola fever, canefield fever, nanukayami fever, 7-day fever, Rat Catcher’s Yellows, Fort Bragg fever, black jaundice, and Pretibial fever) is caused by bacteria of the genus Leptospira, and affects humans as well as other animals. Symptoms can range from none to mild such as headaches, muscle pains, and fevers; to severe with bleeding from the lungs or meningitis. If the infection causes the person to turn yellow, have kidney failure and bleeding it is then known as Weil’s disease. If the infection causes lots of bleeding from the lungs it is known as severe pulmonary haemorrhage syndrome. 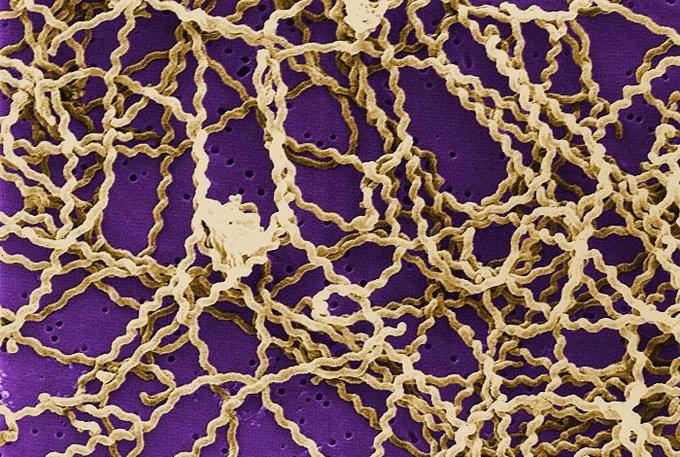 Leptospira bactera that cause Leptospirosis: Scanning electron micrograph of a number of Leptospira sp. bacteria atop a 0.1 µm polycarbonate filter.

Cause and Transmission of Leptospirosis

Leptospirosis is among the world’s most common diseases transmitted to people from animals. The infection is commonly transmitted to humans by allowing water that has been contaminated by animal urine to come in contact with unhealed breaks in the skin, eyes, or mucous membranes. Outside of tropical areas, leptospirosis cases have a relatively distinct seasonality, with most cases occurring in spring and autumn.

Leptospirosis is caused by a spirochaete bacterium called Leptospira spp. There are at least five serotypes of importance in the United States and Canada, all of which cause disease in dogs (Icterohaemorrhagiae, Canicola, Pomona, Grippotyphosa, and Bratislava).There are other (less common) infectious strains as well. Leptospirosis is transmitted by the urine of an infected animal and is contagious as long as it is still moist. Although rats, mice, and moles are important primary hosts, a wide range of other mammals (including dogs, deer, rabbits, hedgehogs, cows, sheep, raccoons, opossums, skunks, and certain marine mammals) are able to carry and transmit the disease as secondary hosts. Dogs may lick the urine of an infected animal off the grass or soil or drink from an infected puddle. 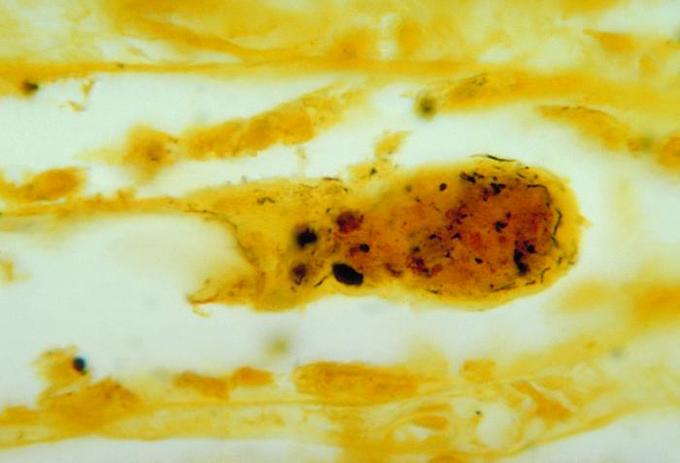 There have been reports of “house dogs” contracting leptospirosis from licking the urine of infected mice that enter the house. The type of habitats most likely to carry infectious bacteria are muddy riverbanks, ditches, gullies, and muddy livestock-rearing areas where there is regular passage of either wild or farm mammals. There is a direct correlation between the amount of rainfall and the incidence of leptospirosis, making it seasonal in temperate climates and year-round in tropical climates. Leptospirosis is also transmitted by the semen of infected animals. Humans become infected through contact with water, food, or soil containing urine from these infected animals. This may result from swallowing contaminated food and water or through skin contact. The disease is not known to be spread from person to person, and cases of bacterial dissemination in convalescence are extremely rare in humans. Leptospirosis is common among water-sport enthusiasts in specific areas, as prolonged immersion in water is known to promote the entry of the bacteria. Surfers and whitewater paddlers are at especially high risk in areas that have been shown to contain the bacteria, and can contract the disease by swallowing contaminated water, splashing contaminated water into their eyes or nose, or exposing open wounds to infected water.