Bacteria are a subset of prokaryotes and while very different, they still have some common features.

Bacteria constitute a large domain of prokaryotic microorganisms. Bacteria were among the first life forms to appear on Earth, and are present in most habitats on the planet. Bacteria grow in soil, acidic hot springs, radioactive waste, water, and deep in the Earth’s crust. In addition, they grow in organic matter and the live bodies of plants and animals, providing outstanding examples of mutualism in the digestive tracts of humans, termites, and cockroaches.

But what defines a bacteria? Bacteria as prokaryotes share many common features, such as:

Bacteria do not tend to have membrane-bound organelles in their cytoplasm and thus contain few large intracellular structures. They consequently lack a true nucleus, mitochondria, chloroplasts, and the other organelles present in eukaryotic cells, such as the Golgi apparatus and endoplasmic reticulum. Bacteria were once seen as simple bags of cytoplasm, but elements such as prokaryotic cytoskeleton, and the localization of proteins to specific locations within the cytoplasm have been found to show levels of complexity. These subcellular compartments have been called “bacterial hyperstructures”.

Perhaps the most obvious structural characteristic of bacteria is (with some exceptions) their small size. For example, Escherichia coli cells, an “average” sized bacterium, are about 2 micrometres (μm) long and 0.5 μm in diameter. Small size is extremely important because it allows for a large surface area-to-volume ratio which allows for rapid uptake and intracellular distribution of nutrients and excretion of wastes.

The term “bacteria” was traditionally applied to all microscopic, single-cell prokaryotes, having the similar traits outlined above. However, molecular systematics show prokaryotic life to consist of two separate domains, originally called Eubacteria and Archaebacteria, but now called Bacteria and Archaea that evolved independently from an ancient common ancestor. The archaea and eukaryotes are more closely related to each other than either is to the bacteria. It should be noted that Bacteria and Archaea are similar physically, but have different ancestral origins as determined by DNA of the genomes that encode different prokaryotes. 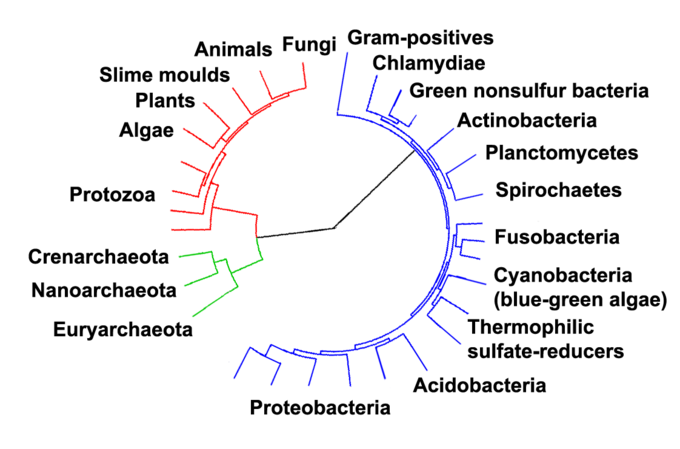 To classify a species of bacteria, one usually needs to isolate and grow up the species that is to be classified.

Classification seeks to describe the diversity of bacterial species by naming and grouping organisms based on similarities. Bacteria can be classified on the basis of cell structure, cellular metabolism, or by differences in cell components such as DNA, fatty acids, pigments, antigens, and quinones.

While these schemes previously allowed the identification and classification of bacterial strains, it was long unclear whether these differences represented variation between distinct species or between strains of the same species. This uncertainty resulted from the lack of distinctive structures in most bacteria, as well as lateral gene transfer that occurred between unrelated species. Because of the existence of lateral gene transfer, some closely related bacteria have very different morphologies and metabolisms.

To overcome these uncertainties, modern bacterial classification emphasizes molecular systematics, using genetic techniques such as guanine cytosine ratio determination, genome-genome hybridization, as well as sequencing genes that have not undergone extensive lateral gene transfer, such as the rRNA gene.

While there are several molecular tools that allow us to classify or distinguish different bacterial species, this is predicated on obtaining uni-species cultures of a given bacteria. Culture techniques are designed to promote the growth and identify particular bacteria, while restricting the growth of the other bacteria in the sample. Often these techniques are designed for specific specimens; for example, a sputum sample will be treated to identify organisms that cause pneumonia, while stool specimens are cultured on selective media to identify organisms that cause diarrhoea while preventing growth of non- pathogenic bacteria. Specimens that are normally sterile, such as blood, urine, or spinal fluid, are cultured under conditions designed to grow all possible organisms. Once a pathogenic organism has been isolated, it can be further characterized by its morphology, by growth patterns such as aerobic or anaerobic growth, by patterns of hemolysis and by staining. If a bacteria can not be cultured, classification can prove to be very difficult.

However, recent advances in molecular techniques do allow the sequencing of DNA from bacterial species, without the reliance on a pure culture of that given bacteria. Diagnostics using such DNA-based tools, such as polymerase chain reaction, are increasingly popular due to their specificity and speed, compared to culture-based methods. These methods also allow the detection and identification of “viable but nonculturable” cells that are metabolically active but non-dividing, which can be applied to isolates of bacterial species that cannot be cultured. However, even using these improved methods, the total number of bacterial species is not known and cannot even be estimated with any certainty. Following present classification, there are a little less than 9,300 known species of prokaryotes, which includes bacteria and archaea. Attempts to estimate the true level of bacterial diversity have ranged from 107 to 109 total species – and even these diverse estimates may be off by many orders of magnitude.