There are numerous tests and assays available that are utilized to aid in bacterial identification in a variety of settings.

Within the field of microbiology, there are specific tests or assays utilized to quantitatively and qualitatively measure microorganism components. These assays are often utilized to aid in bacterial identification. Three major types used for this purpose include chemical assays, radio isotopic methods and the use of micro electrodes. The following is an overview of these methodologies.

Chemical assays are utilized to identify and determine chemical components within a microorganism. Many of these assays test for specific cellular components and may have overlap with chemical analysis, which focuses on exact chemical composition.

Examples of chemical assays include the classic test for Gram-positive or Gram-negative bacteria via Gram staining. Gram staining is utilized to differentiate bacteria into either of these Gram groups. The Gram staining technique is based on both chemical and physical properties of bacterial cell walls and tests for the presence of peptidoglycan. 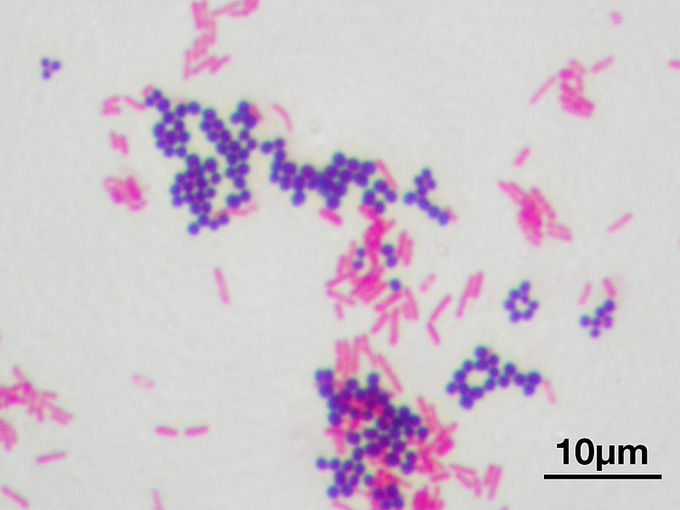 Gram Staining: An example of a chemical assay used for bacterial identification.

The O-F test is utilized to determine the way in which a bacteria is capable of metabolizing carbohydrates such as glucose. The two major mechanisms from which bacteria can obtain energy include oxidation of glucose and lactose fermentation. This specific assay identifies which method bacteria use by cultivating bacteria in various conditions.

The process of hydrolysis is characterized by the ability to chemically split a molecule by the addition of water. There are numerous tests utilized in bacterial identification which involve testing for hydrolysis of specific substances. These tests include hydrolysis of starch, lipids, casein and gelatin. The basis of these tests is to identify and determine if a microbe has the proper enzymes and molecules to breakdown and use these specific molecules as sources of energy for cellular growth.

Radioisotopes are specific types of isotopes that emit radioactivity. Isotopes of an element vary in the number of neutrons within their nuclei. In the field of microbiology, radioisotopes have been used

Electrodes are characterized by a system of electrical conductors that are used to make contact with a non-metallic portion of a circuit. In regards to microbiology and bacterial identification, micro-electrodes are commonly being utilized to identify pathogenic bacteria in numerous settings. The micro-electrodes have the capability to function as bio-sensors and detect specific biological components of microbes.

Stable isotopes are atoms that are not radioactive, in other words, they are not going to lose neutrons and decay spontaneously.

Demonstrate how isotopes are used in bacterial identification

Table of Isotopes: This is a table that represents atom decay yielding various isotopes.

Knowledge about stable isotopes is important in a variety of fields. Scientists have used information on these topics in botanical and plant biological investigations as well as ecological and biological studies. Additionally, some scientists have used oxygen isotope ratios to reconstruct historical atmospheric temperatures. This work is especially important due to our current concern with climate change/global warming.