The International Committee on Taxonomy of Viruses

The International Committee on Taxonomy of Viruses (ICTV) is a committee which authorizes and organizes the taxonomic classification of viruses. They have developed a universal taxonomic scheme for viruses and aim to describe all the viruses of living organisms. Members of the committee are considered to be world experts on viruses. The committee formed from and is governed by the Virology Division of the International Union of Microbiological Societies. Detailed work such as delimiting the boundaries of species within a family is typically done by study groups, which consist of experts in the families. The committee also operates an authoritative database (ICTVdB) containing taxonomic information for 1,950 virus species, as of 2005. It is open to the public and is searchable by several different means.

The official objectives of the ICTV are:

Proposals for new names, name changes, and the establishment and taxonomic placement of taxa are handled by the Executive Committee of the ICTV in the form of proposals. All relevant ICTV subcommittees and study groups are consulted prior to a decision being made. The name of a taxon has no status until it has been approved by ICTV, and names will only be accepted if they are linked to approved hierarchical taxa. If no suitable name is proposed for a taxon, the taxon may be approved and the name be left undecided until the adoption of an acceptable international name, when one is proposed to and accepted by ICTV. Names must not convey a meaning for the taxon which would seem to either exclude viruses which are rightfully members of that taxa, exclude members which might one day belong to that taxa, or include viruses which are members of different taxa.

The Baltimore classification groups viruses into families depending on their type of genome.

List the characteristics of viruses that are useful for Baltimore classification

Baltimore classification (first defined in 1971) is a classification system that places viruses into one of seven groups depending on a combination of their nucleic acid (DNA or RNA), strandedness (single-stranded or double-stranded), Sense, and method of replication. Named after David Baltimore, a Nobel Prize-winning biologist, these groups are designated by Roman numerals and discriminate viruses depending on their mode of replication and genome type. Other classifications are determined by the disease caused by the virus or its morphology, neither of which are satisfactory due to different viruses either causing the same disease or looking very similar. In addition, viral structures are often difficult to determine under the microscope.

Classifying viruses according to their genome means that those in a given category will all behave in a similar fashion, offering some indication of how to proceed with further research. Viruses can be placed in one of the seven following groups:

The evolution of viruses is speculative as they do not fossilize; biochemical and genetic information is used to create virus histories.

Describe the difficulties in determining the origin of viruses

Although biologists have accumulated a significant amount of knowledge about how present-day viruses evolve, much less is known about how viruses originated in the first place. When exploring the evolutionary history of most organisms, scientists can look at fossil records and similar historic evidence. However, viruses do not fossilize, so researchers must conjecture by investigating how today’s viruses evolve and by using biochemical and genetic information to create speculative virus histories.

While most findings agree that viruses don’t have a single common ancestor, scholars have yet to find one hypothesis about virus origins that is fully accepted in the field. One possible hypothesis, called devolution or the regressive hypothesis, proposes to explain the origin of viruses by suggesting that viruses evolved from free-living cells. However, many components of how this process might have occurred are a mystery. A second hypothesis (called escapist or the progressive hypothesis) accounts for viruses having either an RNA or a DNA genome and suggests that viruses originated from RNA and DNA molecules that escaped from a host cell. A third hypothesis posits a system of self-replication similar to that of other self-replicating molecules, probably evolving alongside the cells they rely on as hosts; studies of some plant pathogens support this hypothesis. 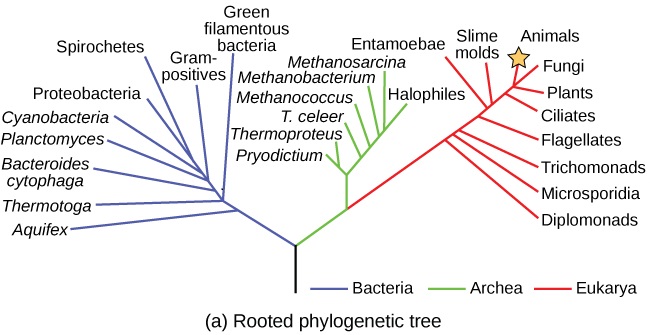 Common ancestor tree of life: This phylogenetic tree of the three domains of life (Bacteria, Archaea, and Eukarya) attempts to identify when various species diverged from a common ancestor. Finding a common ancestor for viruses has proven to be far more difficult, especially since they do not fossilize.

As technology advances, scientists may develop and refine further hypotheses to explain the origin of viruses. The emerging field called virus molecular systematics attempts to do just that through comparisons of sequenced genetic material. These researchers hope to one day better understand the origin of viruses, a discovery that could lead to advances in the treatments for the ailments they produce.

Describe the fundamental characteristics of viruses

Viruses are extremely diverse and have evolved to infect nearly all life forms. Amid this diversity, viruses with similar genome organizations exhibit major conserved themes in their replication strategies. Once inside a cell, all viruses must uncoat, replicate, and transcribe their genomes, and then repackage their genomes into viral progeny that are released from cells. RNA viruses in particular must coordinate the switch between plus and minus strand synthesis and between replication and transcription while protecting their genomes from cellular nucleases. Because of the conserved nature of a virus ‘s intracellular life cycle, fundamental advances in our understanding of replication have come from viruses that infect both animal and non-animal hosts.

The devastating effects of viral diseases such as AIDs, smallpox, polio, influenza, diarrhea, and hepatitis are well known, and studies of viral pathogens are easily justified from a world health perspective. Sobering examples of emerging viral diseases have occurred. Among these are the sudden emergence of the coronavirus that causes severe acute respiratory syndrome (SARS), the continued transmission of an avian influenza virus to humans (“bird flu”), and the isolation of poliovirus vaccine -wild type recombinants that have hampered poliovirus eradication efforts. In addition, the threat of bioterrorism became a reality on U.S. soil, creating an obligation for scientists to respond with aggressive countermeasures. Vaccination remains the preferred strategy for controlling viral diseases because the intimate association of viruses with the host cellular machinery complicates the development of safe drugs. However, certain viruses have proven difficult targets for vaccines, and antiviral drugs provide the only option for controlling disease. 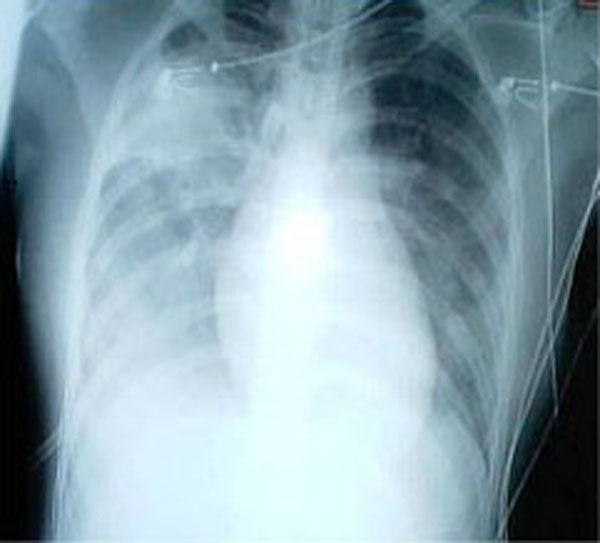 Medical importance of SARS: A chest x-ray showing increased opacity in both lungs, indicative of pneumonia, in a patient with SARS.