The genetic code is a degenerate, non-overlapping set of 64 codons that encodes for 21 amino acids and 3 stop codons.

There are 21 genetically-encoded amino acids universally found in the species from all three domains of life. ( There is a 22nd genetically-encooded amino acid, Pyl, but so far it has only been found in a handful of Archaea and Bacteria species.) Yet there are only four different nucleotides in DNA or RNA, so a minimum of three nucleotides are needed to code each of the 21 (or 22) amino acids. The set of three nucleotides that codes for a single amino acid is known as a codon. There are 64 codons in total, 61 that encode amino acids and 3 that code for chain termination. Two of the codons for chain termination can, under certain circumstances, instead code for amino acids.

Origin of transcription on prokaryotic organisms

Prokaryotes are mostly single-celled organisms that, by definition, lack membrane-bound nuclei and other organelles. The central region of the cell in which prokaryotic DNA resides is called the nucleoid region. Bacterial and Archaeal chromosomes are covalently-closed circles that are not as extensively compacted as eukaryotic chromosomes, but are compacted nonetheless as the diameter of a typical prokaryotic chromosome is larger than the diameter of a typical prokaryotic cell. Additionally, prokaryotes often have abundant plasmids, which are shorter, circular DNA molecules that may only contain one or a few genes and often carry traits such as antibiotic resistance.

Transcription in prokaryotes (as in eukaryotes) requires the DNA double helix to partially unwind in the region of RNA synthesis. The region of unwinding is called a transcription bubble. Transcription always proceeds from the same DNA strand for each gene, which is called the template strand. The RNA product is complementary to the template strand and is almost identical to the other (non-template) DNA strand, called the sense or coding strand. The only difference is that in RNA all of the T nucleotides are replaced with U nucleotides.

The trp Operon: A Repressor Operon

The trp operon is a repressor operon that is either activated or repressed based on the levels of tryptophan in the environment.

The trp Operon: A Repressor Operon

Bacteria such as E. coli need amino acids to survive. Tryptophan is one such amino acid that E. coli can ingest from the environment. E. coli can also synthesize tryptophan using enzymes that are encoded by five genes. These five genes are next to each other in what is called the tryptophan (trp) operon. If tryptophan is present in the environment, then E. coli does not need to synthesize it; the switch controlling the activation of the genes in the trp operon is turned off. However, when tryptophan availability is low, the switch controlling the operon is turned on, transcription is initiated, the genes are expressed, and tryptophan is synthesized. 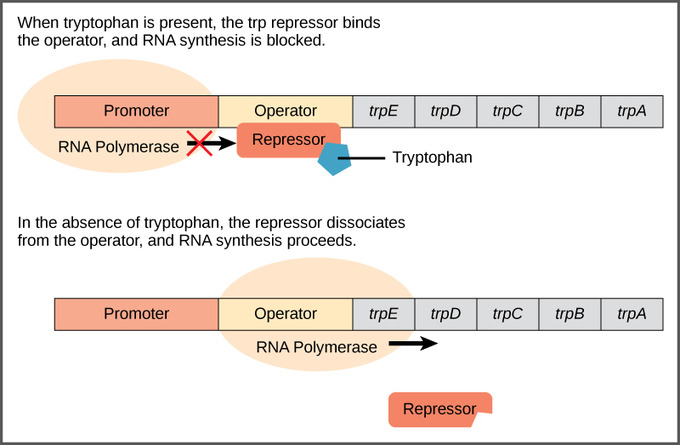 A DNA sequence called the operator sequence is encoded between the promoter region and the first trp-coding gene. This operator contains the DNA code to which the repressor protein can bind. When tryptophan is present in the cell, two tryptophan molecules bind to the trp repressor, which changes shape to bind to the trp operator. Binding of the tryptophan–repressor complex at the operator physically prevents the RNA polymerase from binding and transcribing the downstream genes.

The stringent response is a stress response that occurs in bacteria in reaction to amino-acid starvation or other stress conditions.

The stringent response, also called stringent control, is a stress response that occurs in bacteria and plant chloroplasts in reaction to amino-acid starvation, fatty acid limitation, iron limitation, heat shock, and other stress conditions. The stringent response is signaled by the alarmone (p)ppGpp and modulating transcription of up to 1/3 of all genes in the cell. This in turn causes the cell to divert resources away from growth and division and toward amino acid synthesis in order to promote survival until nutrient conditions improve.

An amino acid: The generic structure of an alpha amino acid in its un-ionized form.

In other bacteria, stringent response is mediated by a variety of RelA/SpoT Homologue (RSH) proteins, with some having only synthetic, hydrolytic, or both (Rel) activities. The disable of stringent response by distruption of relA and spoT in Pseudomonas aeruginosa, produces infectious cells and biofilms that have nutrient limitations. They are more susceptible to antibiotics.

During the stringent response, (p)ppGpp accumulation affects the resource-consuming cell processes replication, transcription, and translation. (p)ppGpp is thought to bind RNA polymerase and alter the transcriptional profile, decreasing the synthesis of translational machinery (such as rRNA and tRNA), and increasing the transcription of biosynthetic genes. Additionally, the initiation of new rounds of replication is inhibited and the cell cycle arrests until nutrient conditions improve. Translational GTP involved in protein biosynthesis are also affected by ppGpp, with Initiation Factor 2 (IF2) being the main target.

Repression of anabolic pathways is regulated by altering transcription rates.

Differentiate between inducible and repressible systems in gene regulation

Regulatory protein is a term used in genetics to describe a protein involved in regulating gene expression. Such proteins are usually bound to a DNA binding site which is sometimes located near the promoter although this is not always the case. Sites of DNA sequences where regulatory proteins bind are called enhancer sequences. Regulatory proteins are often needed to be bound to a regulatory binding site to switch a gene on (activator) or to shut off a gene (repressor). Generally, as the organism grows more sophisticated, its cellular protein regulation becomes more complicated and, indeed, some human genes can be controlled by many activators and repressors working together.

In prokaryotes, regulation of transcription is needed for the cell to quickly adapt to the ever-changing outer environment. The presence or the quantity and type of nutrients determines which genes are expressed; in order to do that, genes must be regulated in some fashion. In prokaryotes, repressors bind to regions called operators that are generally located downstream from and near the promoter (normally part of the transcript). Activators bind to the upstream portion of the promoter, such as the CAP region (completely upstream from the transcript). A combination of activators, repressors and rarely enhancers (in prokaryotes) determines whether a gene is transcribed.

For example, when E. coli bacteria are subjected to heat stress, the σ32 subunit of its RNA polymerase changes in such a way that the enzyme binds to a specialized set of promoters that precede genes for heat-shock response proteins.

Another example is when a cell contains a surplus amount of the amino acid tryptophan, the acid binds to a specialized repressor protein (tryptophan repressor). The binding changes the structural conformity of the repressor such that it binds to the operator region for the operon that synthesizes tryptophan, preventing their expression and thus suspending production. This is a form of negative feedback. 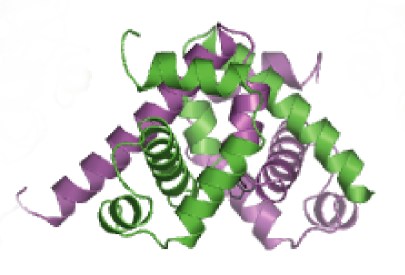 Trp Repressor Protein: Here is a diagram of the Trp repressor protein.

In bacteria, the lac repressor protein blocks the synthesis of enzymes that digest lactose when there is no lactose to feed on. When lactose is present, it binds to the repressor, causing it to detach from the DNA strand. 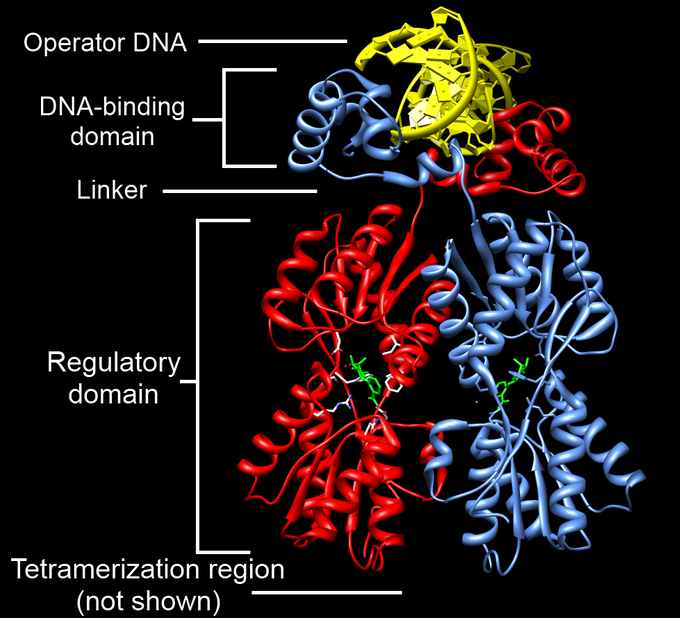 Annotated Crystal Structure of Dimeric LacI: Annotated crystal structure of dimeric LacI. Two monomers (of four total) cooperate to bind each DNA operator sequence. Monomers (red and blue) contain DNA binding and core domains (labeled) which are connected by a linker (labeled). The C-terminal tetramerization helix is not shown. The repressor is shown in complex with operator DNA (gold) and ONPF (green), an anti-inducer ligand (i.e. a stabilizer of DNA binding).

The L-arabinose operon, also called ara operon, is a gene sequence encoding enzymes needed for the catabolism of arabinose to xylulose 5-phosphate, an intermediate of the pentose phosphate pathway. It has both positive and negative regulation. The operon is found in Escherichia coli (E. coli).

It has been a focus for research in molecular biology since 1970, and has been investigated extensively at its genetic, biochemical, physiological, and biophysical levels.

The structural gene, which encodes arabinose breakdown enzymes, is araBAD. The regulator gene is araC. The genes, araBAD and araC, are transcribed in opposite directions.

AraI lies between the structural genes and the operator. The araI1 and araI2 are DNA -binding sites that, when occupied by AraC, induce expression.

The ara operon is regulated by the AraC protein. If arabinose is absent, the dimer AraC protein represses the structural gene by binding to araI1 and araO2 and the DNA forms a loop, which prevents RNA polymerase from binding to the promoter of the ara operon, thereby blocking transcription.

Also for activation, the binding of another structure to araI is needed: CRP (formerly known as CAP) + cyclic AMP. Thus the activation depends on the presence of arabinose and cAMP.