Helminthic Diseases of the Digestive System

Tapeworms are helminths capable of targeting the digestive system, but require various hosts for successful growth and transmission.

Tapeworms are characterized as adult parasitic flatworms that target and infect the digestive tract. Typically, transmission occurs by ingestion of a live tapeworm larva which is found in undercooked or contaminated food. Once inside the digestive tract, the larvae can then grow and develop into a large tapeworm. There are various types of tapeworms identified to date that are capable of infecting humans. A few common tapeworms include the pork tapeworm (Taenia solium), the beef tapeworm (Taenia saginata), and the fish tapeworm (Diphyllobothrium spp. ).

Taenia solium, the pork tapeworm, infects both pigs and humans. Humans are typically infected by ingesting infected pork. Taenia solium will target the intestinal area in humans. Using the four suckers and two rows of hooks present on its scolex, it lodges itself against the intestinal wall. Once anchored, the tapeworm continues to grow in the intestine and will pass its eggs through the feces. When Taenia solium is in its larval stage, it is referred to as a cysticercus and can cause cysticercosis. Cysticercosis occurs when the cysticerci reach the central nervous system and cause neurological issues. 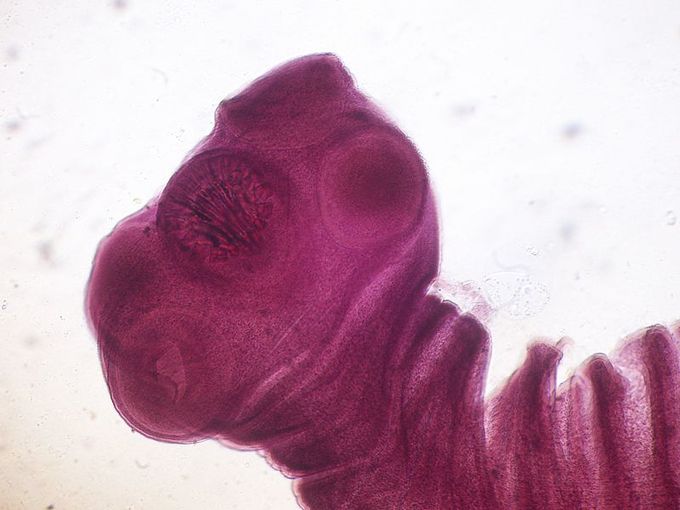 Taenia saginata, the beef tapeworm, is capable of infecting both cattle and humans. Infection by Taenia saginata is referred to as taeniasis in humans and occurs by ingestion of contaminated meat that has been improperly handled. Taeniasis is caused by the ability of the tapeworm to lodge itself in the small intestine of the human and release fertilized eggs through the feces. The eggs can then infect cattle upon ingestion. Upon infection of the cattle, the fertilized eggs will develop into zygotes which will exit the digestive tract and enter into the circulatory system. The larval stages will then form cysts, referred to as Cysticercus bovis, within the muscular system of the cattle. Therefore, if humans ingest under prepared meat with cysts, the cysts will break open into the digestive system and develop into an adult tapeworm in the human host. 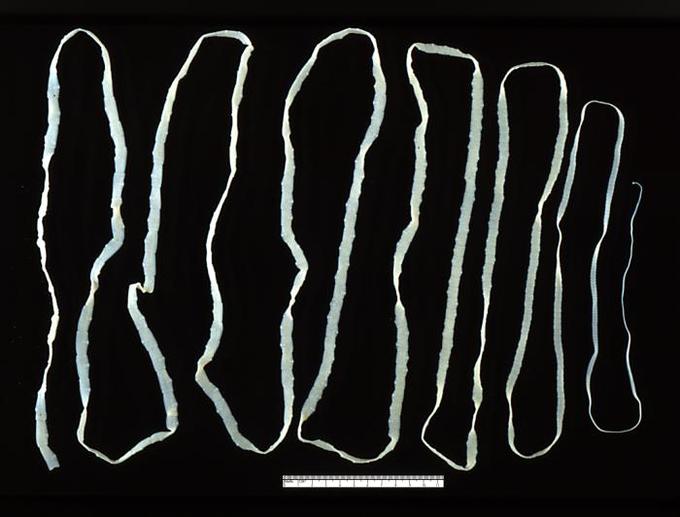 Diphyllobothrium spp, the fish tapeworm, encompasses various species that can infect humans upon ingestion of under cooked or raw fish. For example, these tapeworms include those found on broad fish and salmon. Interestingly, only a few species of these tapeworms are found to infect humans on a frequent basis. The tapeworms found in fish exhibit the ability to also infect canines, felines, bears, and mussels.

Hydatid disease, also referred to as cystic echinococcosis, is characterized by the slow growth of large cysts within various organs.

Hydatid disease, commonly referred to as echinococcosis, is a result of infection by the tapeworm included in the Echinococcus spp.

Echinococcus granulosus is a tapeworm found in dogs, who function as the definitive host, as well as sheep, cattle, goats, and pigs who serve as intermediate hosts. Echinococcus granulosus are capable of infecting humans, resulting in hydatid disease, and cause slowly enlarging cysts that develop in vital organs such as the liver or lungs, also referred to as cystic echinococcosis. However, the growth of these cysts are slow and may go unnoticed for a significant duration of time. This form of echinococcosis is more prevalent and commonly found in humans. The adult Echinococcus granulosus targets the small bowel of the definitive hosts and release eggs through the feces. After ingestion by the intermediate hosts, the eggs will hatch and penetrate the intestinal wall. The exiting of the intestinal wall results in circulation of oncospheres that will target various organs, including the liver and lungs. The oncospheres undergo further growth and form cysts. The definitive host will then become infected upon ingestion of the cyst-containing organs of the infected intermediate host. It is within the definitive host that the cyst will develop into the adult stage and the cycle continues and repeats.

Hydatid disease is characterized by the growth of these cysts into the adult stage for the tapeworm. Individuals infected with Echinococcus species that develop hydatid disease may not develop symptoms for many years after infection. However, if symptoms develop, it may present in the form of pain or discomfort due to the growing cysts in the upper abdominal regions. Additionally, rupture of fluid within the cysts can result in various medical issues including allergic reactions or death.

Nematodes, or roundworms, are capable of exhibiting parasitic behavior.

Compare and contrast mechanisms of infection for the parasitic nematodes: Ascaris lumbricoides and Enterobius

Nematodes, or roundworms, are the most diverse phylum of pseudocoelomates and one of the most diverse animal phyla. Nematodes are characterized by the presence of a tubular digestive system with openings at both ends. They can be found in various ecosystems ranging from the polar regions to the tropics, fresh to marine water and various terrestrial environments ranging from mountains, deserts and oceanic floors. Nematodes are also capable of exhibiting parasitic behavior that contribute to digestive system diseases. Analysis of parasitic nematodes reveals the presence of specific body structures which promote parasitic behaviors such as ridges, rings or bristles that allow for attachment. Parasitic nematodes that commonly infect humans include ascarids (Ascaris), pinworms (Enterobius), whipworms (Trichuris trichiura), filarias and hookworms. The following is a brief overview of two of these types of roundworms, including Ascaris and Enterobious.

Ascariasis is a disease that is caused by the parasitic roundworm Ascaris lumbricoides. Ascariasis is commonly found in tropical and sub-tropical regions and is transmitted by ingesting food contaminated with Ascaris eggs that are typically present in the feces of an infected individual. Upon ingestion of Ascaris eggs, the larvae continue development and hatch within the intestine of the host. The larvae burrow through the intestinal wall and begin circulation in the system and migrate to the lungs. Once they have migrated to the lungs, the larvae break into the alveoli and continue to move through the trachea and esophagus where they are eventually coughed up and swallowed. For a second time, the larvae enter into the intestine and mature into adult worms. Individuals affected with ascariasis can be asymptomatic or suffer from visceral damage due to the travel of the larvae through the body. The presence of the worms within the intestine may also result in malabsorption or intestinal blockage.

Ascariasis Life Cycle: An overview and summary of the life cycle leading to Ascariasis.

Enterobius, referred to as pinworm, is a type of parasitic nematode that is commonly found in the intestine of children. This infection is often called enterobiasis. The entire life cycle of the pinworm occurs within the human gastrointestinal tract. The life cycle begins with ingestion or insertion of eggs in the anus that have been transmitted via human-to-human contact. The life cycle of the Enterobious ends with eggs laid in the anus and transfered to surfaces that come in contact with this region, such as fingernails, hands, night-clothing and bed linens. Infection by pinworm is more prevalent in children due to their behaviors. Upon infection with eggs, they travel to the small intestine and hatch. The pinworm larvae will then migrate towards the colon and undergo molting which allows for further development. After two molt cycles, the larvae have developed into adults. The pinworms exhibit the ability to mate in the small intestine. Shortly after mating, the male worms die and are passed out via the feces. However, the female pinworms will attach to the mucus and wait for the egg-laying process to begin. The egg-laying process begins with the migration of the females towards the rectum. The eggs, which are covered with a sticky covering, are then released and deposited on the outside or near the anus. The cycle begins again once eggs are ingested and infect an additional host.