Clonal selection and tolerance select for survival of lymphocytes that will protect the host from foreign antigens.

Central tolerance is the mechanism by which newly developing T cells and B cells are rendered non-reactive to self. The concept of central tolerance was proposed in 1959 as part of a general theory of immunity and tolerance. It was hypothesized that it is the age of the lymphocyte that defines whether an antigen that is encountered will induce tolerance, with immature lymphocytes being tolerance sensitive. The theory that self-tolerance is ‘learned’ during lymphocyte development was a major conceptual contribution to immunology. It was experimentally substantiated in the late 1980’s when tools to analyze lymphocyte development became available. Central tolerance is distinct from periphery tolerance in that it occurs while cells are still present in the primary lymphoid organs (thymus and bone-marrow), prior to export into the periphery. Peripheral tolerance is generated after the cells reach the periphery. Regulatory T cells can be considered both central tolerance and peripheral tolerance mechanisms, as they can be generated from self (or foreign)-reactive T cells in the thymus during T cell differentiation. However, they exert their immune suppression in the periphery on other self (or foreign)-reactive T cells.

Cytokines and chemokines are both small proteins secreted by cells of the immune system.

Summarize the role of cytokines and chemokines

These are small cell-signaling protein molecules that are secreted by numerous cells, and are a category of signaling molecules used extensively in intercellular communication.

Cytokines can be classified as proteins, peptides, or glycoproteins. The term “cytokine” encompasses a large and diverse family of regulators produced throughout the body by cells of diverse embryological origin. The term has also been used to refer to the immunomodulating agents, such as interleukins and interferons.

Biochemists disagree as to which molecules should be termed cytokines and which hormones. As we learn more about each, anatomic and structural distinctions between the two are fading. Classic protein hormones circulate in nanomolar (10-9) concentrations that usually vary by less than one order of magnitude. In contrast, some cytokines (such as IL-6) circulate in picomolar (10-12) concentrations that can increase up to 1,000-fold during trauma or infection.

The widespread distribution of cellular sources for cytokines may be a feature that differentiates them from hormones. Virtually all nucleated cells, but especially endo/epithelial cells and resident macrophages (many near the interface with the external environment), are potent producers of IL-1, IL-6, and TNF-alpha. In contrast, classic hormones, such as insulin, are secreted from discrete glands (e.g., the pancreas).

As of 2008, the current terminology refers to cytokines as immunomodulating agents.

These are a family of small cytokines, or proteins secreted by cells. Their name is derived from their ability to induce directed chemotaxis in nearby responsive cells; they are chemotactic cytokines.

Proteins are classified as chemokines according to shared structural characteristics, such as small size (they are all approximately 8-10 kilodaltons in size), and the presence of four cysteine residues in conserved locations that are key to forming their 3-dimensional shape. However, these proteins have historically been known under several other names including the SIS family of cytokines, SIG family of cytokines, SCY family of cytokines, Platelet factor-4 superfamily or intercrines.

Some chemokines are considered pro-inflammatory and can be induced during an immune response to recruit cells of the immune system to a site of infection, while others are considered homeostatic and are involved in controlling the migration of cells during normal processes of tissue maintenance or development.

Chemokines are found in all vertebrates, some viruses and some bacteria, but none have been described for other invertebrates. These proteins exert their biological effects by interacting with G protein-linked transmembrane receptors called chemokine receptors, that are selectively found on the surfaces of their target cells.

Superantigens are a class of antigens that cause activation of T-cells and massive cytokine release.

Describe the mechanism of action for superantigens and the effects

Superantigens (SAgs) are proteins that cause the T-cells of the immune system to over-react to infection. They are produced by certain infectious bacteria and viruses. The immune system over-reaction to the antigen causes a group of diseases that manifest in fever and shock, such as food poisoning, toxic shock syndrome, and Kawasaki disease. Common bacterial species that may use a superantigen as part of their virulence strategy are staphylococci and streptococci. 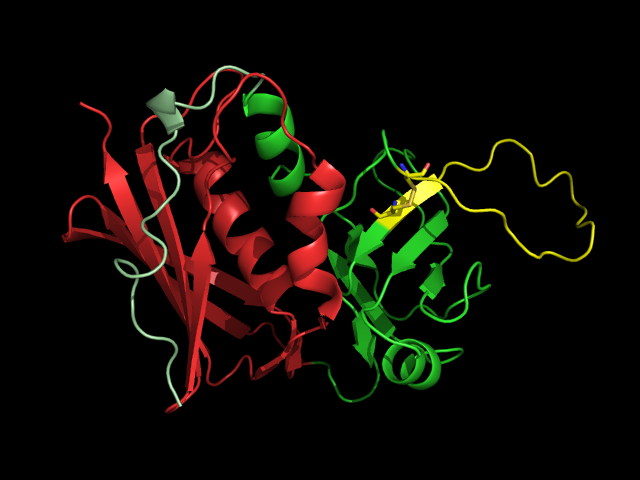 These bacteria usually live harmlessly on the body, but can cause infections in certain circumstances. The superantigens of each species are, like antigens, molecules the immune system recognizes as being foreign. Superantigens cause symptoms of illness by tricking the T-cells of the immune system into over-reacting to these molecules. Parts of a bacterium or a virus are usually recognized by the macrophage cells of the immune system. The macrophage ingests the foreign invaders and breaks them down. Then the macrophage takes parts of the broken-down invader or other molecules that it ingested and posts the fragments on the outside of the cell using a major histocompatibility complex (MHC) to hold the fragment.

The large number of activated T-cells generates a massive immune response which is not specific to any particular epitope on the SAg. This undermines one of the fundamental strengths of the adaptive immune system, that is, its ability to target antigens with high specificity. More importantly, the large number of activated T-cells secretes large amounts of cytokines, the most important of which is Interferon gamma. This excess amount of IFN-gamma is in turn what activates the macrophages.

The complement system helps antibodies and phagocytic cells clear pathogens from an organism.

Describe the function of the complement system

The serum complement system, which represents a chief component of innate immunity, not only participates in inflammation but also acts to enhance the adaptive immune response. Specific activation of the complement via innate recognition proteins or secreted antibody releases cleavage products that interact with a wide range of cell surface receptors found on myeloid, lymphoid, and stromal cells. This intricate interaction among complement activation products and cell surface receptors provides a basis for the regulation of both B and T cell responses.

Activation of the Complement System

The complement system can be activated through three major pathways: classical, lectin, and alternative. Initiation of the classical pathway occurs when C1q, in complex with C1r and C1s serine proteases (the C1 complex), binds to the Fc region of complement-fixing antibodies (generally IgG1and IgM) attached to pathogenic surfaces. Autocatalytic activation of C1r and C1s in turn cleaves C4 and C2 into larger (C4b, C2a) and smaller (C4a, C2b) fragments. The larger fragments associate to form C4bC2a on pathogenic surfaces, and the complex gains the ability to cleave C3 and is termed the C3 convertase.

Generation of the C3 convertase, which cleaves C3 into the anaphylatoxin C3a and the opsonin C3b, is the point at which all complement activation cascades converge. When C3 is cleaved into C3b, it exposes an internal thioester bond that allows stable covalent binding of C3b to hydroxyl groups on proximate carbohydrates and proteins. This activity underpins the entire complement system by effectively “tagging” microorganisms as foreign, leading to further complement activation on and around the opsonized surface and terminating in the production of anaphylatoxins and assembly of membrane attack complexes. 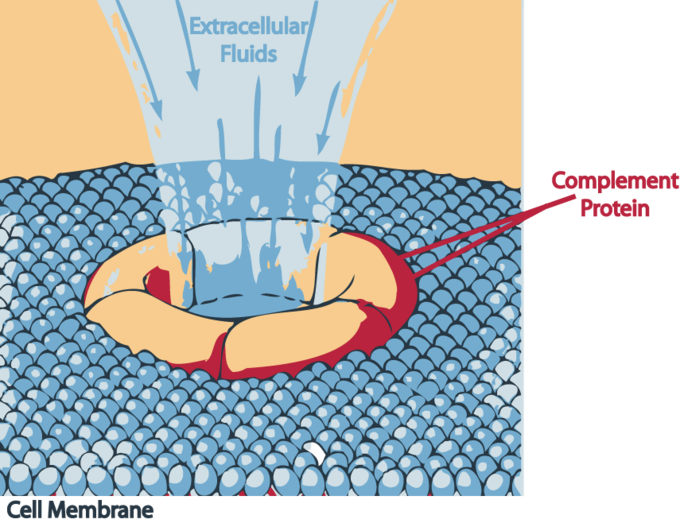 Functions of the Complement System

Further study in animals bearing natural complement deficiencies implicated the classical pathway as a crucial mechanism for efficient antigen trapping and retention in lymphoid tissues (e.g., splenic follicles), suggesting that a major function of the complement system was to localize foreign antigens into immune sites important for lymphocytes responses.