Primary immunodeficiencies are disorders in which part of the body’s immune system is missing, or does not function properly.

The precise symptoms of a primary immunodeficiency depend on the type of defect. Generally, the symptoms and signs that lead to the diagnosis of an immunodeficiency include recurrent or persistent infections, or developmental delay as a result of infection. Particular organ problems; such as diseases involving the skin, heart, facial development and skeletal system; may be present in certain conditions. Others predispose to autoimmune disease, where the immune system attacks the body’s own tissues, or tumors (sometimes specific forms of cancer, such as lymphoma). The nature of the infections, as well as the additional features, may provide clues as to the exact nature of the immune defect.

The basic tests performed when an immunodeficiency is suspected should include a full blood count ( including accurate lymphocyte and granulocyte counts) and immunoglobulin levels. Tthe three most important types of antibodies are IgG, IgA and IgM.

Other tests are performed depending on the suspected disorder:

Due to the rarity of many primary immunodeficiencies, many of the above tests are highly specialized and tend to be performed in research laboratories.

In primary antibody deficiencies, one or more isotypes of immunoglobulin are decreased or don’t function properly. These proteins, generated by plasma cells, normally bind to pathogens, targeting them for destruction.

A number of syndromes, including the following, escape formal classification but are otherwise recognisable by particular clinical or immunological features:

In certain conditions, including the following, the regulation rather than the intrinsic activity of parts of the immune system is the predominant problem:

Phagocytes are the cells that engulf and ingest pathogens (phagocytosis), and destroy them with chemicals. Monocytes/macrophages as well as granulocytes are capable of this process. In certain conditions, either the number of phagocytes is reduced or their functional capacity is impaired. Several rare conditions are due to defects in the innate immune system, which is a basic line of defense independent of the more advanced lymphocyte-related systems. Many of these conditions are associated with skin problems.

Rather than predisposing for infections, most of the autoinflammatory disorders lead to excessive inflammation. Many manifest themselves as periodic fever syndromes. They may involve various organs directly, as well as predisposing for long-term damage by leading to amyloid deposition.

The complement system is part of the innate as well as the adaptive immune system; it is a group of circulating proteins that can bind pathogens and form a membrane attack complex. Complement deficiencies are the result of a lack of any of these proteins. They may predispose to infections but also to autoimmune conditions.

The treatment of primary immunodeficiencies depends foremost on the nature of the abnormality. This may range from immunoglobulin replacement therapy in antibody deficiencies—in the form of intravenous immunoglobulin (IVIG) or subcutaneous immunoglobulin (SCIG)—to hematopoietic stem cell transplantation for SCID and other severe immunodeficiences. SCID can now be treated with a bone marrow transplant. Reduction of exposure to pathogens may be recommended, and in many situations prophylactic antibiotics may be advised. 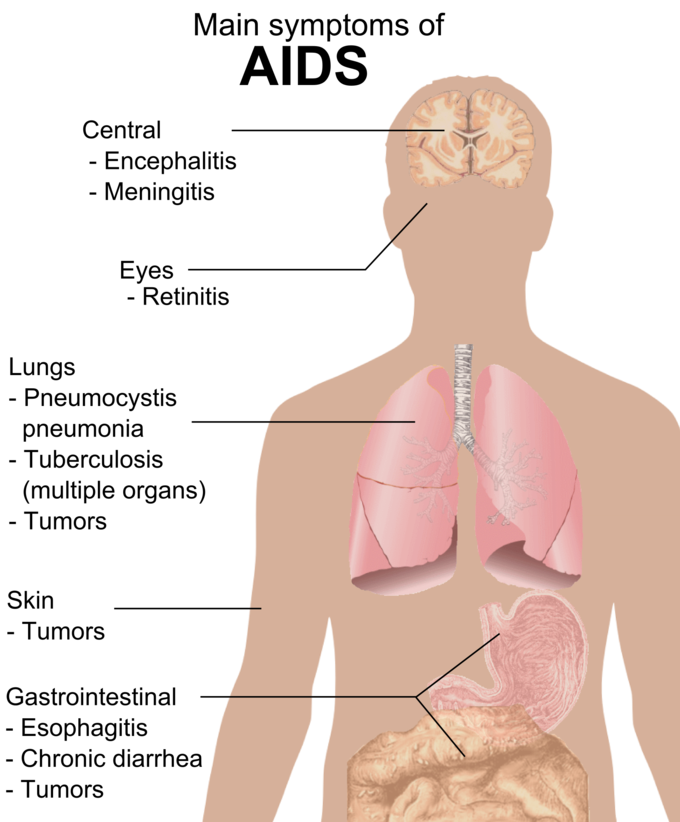 Main Symptoms of AIDS: Acquired immunodeficiency syndrome (AIDS) is defined in terms of either a CD4+ T cell count below 200 cells per µL or the occurrence of specific diseases in association with an HIV infection. In the absence of specific treatment, around half the people infected with HIV develop AIDS within 10 years. The most common initial conditions that alert to the presence of AIDS are pneumocystis pneumonia and cachexia.

A number of rare diseases feature a heightened susceptibility to infections from childhood onward. Primary Immunodeficiency is also known as “congenital immunodeficiencies. ” Many of these disorders are hereditary and are autosomal recessive or X-linked. There are over 80 recognized primary immunodeficiency syndromes; they are generally grouped by the part of the immune system that is malfunctioning, such as lymphocytes or granulocytes. The treatment of primary immunodeficiencies depends on the nature of the defect and may involve antibody infusions, long-term antibiotics, and (in some cases) stem cell transplantation.

Secondary immunodeficiencies, also known as acquired immunodeficiencies, can result from various immunosuppressive agents, for example, malnutrition, aging and particular medications (e.g., chemotherapy, disease-modifying antirheumatic drugs, immunosuppressive drugs after organ transplants, glucocorticoids). For medications, the term immunosuppression generally refers to both beneficial and potential adverse effects of decreasing the function of the immune system, while the term immunodeficiency generally refers solely to the adverse effect of increased risk for infection. Many specific diseases directly or indirectly cause immunosuppression. This includes many types of cancer, particularly those of the bone marrow and blood cells (leukemia, lymphoma, multiple myeloma), and certain chronic infections. Immunodeficiency is also the hallmark of acquired immunodeficiency syndrome (AIDS), caused by the human immunodeficiency virus (HIV). HIV directly infects a small number of T helper cells and also impairs other immune system responses indirectly.

Cancer immunotherapy is the use of the body’s own immune system to reject cancer.

Describe the use of immunotherapy in cancer treatment

Cancer immunotherapy is the use of the body’s own immune system to reject cancer. The main idea is stimulating the patient’s immune system to attack the malignant tumor cells that are responsible for the disease. This can be either through immunization of the patient (e.g., by administering a cancer vaccine such as Dendreon’s Provenge), in which case the patient’s own immune system is trained to recognize tumor cells as targets to be destroyed, or through the administration of therapeutic antibodies as drugs, in which case the patient’s immune system is recruited to destroy tumor cells by the therapeutic antibodies. Cell-based immunotherapy is another major entity of cancer immunotherapy. This involves immune cells such as the natural killer cells (NK cells), lymphokine-activated killer cells (LAK cells), cytotoxic T lymphocytes (CTLs), and dendritic cells (DC). These immune cells are either activated in vivo by administering certain cytokines such as interleukins, or they are isolated, enriched, and transfused back into the patient to fight against cancer.

Since the immune system responds to the environmental factors it encounters on the basis of discrimination between self and non-self, many kinds of tumor cells that arise as a result of the onset of cancer are more or less tolerated by the patient’s own immune system since the tumor cells are essentially the patient’s own cells that are growing, dividing, and spreading without proper regulatory control. In spite of this fact, however, many kinds of tumor cells display unusual antigens that are inappropriate for either the cell type or its environment or that are only normally present during the organism ‘s development (e.g. fetal antigens). Examples of such antigens include the glycosphingolipid GD2, a disialoganglioside that is normally only expressed at a significant level on the outer surface membranes of neuronal cells, where its exposure to the immune system is limited by the blood-brain barrier.

Structure of GD2: GD2 is a disialoganglioside expressed on tumors of neuroectodermal origin, including human neuroblastomas and melanomas, with highly restricted expression on normal tissues, principally to the cerebellum and peripheral nerves in humans. The relatively tumor-specific expression of GD2 makes it a suitable target for immunotherapy with monoclonal antibodies or with artificial T-cell receptors.

GD2 is expressed on the surfaces of a wide range of tumor cells, including neuroblastomas, medulloblastomas, astrocytomas, melanomas, small-cell lung cancer, osteosarcomas, and other soft tissue sarcomas. GD2 is thus a convenient tumor-specific target for immunotherapies.

Adoptive cell-based immunotherapy involves isolating either allogenic or autologous immune cells, enriching them outside the body, and transfusing them back to the patient. The injected immune cells are highly cytotoxic to the cancer cells and so help to fight them.

Antibodies are a key component of the adaptive immune response. They play a central role in both the recognition of foreign antigens and the stimulation of an immune response to them. It is not surprising, therefore, that many immunotherapeutic approaches involve the use of antibodies. The advent of monoclonal antibody technology has made it possible to raise antibodies against specific antigens, such as the unusual antigens that are presented on the surfaces of tumors. A number of therapeutic monoclonal antibodies have been approved for use in humans, such as alemtuzumab, an anti-CD52 humanized IgG1 monoclonal antibody indicated for the treatment of chronic lymphocytic leukemia (CLL). Radioimmunotherapy in turn involves the use of radioactively conjugated murine antibodies against cellular antigens, mostly for treatment of lymphomas.

The development and testing of second-generation immunotherapies is already under way. While antibodies targeted to disease-causing antigens can be effective under certain circumstances, in many cases their efficacy may be limited by other factors. In the case of cancer tumors, the microenvironment is immunosuppressive, allowing even those tumors that present unusual antigens to survive and flourish in spite of the immune response generated by the cancer patient against his own tumor tissue. Certain members of a group of molecules known as cytokines, such as interleukin-2, also play a key role in modulating the immune response. Cytokines have been tested in conjunction with antibodies in order to generate an even more devastating immune response against the tumor. While the therapeutic administration of such cytokines may cause systemic inflammation, resulting in serious side effects and toxicity, there is a new generation of chimeric molecules consisting of an immune-stimulatory cytokine attached to an antibody that targets a tumor. These chimeric molecules are able to generate a very effective yet localized immune response against the tumor tissue, destroying the cancer-causing cells without the unwanted side effects.