In microbiology, minimum inhibitory concentration (MIC) is the lowest concentration of an antimicrobial (like an antifungal, antibiotic or bacteriostatic) drug that will inhibit the visible growth of a microorganism after overnight incubation. MICs can be determined on plates of solid growth medium (called agar, shown in the “Kirby-Bauer Disk Susceptibility Test” atom) or broth dilution methods (in liquid growth media, shown in ) after a pure culture is isolated. For example, to identify the MIC via broth dilution, identical doses of bacteria are cultured in wells of liquid media containing progressively lower concentrations of the drug. The minimum inhibitory concentration of the antibiotic is between the concentrations of the last well in which no bacteria grew and the next lower dose, which allowed bacterial growth. There are also several commercial methods available to experimentally measure MIC values. 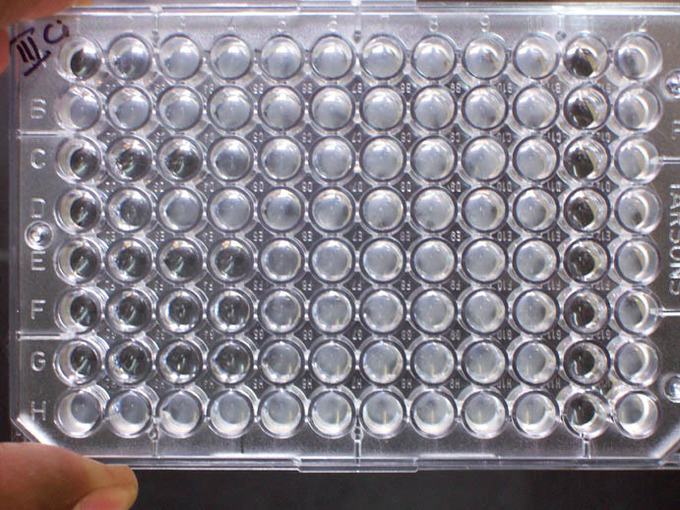 Microbroth Dilution Method: To identify the lowest concentration required for a given antibiotic to inhibit bacterial growth, an identical amount of bacteria is introduced into wells of liquid media containing progressively lower concentrations of the drug. (Here, the dilution series of the drug is set up from left to right: for example, well E1 might contain 100 units of drug; E2, 50 units; E3, 25 units; E4, 12.5 units; etc.). Because bacterial growth made the media in well E5 cloudy and the media in well E4 is indistinguishable from clear media, this indicates that the minimum inhibitory concentration is between the drug concentrations in wells E4 and E5. (Image courtesy of Microrao, Dept. of Microbiology, JJMMC, Davangere).

An MIC is generally regarded as the most basic laboratory measurement of the activity of an antimicrobial agent against an organism. Because a lower MIC value indicates that less of the drug is required in order to inhibit growth of the organism, drugs with lower MIC scores are more effective antimicrobial agents. Currently, there are a few web-based, freely accessible MIC databases. MIC scores are important in diagnostic laboratories to confirm resistance of microorganisms to an antimicrobial agent and also to monitor the activity of new antimicrobial agents. Clinicians use MIC scores to choose which antibiotics to administer to patients with specific infections and to identify an effective dose of antibiotic. This is important because populations of bacteria exposed to an insufficient concentration of a particular drug or to a broad-spectrum antibiotic (one designed to inhibit many strains of bacteria) can evolve resistance to these drugs. Therefore, MIC scores aid in improving outcomes for patients and preventing evolution of drug-resistant microbial strains.

Review the procedure for the Kirby-Bauer antibiotic test 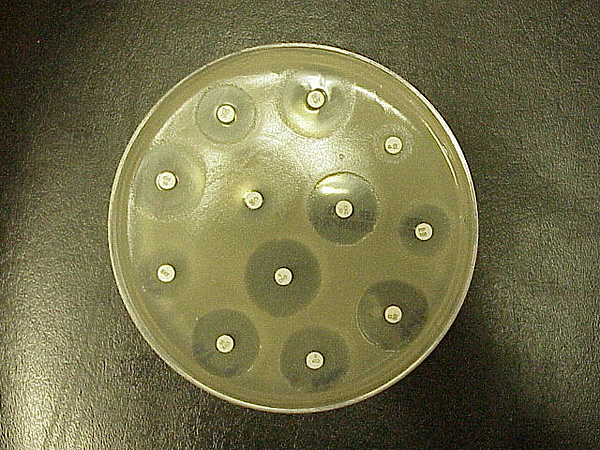 Clinicians can use KB test results to choose appropriate antibiotics to combat a particular infection in a patient. Administering antibiotics that specifically target the particular bacteria that are causing the infection can avoid using broad-spectrum antibiotics, which target many types of bacteria. Thus, clinical application of KB testing results can decrease the frequency with which antibiotic-resistant bacteria evolve.