Microbial ore leaching is the process in which microorganisms are used to extract metals from ores.

Microbial ore leaching (bioleaching) is the process of extracting metals from ores with the use of microorganisms. This method is used to recover many different precious metals like copper, lead, zinc, gold, silver, and nickel. Microorganisms are used because they can:

Bacteria perform the key reaction of regenerating the major ore oxidizer which in most cases is ferric iron as well as further ore oxidation. The reaction is performed at the bacterial cell membrane. In the process, free electrons are generated and used for the reduction of oxygen to water which produces energy in the bacterial cell.

Ores, like pyrite (FeS2), are first oxidized by ferric iron (Fe3+) to thiosulfate (S2O32-) in the absence of bacteria.

In the first step, disulfide is spontaneously oxidized to thiosulfate by ferric iron (Fe3+), which in turn is reduced to give ferrous iron (Fe2+):

Bacteria are added in the second step and recover Fe3+ from ferrous iron (Fe2+) which is then reused in the first step of leaching: 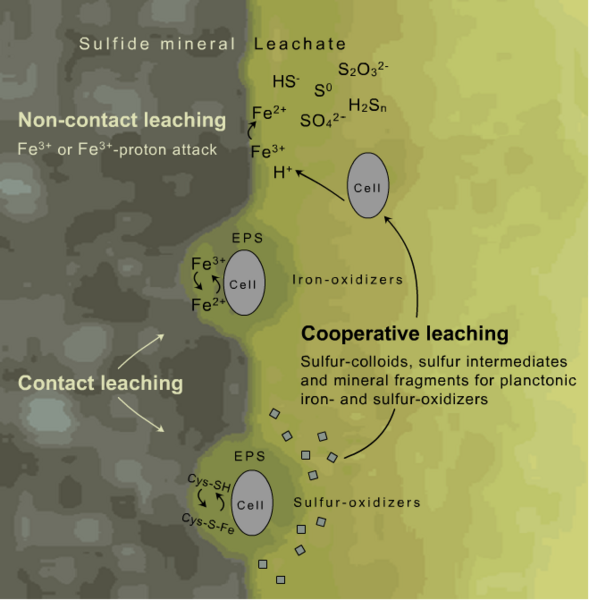 Thiosulfate is also oxidized by bacteria to give sulfate:

The ferric iron produced in reaction (2) oxidized more sulfide as in reaction (1), closing the cycle and given the net reaction:

The net products of the reaction are soluble ferrous sulfate and sulfuric acid.

The microbial oxidation process occurs at the cell membrane of the bacteria. The electrons pass into the cells and are used in biochemical processes to produce energy for the bacteria while reducing oxygen to water. The critical reaction is the oxidation of sulfide by ferric iron. The main role of the bacterial step is the regeneration of this reactant.

Bioleaching reactions industrially are performed by many bacterial species that can oxidize ferrous iron and sulfur. An example of such species is Acidithiobacillus ferroxidans. Some fungi species (Aspergillus niger and Penicillium simplicissimum) have also been shown to have the ability to dissolute heavy metals. When fungi are used, the leaching mechanism is different. The fungi use the acids that they produce in their metabolic reactions to dissolve the metal.

In general, bioleaching is cleaner and safer for the environment than chemical processing. However environmental pollution with toxic products, like sulfuric acid from the pyrite leaching, and heavy metals is still possible. Another drawback of microbial leaching is the slow rate at which microbes work.

Petroleum oil can be degraded by microorganisms that use it as a source of energy.

Biodegradation is the process in which living organisms, most often microorganisms, break down material into simpler components. Such material is usually organic matter that could be dissolved into chemical elements by organisms that possess the metabolic pathways to perform the reactions. Some microorganisms produce enzymes that can degrade a variety of chemical compounds, including hydrocarbons like oil.

Petroleum (crude oil) is a liquid fossil fuel. It is a product of decaying organic matter, such as algae and zooplankton. It is one of the major energy sources in the world, and is also used by the chemical industry to manufacture a large number of consumer products. However, oil drilling or transportation can cause accidents that lead to contamination of the environment. Oil spills in marine environments are especially damaging because they cannot be contained and can spread over huge areas. The aromatic compounds in oil are toxic to living organisms and such spills can render havoc in an ecosystem. Natural seepages from unexplored oil sources is another source of contamination.

The Deepwater Horizon Oil Spill: This spill was the largest in the history of the oil industry and spread over huge areas.

In the environment, such spills are naturally cleaned by microorganisms that can break down the oil. The dominant group of such bacteria are the hydrocarbonoclastic bacteria (HCB). The concentration of these bacteria increases significantly in areas of oil spill. One of the best studied representative of this group is Alcanivorax borkumensis; it’s also the only one to have its genome sequenced. This species contains individual genes responsible for breaking down certain alkanes into harmless products. It also possesses genes to direct the production of a layer of biosurfactant around the cell to enhance the oil emulsification. The addition of nitrogen and phosphorus to the Alcanivorax environment increases its growth rate. However, the addition of these nutrients in natural environments to improve the cleanup of oil spills is not desirable, since it can have an overall negative impact on the ecosystem.

Aside from hydrocarbons, crude oil contains additional toxic compounds, such as pyridine. These are degraded by representatives of other genera such as Micrococcus and Rhodococcus. Oil tarballs are biodegraded slowly by species from the genera Chromobacterium, Micrococcus, Bacillus, Pseudomonas, Candida, Saccharomyces and others. In the clean up of the Deepwater Horizon oil spill, genetically modified microorganisms were used, but some scientists suspect they might have caused health issues for people in the affected areas.

The Degradation of Synthetic Chemicals in Soils and Water

Microorganisms are crucial participants in the detoxification of water and soil.

Distinguish bioremediation of soil vs. water

Our planet is contaminated with many chemicals that are toxic to living organisms. These chemicals are products or byproducts from different industries. Examples of such contaminants are polychlorinated biphenyls (PCBs), polyaromatic hydrocarbons (PAHs), chloroethenes, and pharmaceutical substances. These pollutants can cause dangerous contamination of the air, soil, and water. Microorganisms play a major role in eliminating such pollutants from the environment.

Soil is a major reservoir of microorganisms with each gram containing about one billion microbes. Microbes are used for bioremediation in situ of contaminated soil. Microorganisms that can remove contaminants from the environment are called bioremediators. Contaminations are most often caused by a mixture of pollutants and the best strategy for cleanup is to use a cocktail of different species since each one of them will be optimized for the degradation of a specific toxic compound.

The microbe activity is usually monitored on such sites to ensure optimal conditions for bacterial growth and hence degradation. Decomposition of the toxic substances can be performed both in the presence (aerobically) and absence (anaerobically) of oxygen. The limiting factor for bioremediaton in soils is the bioavailability of the contaminant agents.

The treatment of sewage water is a critical process to assure the purification of wastewater that will prevent chemical and microbiological pollution of the environment, especially for the drinking water supplies. An important part of this process is the biological step which involves the activity of living organisms to clean the water from organic matter. This happens in the secondary step of sewage purification. Microorganisms substantially lessen the concentration of nutrients which if released in the environment can lead to undesirable overgrowth of microorganisms and algae. 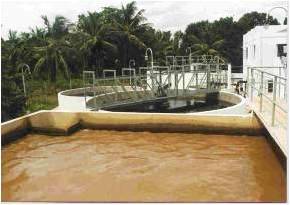 Sewage Treatment Plant: Wastewater treatment plants are critical in lowering the levels of pollutants in the environment.

They also have the potential to clean the water from toxic components. The degradation is performed in the anaerobic, aerobic, and composting steps. Anaerobic digestion by bacteria is allowed to procede for almost two weeks to guarantee enough time to complete the process. During this time, the organic matter undergoes four different enzymatic transformations: hydrolysis, acidogenesis, acetogenesis and methanogenesis. The final products are water, carbon dioxide, and methane. In the aerobic step, oxygen is added into the system and the organic matter is converted to carbon dioxide. In the composting step, additional carbon sources are added to aid the final steps of degradation.

In recent years, advances in genomics, proteomics, and bioinformatics studies of environmental microorganisms have revealed a tremendous potential in metabolic pathways.

Such studies showed that Burkholderia xenovorans LB400 and Rhodococcus sp. strain RHA1, have evolved pathways to degrade aromatic compounds, which are some of the toughest contaminants to eliminate. The bacteria have genes coding for deoxygenases to open the aromatic ring structures of these chemicals.

Hydrocarbons and their derivatives were long believed to be degraded only in the presence of oxygen. This would often lead to oxygen depletion in environments heavily polluted with oil. Studies in recent years have proven that there are numerous anaerobic bacterial species capable of decomposing this group of pollutants. A common feature among these bacteria is that they possess reductive dehalogenases.

Bacterial species are assisted in the process of degradation by fungi (e.g., Aspergillus sp.), protozoa, and representatives of Archaea. The primary role of fungi is in secreting numerous extracellular enzymes that break down complex molecules into their components and make them readily available to the bacterial community.