Microbial Diseases of the Respiratory System

Functional Anatomy of the Respiratory System

The respiratory system include lungs, airways and respiratory muscles. Ventilation is the rate at which gas enters or leaves the lung.

Summarize the the functional anatomy of the respiratory system

The primary function of the respiratory system is gas exchange between the external environment and an organism ‘s circulatory system. In humans and other mammals, this exchange balances oxygenation of the blood with the removal of carbon dioxide and other metabolic wastes from the circulation.

As gas exchange occurs, the acid-base balance of the body is maintained as part of homeostasis. If proper ventilation is not maintained, two opposing conditions could occur: respiratory acidosis (a life threatening condition) and respiratory alkalosis.

At the molecular level, gas exchange occurs in the alveoli—tiny sacs which are the basic functional component of the lungs. The alveolar epithelial tissue is extremely thin and permeable, allowing for gas exchange between the air inside the lungs and the capillaries of the blood stream. Air moves according to pressure differences, in which air flows from areas of high pressure to areas of low pressure. 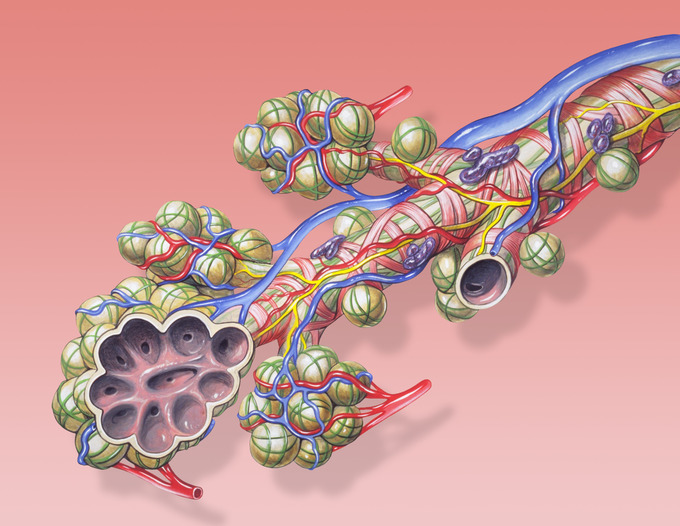 Bronchial anatomy: The pulmonary alveoli are the terminal ends of the respiratory tree, outcropping from either alveolar sacs or alveolar ducts, which are both sites of gas exchange with the blood.

In respiratory physiology, ventilation rate is the rate at which gas enters or leaves the lung. There are several different terms used to describe the nuances of the ventilation rate.

Dead space is any space that isn’t involved in alveolar gas exchange itself, and it typically refers to parts of the lungs that are conducting zones for air, such as the trachea and bronchioles.

If someone breathes through a snorkeling mask, the length of their conducting zones increases, which increases dead space and reduces on alveolar ventilation. Feedback mechanisms increase the ventilation rate in such a case, but if dead space becomes too great, they won’t be able to counteract the effect.

The ventilation rate is controlled by several centers of the autonomic nervous system in the brain, primarily the medulla and the pons.

Inhalation is initiated by the activity of the diaphragm and supported by the external intercostal muscles. A normal human respiratory rate is 10 to 18 breaths per minute.

During vigorous inhalation (at rates exceeding 35 breaths per minute), or in approaching respiratory failure, accessory muscles—such as the sternocleidomastoid, platysma, and the scalene muscles of the neck—are recruited to help sustain the increased respiratory rate. Pectoral muscles and latissimus dorsi are also accessory muscles for the activity of the lungs.

Under normal conditions, the diaphragm is the primary driver of inhalation. When the diaphragm contracts, the rib cage expands and the contents of the abdomen are moved downward, resulting in a larger thoracic volume and negative pressure (with respect to atmospheric pressure) inside the thorax.

As air moves from zones of high pressure to zones of low pressure, the contraction of the diaphragm allows the air to enter the conducting zone (such as the trachea, bronchioles, etc.), where it is filtered, warmed, and humidified as it flows to the lungs.

Exhalation is generally a passive process. The lungs have high degree of elastic recoil, so they rebound from the stretch of inhalation and air flows out until the pressures in the lungs and the atmosphere reach equilibrium.

Forced exhalation is often used as an indicator to measure airway health, as people with obstructive lung diseases (such as emphysema, asthma, and bronchitis) will not be able to actively exhale as much as a healthy person because of obstruction in the conducting zones from inhlation, or from a loss of elastic recoil of the lungs.

Airborne diseases are characterized by diseases that are transmitted through the air via the presence of a pathogen.

Give examples of airborne pathogens and various routes of transmission

Airborne diseases are characterized by diseases that are transmitted through the air via the presence of a pathogen. These pathogens can include both viruses and bacteria that are spread by coughing, sneezing, laughing, or through personal contact. The pathogens are capable of traveling distances on air currents when they are present on either dust particles or small respiratory droplets. The airborne transmission that occurs utilizes small particles or droplet nucleithat contains these infectious agents or pathogens. These particles and droplets are capable of remaining suspended in air for extended periods of time. Inhalation of these particles results in respiratory tract infection. The ability of these droplets to remain suspended for long periods of time result in the lack of face-to-face contact for infection. The ability of these pathogens to survive and retain their ability to infect for relatively long periods of time add to the difficulty encountered in their prevention and targeting.

Often times, these airborne pathogens can result in inflammation in the nose, throat, sinuses, and the lungs. The symptoms such as sinus congestion, coughing, and sore throats are examples of inflammation of the upper respiratory airway. Many types of infections that can be a result of airborne transmission include: Anthrax, Chickenpox, Influenza, Measles, Smallpox, and Tuberculosis. Airborne diseases are caused by exposure to a source such as an infected individual or animal.

Airborne transmission of disease is common in unsanitary household conditions and overcrowded areas, and pathogens that are transmitted in this manner thrive in areas of poverty and poor hygienic conditions. For example, tuberculosis is common in individuals from developing areas in the world, adding to 95% of cases worldwide.