Despite an apparent simplicity, bacteria can form complex associations with other organisms.

Contrast the ecological associations among microorganisms

Despite an apparent simplicity, bacteria can form complex associations with other organisms. This process is known as symbiosis. These symbiotic associations can be divided into parasitism, mutualism and commensalism. Due to their small size, commensal bacteria are ubiquitous and grow on animals and plants exactly as they would grow on any other surface. However, their growth can be increased by warmth and sweat; in humans, large populations of these organisms are the cause of body odor. 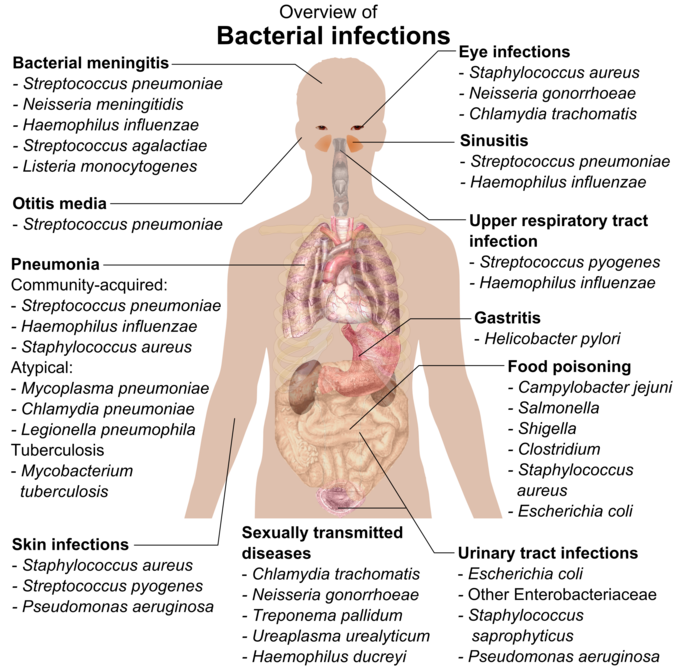 Bacterial Infections in the Human Host: Overview of the main bacterial infections and the most notable species involved

Some species of bacteria kill and then consume other microorganisms; these species are called predatory bacteria. These include organisms such as Myxococcus xanthus, which forms swarms of cells that kill and digest any bacteria they encounter. Other bacterial predators either attach to their prey in order to digest them and absorb nutrients, such as Vampirococcus, or invade another cell and multiply inside the cytosol, such as Daptobacter. These predatory bacteria are thought to have evolved from saprophages that consumed dead microorganisms through adaptations that allowed them to entrap and kill other organisms.

Certain bacteria form close spatial associations that are essential for their survival. One such mutualistic association, called interspecies hydrogen transfer, occurs between clusters of anaerobic bacteria that consume organic acids, such as butyric acid or propionic acid, and produce hydrogen; and methanogenic Archaea, which consume hydrogen. The bacteria in this association are unable to consume the organic acids since this reaction produces hydrogen, which accumulates in the bacteria’s surroundings. Only the intimate association with the hydrogen-consuming Archaea keeps the hydrogen concentration low enough to allow the bacteria to grow.

In soil, microorganisms that reside in the rhizospehere (a zone that includes the root surface and the soil that adheres to the root after gentle shaking) carry out nitrogen fixation, converting nitrogen gas to nitrogenous compound. This serves to provide an easily absorbable form of nitrogen for many plants that cannot fix nitrogen themselves. Many other bacteria are found as symbionts in humans and other organisms. For example, the presence of over one thousand bacterial species in the normal human gut flora of the intestines can contribute to gut immunity. Synthesis vitamins such as folic acid, vitamin K, and biotin convert sugars to lactic acid (see Lactobacillus), as well as fermenting complex undigestible carbohydrates. The presence of this gut flora also inhibits the growth of potentially pathogenic bacteria (usually through competitive exclusion), and these beneficial bacteria are consequently sold as probioticdietary supplements.

If bacteria form a parasitic association with other organisms, they are classed as pathogens. Pathogenic bacteria are a major cause of human death and disease and cause infections such as tetanus, typhoid fever, diphtheria, syphilis, cholera, foodborne illness, leprosy, and tuberculosis. A pathogenic cause for a known medical disease may only be discovered many years after, as was the case with Helicobacter pylori and peptic ulcer disease. Bacterial diseases are also important in agriculture, with bacteria causing leaf spot, fire blight, and wilts in plants; as well as Johne’s disease, mastitis, salmonella, and anthrax in farm animals.

Each species of pathogen has a characteristic spectrum of interactions with its human hosts. Some organisms, such as Staphylococcus or Streptococcus, can cause skin infections, pneumonia, meningitis and even overwhelming sepsis, a systemic inflammatory response producing shock, massive vasodilation, and death. Yet these organisms are also part of the normal human flora and usually exist on the skin or in the nose without causing any disease at all. Other organisms invariably cause disease in humans, such as the Rickettsia, which are obligate intracellular parasites able to grow and reproduce only within the cells of other organisms. One species of Rickettsia causes typhus, while another causes Rocky Mountain spotted fever. Chlamydia, another phylum of obligate intracellular parasites, contains species that can cause pneumonia, or urinary tract infection and may be involved in coronary heart disease. Finally, some species such as Pseudomonas aeruginosa, Burkholderia cenocepacia, and Mycobacterium avium are opportunistic pathogens and cause disease mainly in people suffering from immunosuppression or cystic fibrosis.

A biofilm is an aggregate of microorganisms in which cells adhere to each other on a surface.

A biofilm is an aggregate of microorganisms in which cells adhere to each other on a surface. These cells are frequently embedded within a self-produced matrix of extracellular polymeric substance (EPS). Biofilm EPS, also referred to as slime, is a polymeric conglomeration composed of extracellular DNA, proteins, and polysaccharides. Biofilms may form on living or non-living surfaces and can be prevalent in natural, industrial, and hospital settings.

The microbial cells growing in a biofilm are physiologically distinct from planktonic cells of the same organism, which, by contrast, are single cells that may float or swim in liquid. Microbes form a biofilm in response to many factors, including cellular recognition of specific or non-specific attachment sites on a surface, nutritional cues, or exposure of planktonic cells to sub-inhibitory concentrations of antibiotics. When a cell switches to the biofilm mode of growth, it undergoes a phenotypic shift in behavior in which large suites of genes are differentially regulated.

Formation of a biofilm begins with the attachment of free-floating microorganisms to a surface. These first colonists initially form a weak, reversible adhesion to the surface via van der Waals forces. If the colonists are not immediately separated from the surface, they can anchor themselves more permanently using cell adhesion structures such as pili. Some species are not able to attach to a surface on their own but are able to anchor themselves to the matrix or directly to earlier colonists. It is during this colonization that the cells are able to communicate via quorum sensing using such products as AHL. Once colonization has begun, the biofilm grows through a combination of cell division and recruitment. The final stage of biofilm formation is known as development; this is the stage in which the biofilm is established and may change only in shape and size. The development of a biofilm may allow for an aggregate cell colony (or colonies) to be antibiotic-resistant.

In sum, the five stages of biofilm development are as follows: 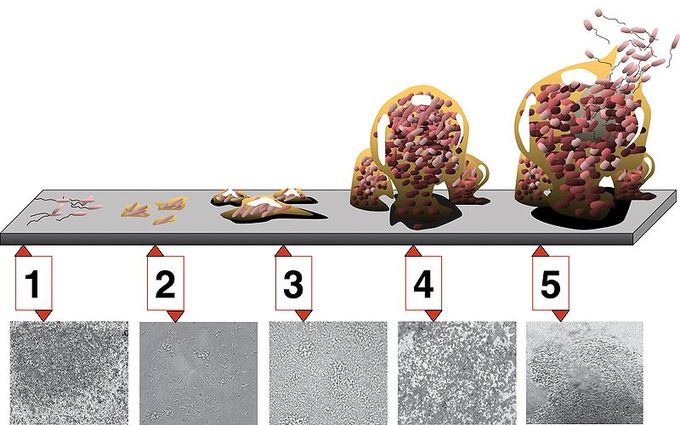 Dispersal of cells from the biofilm colony is an essential stage of the biofilm life cycle. Dispersal enables biofilms to spread and colonize new surfaces. Enzymes that degrade the biofilm extracellular matrix, such as dispersin B and deoxyribonuclease, may play a role in biofilm dispersal. Biofilm matrix-degrading enzymes may be useful as anti-biofilm agents. Recent evidence has shown that one fatty acid messenger, cis-2-decenoic acid, is capable of inducing dispersion and inhibiting growth of biofilm colonies. Secreted by Pseudomonas aeruginosa, this compound induces cyclo heteromorphic cells in several species of bacteria and the yeast Candida albicans. Nitric oxide has also been shown to trigger the dispersal of biofilms of several bacteria species at sub-toxic concentrations, so it shows potential for use in the treatment of patients that suffer from chronic infections caused by biofilms.

Bacteria living in a biofilm usually have significantly different properties from free-floating bacteria of the same species, as the dense and protected environment of the film allows them to cooperate and interact in various ways. One benefit of this environment is increased resistance to detergents and antibiotics, as the dense extracellular matrix and the outer layer of cells protect the interior of the community. In some cases antibiotic resistance can be increased a thousandfold. Lateral gene transfer is also greatly facilitated in biofilms and leads to a more stable structure.