Microbial cytoplasm is contained within the cytoplasmic membrane and includes the cytosol, macromolecules, and inclusions.

Describe the ultrastructure of the microbial cytoplasm

The bacterial cytoplasmic membrane plays a role in permeability and energy conservation in microbial cell structure. The cytoplasmic membranes in bacteria are composed of a phospholipid bilayer; this layer differs from those found in eukaryotes in their lack of sterols. The membranes however, may contain compounds called hopanoids and various fatty acids as well.

The fatty acids present within the cytoplasmic membrane are categorized into classes based on the addition of functional groups; methyl or hydroxyl groups are two examples of such groups. The cytoplasm itself is enclosed within the membrane. In bacteria it lacks the structures seen in eukaryotic cells, including a mitochondria, nucleus, or chloroplasts. The components of the microbial cytoplasm include macromolecules, smaller molecules, various inorganic ions, and cytoplasmic inclusions. The macromolecules included in a bacterial cytoplasm include proteins, DNA, RNA molecules. Smaller molecules include precursors to macromolecules and vitamins. Below is an overview of the components found in microbial cytoplasm based on chemical analysis.

Typical Prokaryotic Cell: Structure of a typical prokaryotic cell. Note the location of the cytoplasm and its components.

The cytosol is a major component of the cytoplasm; it is the liquid portion of the cytoplasm that is not enclosed within a membrane-bound component. The cytosol is typically composed of water, salts, and organic molecules. Elements found within the cytosol include carbon, hydrogen, nitrogen, oxygen, phosphorous, and sulfur. These elements are critical to metabolic processes used by microbes.

Macromolecules found within bacterial cytoplasm include the nucleoid region, ribosomes, proteins, and enzymes. The nucleoid region is the area within the cell that houses the genetic material. Prokaryotes may sometimes contain an extra chromosomal piece of DNA referred to as the plasmid. The ribosomes, similar to ribosomes in eukaryotes, are responsible for protein synthesis. Unlike eukaryotes, prokaryotes, specifically bacteria, typically contain one cytosol-specific ribosome. Eukaryotes have multiple types of ribosomes, including the mitochondria and cytosol).

Another group of substances found within the cytoplasm include small particles referred to as inclusions. These inclusions are characterized by their granular appearance and insolubility. They are suspended in the cytosol.

Inclusions vary, based on cell types. Typically, inclusions function as reserve materials. In prokaryotes, for example, lipid droplets are plentiful in cells which require lipid storage mechanisms. These lipid droplets store molecules such as fatty acids which are present in the cytoplasmic membrane of prokaryotes. E. coli offers another example of bacterial inclusions. These E. coli inclusions are composed of protein aggregates. In addition, inclusions can contain phosphate reserves, sulfur reserves, or photosynthetic pigments.

Sources of Essential Nutrients for Microorganisms

Nutrients are materials that are acquired from the environment and are used for growth and metabolism. Microorganisms (or microbes) vary significantly in terms of the source, chemical form, and amount of essential elements they need. Some examples of these essential nutrients are carbon, oxygen, hydrogen, phosphorus, and sulfur.

The sources of common essential nutrients are carbon, hydrogen, nitrogen, oxygen, phosphorus, and sulfur. Organisms usually absorb carbon when it is in its organic form. Carbon in its organic form is usually a product of living things. Another essential nutrient, nitrogen, is part of the structure of protein, DNA, RNA, and ATP. Nitrogen is important for heterotroph survival, but it must first be degraded into basic building blocks, such as amino acids, in order to be used. Oxygen is an important component of both organic and inorganic compounds. It is essential to the metabolism of many organisms. Hydrogen has many important jobs including maintaining the pH of solutions and providing free energy in reactions of respiration. Phosphate is an important player in making nucleic acids and cellular energy transfers. Without sufficient phosphate, an organism will cease to grow. Lastly, sulfur is found in rocks and sediments and is found widely in mineral form.

Nutrients are necessary for microbial growth and play a vital role in culturing microorganisms outside of their natural environment.

The Role of Nutrients

Nutrients are necessary for microbial growth and play a vital role in the proper cultivation of microorganisms in the laboratory and for proper growth in their natural environments. The types of nutrients that are required include those that supply energy, carbon and additional necessary materials. The nutrients used to propagate growth are organism -specific, based on their cellular and metabolic processes.. 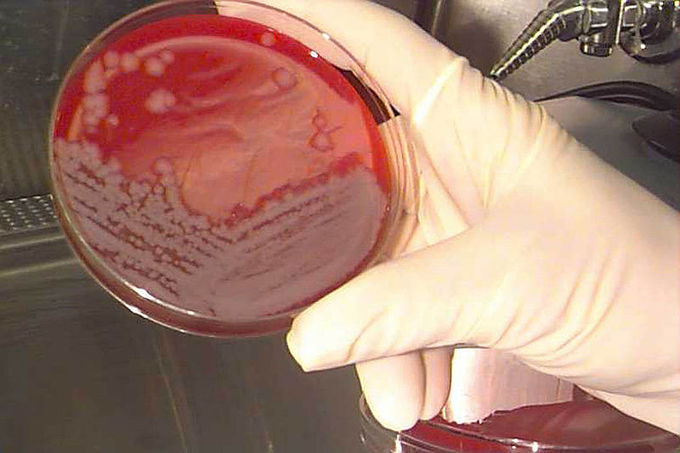 Anthrax Culture: An image of an anthrax culture grown on a petri dish. In order for microogranisms to be cultured in the laboratory or undergo successful growth in their natural environment, the proper nutrients are absolutely necessary.

In regard to required nutrients for proper growth, there are often limiting factors involved. The limiting factor or limiting nutrient affects and controls growth. The availability of specific nutrients dictates organismal growth by controlling and limiting activation of cellular and metabolic pathways necessary for progress. When all nutrients and parameters are ideal and constant during the growth phase, this is regarded as a steady state: all requirements are present and microorganisms thrive. In circumstances where there are less than ideal parameters, such as a lack of specific requirements, the growth process is affected.

In industrial microbiology this concept is critical, as microbial growth and production is dictated by proper cellular growth and metabolism. The production of necessary components if often controlled by the presence and concentration of a limiting nutrient. Hence, it is critical to identify the required nutrients and ensure these are supplied in the culturing of microorganisms.