Microbial Products in the Health Industry

Industrially produced antibiotics are produced by fermentation, where the source microorganism is grown in large liquid growth medium.

Describe how antibiotics are produced in industry by fermentation

Antibiotics are produced industrially by a process of fermentation, where the source microorganism is grown in large containers (100,000 – 150,000 liters or more) containing a liquid growth medium.

Oxygen concentration, temperature, pH, and nutrient levels must be optimal and are closely monitored and adjusted if necessary. As antibiotics are secondary metabolites, the population size must be controlled very carefully to ensure that maximum yield is obtained before the cells die. Once the process is complete, the antibiotic must be extracted and purified to a crystalline product. This is simpler to achieve if the antibiotic is soluble in organic solvent. Otherwise it must first be removed by ion exchange, adsorption, or chemical precipitation.

Microorganisms used in fermentation are rarely identical to their counterparts in the wild. This is because species are often genetically modified to yield the maximum amounts of antibiotics. Mutation is often used and is encouraged by introducing mutagens such as ultraviolet radiation, x-rays, or certain chemicals. Selection and further reproduction of the higher yielding strains over many generations can raise yields by 20-fold or more. Another technique used to increase yields is gene amplification, where copies of genes coding for enzymes involved in the antibiotic production can be inserted back into a cell, via vectors such as plasmids. This process must be closely linked with retesting of antibiotic production and effectiveness. 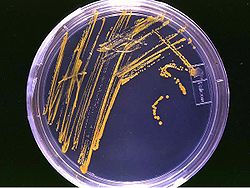 Despite the wide variety of known antibiotics, less than 1% of antimicrobial agents have medical or commercial value. For example, whereas penicillin has a high therapeutic index as it does not generally affect human cells, this is not the case for many antibiotics. Other antibiotics simply lack advantage over those already in use or have no other practical applications.

Useful antibiotics are often discovered using a screening process. To conduct such a screen, isolates of many different microorganisms are cultured and then tested for production of diffusible products that inhibit the growth of test organisms. Most antibiotics identified in such a screen are already known and must therefore be disregarded. The remainder must be tested for their selective toxicities and therapeutic activities, and the best candidates can be examined and possibly modified.

A more modern version of this approach is a rational design program. This involves screening directed towards finding new natural products that inhibit a specific target, such as an enzyme only found in the target pathogen, rather than tests to show general inhibition of a culture.

Microorganisms and plants can synthesize many uncommon amino acids and vitamins.

Amino acids are biologically important organic compounds made from amine (-NH2) and carboxylic acid (-COOH) functional groups, along with a side-chain specific to each amino acid. The key elements of an amino acid are carbon, hydrogen, oxygen, and nitrogen. About 500 amino acids are known which can be classified in many ways.

Microorganisms and plants can synthesize many uncommon amino acids. For example, some microbes make 2-aminoisobutyric acid and lanthionine, which is a sulfide-bridged derivative of alanine. Both of these amino acids are found in peptidic lantibiotics such as alamethicin. While in plants, 1-aminocyclopropane-1-carboxylic acid is a small disubstituted cyclic amino acid that is a key intermediate in the production of the plant hormone ethylene.

Vitamin K is a group of structurally similar, fat-soluble vitamins that are needed for the posttranslational modification of certain proteins required for blood coagulation and in metabolic pathways in bone and other tissue. They are 2-methyl-1,4-naphthoquinone (3-) derivatives. This group of vitamins includes two natural vitamers: vitamin K1 and vitamin K2.

Vitamin K1, also known as phylloquinone or phytomenadione (also called phytonadione), is synthesized by plants, and is found in highest amounts in green leafy vegetables because it is directly involved in photosynthesis.

Vitamin K2 has several subtypes, one of which is involved in bone metabolism. Vitamin K2 homologs (menaquinones) are characterized by the number of isoprenoid residues in their side chain. Menaquinones are abbreviated MK-n, where n represents the number of isoprenoid side chain residues. For example, menaquinone-4 (abbreviated MK-4), has four isoprene residues in its side chain. Bacteria in the colon (large intestine) can produce a range of vitamin K2 forms, and can also convert K1 into K2 (MK-7 homolog). No known toxicity exists for vitamins K1 or K2.

Three synthetic types of vitamin K are known: vitamins K3, K4, and K5. Although the natural K1 and K2 forms are nontoxic, the synthetic form K3 (menadione) has shown toxicity.

A steroid is a type of organic compound that contains a characteristic arrangement of four cycloalkane rings that are joined to each other.

A steroid is a type of organic compound that contains a characteristic arrangement of four cycloalkane rings that are joined to each other. Examples of steroids include the dietary fat cholesterol, the sex hormones estradiol and testosterone, and the anti-inflammatory drug dexamethasone. The core of steroids is composed of twenty carbon atoms bonded together that take the form of four fused rings: three cyclohexane rings (designated as rings A, B, and C in the figure to the right) and one cyclopentane ring (the D ring). The steroids vary by the functional groups attached to this four-ring core and by the oxidation state of the rings. Sterols are special forms of steroids, with a hydroxyl group at position-3 and a skeleton derived from cholestane. 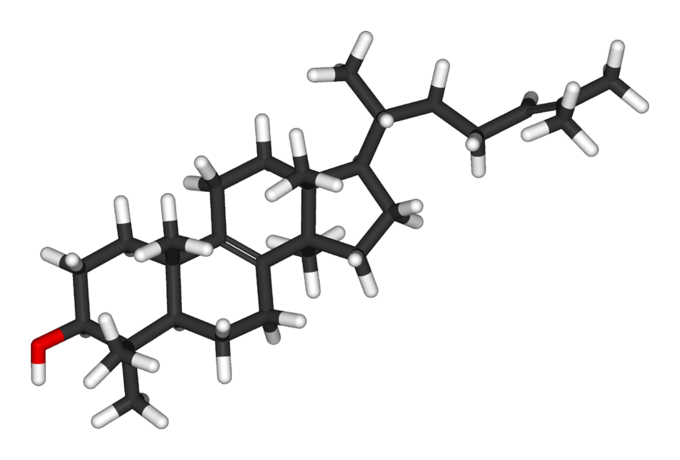 Steroid Lanosterol: This is the stick model of the steroid lanosterol. The total number of carbons (30) reflects its triterpenoid origin.

Steroid biosynthesis is an anabolic metabolic pathway that produces steroids from simple precursors. A unique biosynthetic pathway is followed in animals compared to many other organisms, making the pathway a common target for antibiotics and other anti-infective drugs. In humans and other animals, the biosynthesis of steroids follows the mevalonate pathway that uses acetyl-CoA as building blocks to form dimethylallyl pyrophosphate (DMAPP) and isopentenyl pyrophosphate (IPP). In plants and bacteria, the non-mevalonate pathway uses pyruvate and glyceraldehyde 3-phosphate as substrates.

The non-mevalonate pathway or 2-C-methyl-D-erythritol 4-phosphate/1-deoxy-D-xylulose 5-phosphate pathway (MEP/DOXP pathway) of isoprenoid biosynthesis is an alternative metabolic pathway leading to the formation of isopentenyl pyrophosphate (IPP) and dimethylallyl pyrophosphate (DMAPP).

The classical mevalonate pathway or HMG-CoA reductase pathway is an important cellular metabolic pathway present in all higher eukaryotes and many bacteria. It is important for the production of IPP and DMAPP that serve as the basis for the biosynthesis of molecules used in processes as diverse as protein prenylation, cell membrane maintenance, hormones, protein anchoring, and N-glycosylation.

Enzymes are biological molecules that catalyze (increase the rates of) chemical reactions.

Describe the use of enzymes in industry

Enzymes are biological molecules that catalyze (increase the rates of) chemical reactions. In enzymatic reactions, the molecules at the beginning of the process, called substrates, are converted into different molecules, called products. Almost all chemical reactions in a biological cell need enzymes in order to occur at rates sufficient for life. Since enzymes are selective for their substrates and speed up only a few reactions from among many possibilities, the set of enzymes made in a cell determines which metabolic pathways occur in that cell.

Like all catalysts, enzymes work by lowering the activation energy for a reaction, thus dramatically increasing the rate of the reaction. As a result, products are formed faster and reactions reach their equilibrium state more rapidly. Most enzyme reaction rates are millions of times faster than those of comparable un-catalyzed reactions.

As with all catalysts, enzymes are not consumed by the reactions they catalyze, nor do they alter the equilibrium of these reactions. However, enzymes do differ from most other catalysts in that they are highly specific for their substrates. A few RNA molecules called ribozymes also catalyze reactions, with an important example being some parts of the ribosome. Synthetic molecules, called artificial enzymes, also display enzyme-like catalysis.

Enzyme activity can be affected by other molecules. Inhibitors can decrease enzyme activity; activators can increase activity. Many drugs and poisons are enzyme inhibitors. Activity is also affected by temperature, pressure, chemical environment (e.g., pH), and substrate concentration. Some enzymes are used commercially; for example, in the synthesis of antibiotics. In addition, some household products use enzymes to speed up biochemical reactions (e.g., enzymes in biological washing powders break down protein or fat stains on clothes; enzymes in meat tenderizers break down proteins into smaller molecules, making the meat easier to chew).

Enzymes are used in the chemical industry and other industrial applications when extremely specific catalysts are required. However, enzymes in general are limited in the number of reactions they have evolved to catalyze, and by their lack of stability in organic solvents and at high temperatures. As a consequence, protein engineering is an active area of research and involves attempts to create new enzymes with novel properties, either through rational design or in vitro evolution. These efforts have begun to be successful, and a few enzymes have now been designed “from scratch” to catalyze reactions that do not occur in nature.

In food processing, the enzymes used include amylases from fungi and plants. These enzymes are used in the production of sugars from starch, such as in making high-fructose corn syrup. In baking, they catalyze the breakdown of starch in the flour to sugar. Yeast fermentation of sugar produces the carbon dioxide that raises the dough. Proteases are used by biscuit manufacturers to lower the protein level of flour. Trypsin is used to predigest baby foods. For the processing of fruit juices, cellulases and pectinases are used to clarify fruit juices. Papain is used to tenderize meat for cooking.

In the dairy industry, rennin, derived from the stomachs of young ruminant animals (like calves and lambs) is used to manufacture of cheese, used to hydrolyze protein. Lipases are implemented during the production of Roquefort cheese to enhance the ripening of the blue-mold cheese. Lactases are used to break down lactose to glucose and galactose.

In the brewing industry, enzymes from barley are released during the mashing stage of beer production. They degrade starch and proteins to produce simple sugar, amino acids, and peptides that are used by yeast for fermentation. Industrially-produced barley enzymes are widely used in the brewing process to substitute for the natural enzymes found in barley. Amylase, glucanases, and proteases are used to split polysaccharides and proteins in the malt. Betaglucanases and arabinoxylanases are used to improve the wort and beer filtration characteristics. Amyloglucosidase and pullulanases are used for low-calorie beer and adjustment of fermentability. Proteases are used to remove cloudiness produced during storage of beers.

In the starch industry, amylases, amyloglucosideases, and glucoamylases convert starch into glucose and various syrups. Glucose isomerase converts glucose into fructose in production of high-fructose syrups from starchy materials.

In the paper industry, amylases, xylanases, cellulases, and ligninases are used to degrade starch to lower viscosity, aiding sizing and coating paper.

In the biofuel industry, cellulases used to break down cellulose into sugars that can be fermented (see cellulosic ethanol).

In the production of biological detergents, proteases, produced in an extracellular form from bacteria, are used in pre-soak conditions and direct liquid applications, helping with the removal of protein stains from clothes.