When glucose levels decline in E. coli, catabolite activator protein (CAP) is bound by cAMP to promote transcription of the lac operon.

Explain how an activator works to increase transcription of a gene

Just as the trp operon is negatively regulated by tryptophan molecules, there are proteins that bind to the operator sequences that act as a positive regulator to turn genes on and activate them. For example, when glucose is scarce, E. coli bacteria can turn to other sugar sources for fuel. To do this, new genes to process these alternate genes must be transcribed. This type of process can be seen in the lac operon which is turned on in the presence of lactose and absence of glucose.

When glucose levels drop, cyclic AMP (cAMP) begins to accumulate in the cell. The cAMP molecule is a signaling molecule that is involved in glucose and energy metabolism in E. coli. When glucose levels decline in the cell, accumulating cAMP binds to the positive regulator catabolite activator protein (CAP), a protein that binds to the promoters of operons that control the processing of alternative sugars, such as the lac operon. The CAP assists in production in the absence of glucose. CAP is a transcriptional activator that exists as a homodimer in solution, with each subunit comprising a ligand-binding domain at the N-terminus, which is also responsible for the dimerization of the protein and a DNA-binding domain at the C-terminus. Two cAMP molecules bind dimeric CAP with negative cooperativity and function as allosteric effectors by increasing the protein’s affinity for DNA. CAP has a characteristic helix-turn-helix structure that allows it to bind to successive major grooves on DNA. This opens up the DNA molecule, allowing RNA polymerase to bind and transcribe the genes involved in lactose catabolism. When cAMP binds to CAP, the complex binds to the promoter region of the genes that are needed to use the alternate sugar sources. In these operons, a CAP-binding site is located upstream of the RNA-polymerase-binding site in the promoter. This increases the binding ability of RNA polymerase to the promoter region and the transcription of the genes. As cAMP-CAP is required for transcription of the lac operon, this requirement reflects the greater simplicity with which glucose may be metabolized in comparison to lactose. 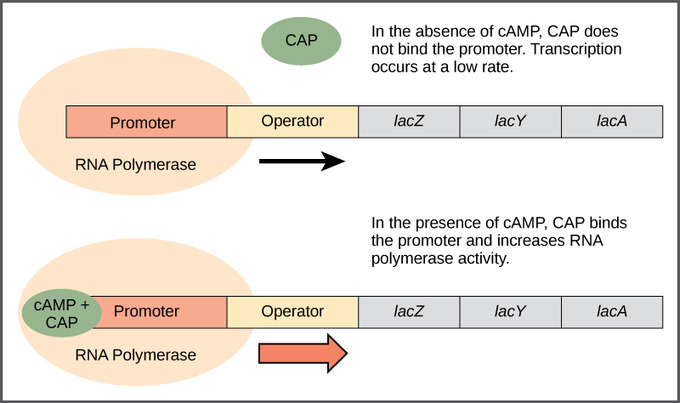 Catabolite Activator Protein (CAP) Regulation: When glucose levels fall, E. coli may use other sugars for fuel, but must transcribe new genes to do so. As glucose supplies become limited, cAMP levels increase. This cAMP binds to the CAP protein, a positive regulator that binds to an operator region upstream of the genes required to use other sugar sources.

The Initiation Complex and Translation Rate

The first step of translation is ribosome assembly, which requires initiation factors.

Discuss how eukaryotes assemble ribosomes on the mRNA to begin translation

Like transcription, translation is controlled by proteins that bind and initiate the process. In translation, before protein synthesis can begin, ribosome assembly has to be completed. This is a multi-step process.

In eukaryotes, several eukaryotic initiation factor proteins (eIFs) assist in ribosome assembly. The eukaryotic initiation factor-2 (eIF-2) is active when it binds to guanosine triphosphate (GTP). With GTP bound to it, eIF-2 protein binds to the small 40S ribosomal subunit. Next, the initiatior tRNA charged with methionine (Met-tRNAi) associates with the GTP-eIF-2/40S ribosome complex, and once all these components are bound to each other, they are collectively called the 43S complex.

Once the 43S complex is at the initiation AUG, the tRNAi-Met is positioned over the AUG. The anticodon on tRNAi-Met basepairs with the AUG codon. At this point, the GTP bound to eIF2 in the 43S complexx is hydrolyzed to GDP + phosphate, and energy is released. This energy is used to release the eIF2 (with GDP bound to it) from the 43S complex, leaving the 40S ribosomal subunit and the tRNAi-Met at the translation start site of the mRNA. 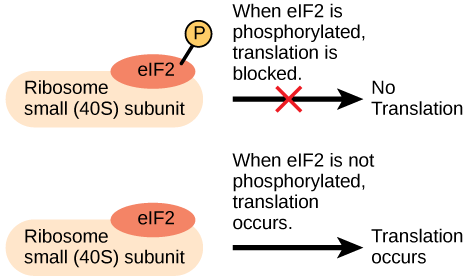 Translation Initiation Complex: Gene expression can be controlled by factors that bind the translation initiation complex.