The process of nitrogen fixation is carried out in microbes.

Describe the importance of nitrogen fixation

Nitrogen fixation also refers to other biological conversions of nitrogen, such as its conversion to nitrogen dioxide. Nitrogen fixation is a process by which nitrogen (N2) in the atmosphere is converted into ammonia (NH3). Atmospheric nitrogen or elemental nitrogen (N2) is relatively inert: it does not easily react with other chemicals to form new compounds. Dinitrogen is quite inert because of the strength of its N≡N triple bond. To break one nitrogen atom away from another requires breaking all three of these chemical bonds. Fixation processes free up the nitrogen atoms from their diatomic form (N2) to be used in other ways. Nitrogen fixation, natural and synthetic, is essential for all forms of life because nitrogen is required to biosynthesize basic building blocks of plants, animals, and other life forms, e.g., nucleotides for DNA and RNA and amino acids for proteins. Therefore, nitrogen fixation is essential for agriculture and the manufacture of fertilizer. Microorganisms that fix nitrogen are bacteria called diazotrophs.

The role of soil bacteria in the Nitrogen cycle: Nitrogen transitions between various biologically useful forms.

Some higher plants, and some animals (termites), have formed associations (symbioses) with diazotrophs. Diazotrophs are microbes. They are intensively studied by microbiologists. Biological nitrogen fixation was discovered by the German agronomist Hermann Hellriegel and Dutch microbiologist Martinus Beijerinck. Biological nitrogen fixation (BNF) occurs when atmospheric nitrogen is converted to ammonia by an enzyme called nitrogenase. Nitrogenases are enzymes used by some organisms to fix atmospheric nitrogen gas (N2). There is only one known family of enzymes that accomplishes this process. All nitrogenases have an iron – and sulfur-containing cofactor that includes a heterometal complex in the active site (e.g., FeMoCo). In most species, this heterometal complex has a central molybdenum atom. However, in some species it is replaced by a vanadium or iron atom. Enzymes responsible for nitrogenase action are very susceptible to destruction by oxygen. Many bacteria cease production of the enzyme in the presence of oxygen. Many nitrogen-fixing organisms exist only in anaerobic conditions, respiring to draw down oxygen levels, or binding the oxygen with proteins.

For thousands of years farmers were aware that plants belonging to the legume family, such as peas and soy beans, promoted crop growth when planted with other non-legumes such as wheat. Growing a legume crop in a field could also result in the next year’s crop of non-legume plants giving a far greater yield. This led to the practice of crop rotation, a practice which can be traced back to techniques recorded in Roman literature. 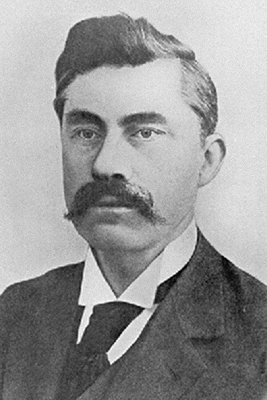 While the ancient Romans were aware of the improved results gained through crop rotation, they did not know that these benefits were brought about through the replenishment of nitrogen in the soil. Later people knew legumes did replenish nitrogen in the soil, but did not know how atmospheric (N2) was converted into ammonium (NH3) by legumes until research done in the 19th century. Hermann Hellriegel (1831-1895), a noted German agricultural chemist, discovered that leguminous plants took atmospheric nitrogen and replenished the ammonium in the soil through the process now known as nitrogen fixation. He found that the nodules on the roots of legumes are the location where nitrogen fixation takes place.

Hellriegel did not determine what factors in the root nodules carried out nitrogen fixation. Martinus Willem Beijerinck (March 16, 1851 – January 1, 1931), a Dutch microbiologist and botanist, explored the mechanism responsible, discovering that the root nodules contained microbes. He further demonstrated that these microbes were bacteria, which he named rhizobia. These rhizobia perform the chemical processes of nitrogen fixation. In addition to having discovered this biochemical reaction vital to soil fertility and agriculture, Beijerinck is responsible for the discovery of this classic example of symbiosis between plants and bacteria. The bacteria in the root nodules are needed to provide nitrogen for legume growth, while the rhizobia are dependent on the root nodules as a environment to grow.and a source of nutrition.

The conversion of N2 to NH3 depends on a complex reaction, essential to which are enzymes known as nitrogenases.

Biological nitrogen fixation (BNF) occurs when atmospheric nitrogen is converted to ammonia by an enzyme called nitrogenase. The reaction for BNF is: N2 + 8 H+ + 8 e− → 2 NH3 + H2. This type of reaction results in N2 gaining electrons (see above equation) and is thus termed a reduction reaction. The exact mechanism of catalysis is unknown due to the technical difficulties biochemists have in actually visualizing this reaction in vitro, so the exact sequence of the steps of this reaction are not completely understood. Despite this, a great deal is known of the process. While the equilibrium formation of ammonia from molecular hydrogen and nitrogen has an overall negative enthalpy of reaction (i.e. it gives off energy), the energy barrier to activation is very high without the assistance of catalysis, which is done by nitrogenases. The enzymatic reduction of N2 to ammonia therefore requires an input of chemical energy, released from ATP hydrolysis, to overcome the activation energy barrier.

A General Catalytic Mechanism Scheme for Nitrogenase: A) Components I and II are dissociated; II is ready for reduction. B) ATP binds to component II, which receives electrons from an electron donor (ferredoxin or flavodoxin); binding of ATP induces an allosteric conformational change which allows association of the two proteins. Electrons flow from the [4Fe-4S] cluster on II to the P cluster on I. C) Electrons are further shuttled to the iron-molybdenum cofactor (FeMoco), and ATP is hydrolised to ADP. This step is repeated several times before a molecule of N2 can bind to FeMoco. D) The protein complex dissociates, and nitrogenase reduces dinitrogen to ammonia and dihydrogen. Legend:I: component I (dinitrogenase; MoFe protein); II: component II (dinitrogen reductase; Fe protein); ATP: adenosine triphosphate; ADP: adenosine diphosphate; Fdx: ferredoxin; Fld: flavodoxin.

Nitrogenase is made up of two soluble proteins: component I and II. Component I known as MoFe protein or nitrogenase contains 2 Mo atoms, 28 to 34 Fe atoms, and 26 to 28 acid-labile sulfides, also known as a iron-molybdenum cofactor (FeMoco). Component I is composed of two copies each of two subunits (α and β); each subunit’s stability depends on the other in vivo. Component II known as Fe protein or nitrogenase reductase is composed of two copies of a single subunit. This protein has four non-heme Fe atoms and four acid-labile sulfides (4Fe-4S). Substrate binding and reduction takes place on component I, which binds to ATP and ferredoxin or flavodoxin proteins (Fdx or Fld) (see step B).

The hydrolysis of ATP supplies the energy for the reaction while the Fdx/Fld proteins supply the electrons. Note this is a reduction reaction which means that electrons must be added to the N2 to reduce it to NH4. Thus, the role of component II is to supply electrons, one at a time to component I. ATP is not hydrolyzed to ADP until component II transfers an electron to component I (see step C and D). 21-25 ATPs are required for each N2 fixed. The association of nitrogenase component I and II and later dissociation occurs several times to allow the fixation of one N2 molecule (see step B and D).

Nitrogenase ultimately bonds each atom of nitrogen to three hydrogen atoms to form ammonia (NH3). The nitrogenase reaction additionally produces molecular hydrogen as a side product, which is of special interest for people trying to produce H2 as an alternative energy source to fossil fuels.

Central to nitrogen fixation (N2 to NH3) are the enzymes that do the actual fixation, these are known as nitrogenases. Due to the oxidation carried out by oxygen, most nitrogenases, which are essential large reduction complexes are irreversibly inhibited by O2, which degradatively oxidizes the Fe-S cofactors. In essence, O2 binds to the iron (Fe) found in nitrogenases and blocks their ability to bind to N2. To protect nitrogenases, there are mechanisms for nitrogen fixers to protect nitrogenase from oxygen in vivo. One known exception is the nitrogenase of Streptomyces thermoautotrophicus, which is unaffected by the presence of oxygen. This is complicated by the fact the bacteria still need the presence of oxygen for proper respiration.

Some microbes have a proteoglycan rich extra cellular matrix which traps a layer of water, often referred to as a slime layer. This slime layer acts as a barrier for oxygen. The ability of some nitrogen fixers such as azotobacteraceae to employ an oxygen-amendable nitrogenase under aerobic conditions has been attributed to a high metabolic rate, allowing oxygen reduction at the cell membrane; however, the effectiveness of this mechanism is in question. 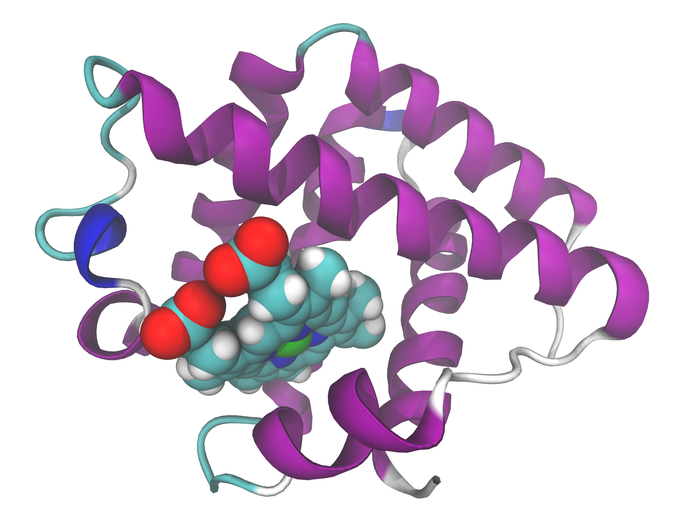 Leghemoglobin: Leghemoglobin, the protein which binds to oxygen, allowing nitrogenases to function in an oxygen free environment. The ribbons represent protein folds, while the conglomerate of spheres are the postion of the iron contain heme group which binds the oxygen.

Genetics and Regulation of N2 Fixation

Through control of gene expression, nitrogen fixing bacteria can turn on and off the proteins needed for nitrogen fixation.

Discuss the role of the nif genes in controlling nitrogen fixation 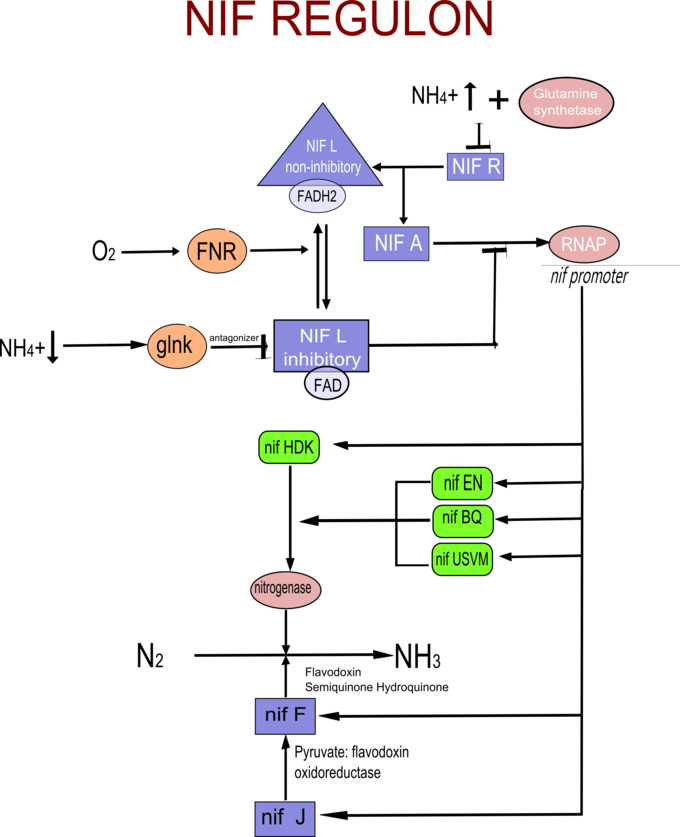 Nif Regulon: This is a schematic representing many of the proteins in the nif regulon and where they act in the pathway needed for nitrogen fixation.

The fixation of atmospheric nitrogen (N2) is a very energy intensive endeavor. If there is no need for N2 fixation, the production of proteins needed for fixation are tightly controlled. The nif genes are responsible for the coding of proteins related and associated with the fixation of atmospheric nitrogen into a form of nitrogen available to plants. These genes are found in nitrogen fixing bacteria and cyanobacteria. The nif genes are found in both free living nitrogen fixing bacteria and in symbiotic bacteria in various plants.

The nif genes are genes encoding enzymes involved in the fixation of atmospheric nitrogen. The primary enzyme encoded by the nif genes is the nitrogenase complex which is in charge of converting atmospheric nitrogen to other nitrogen forms such as ammonia, which plants can use for various purposes. Besides the nitrogenase enzyme, the nif genes also encode a number of regulatory proteins involved in nitrogen fixation. The expression of the nif genes is induced as a response to low concentrations of fixed nitrogen and oxygen concentrations (the low oxygen concentrations are actively maintained in the root environment). Nitrogen fixation is regulated by nif regulon, which is a set of seven operons which includes 17 nif genes. Nif genes have both positive and negative regulators. Some of nif genes are: Nif A, D, L,K, F,H S,U,Y,W,Z.

Activation of nif genes transcription is done by the nitrogen sensitive NifA protein. When there isn’t enough fixed nitrogen factor available for the plant’s use, NtrC, which is a RNA polymerase, triggers NifA’s expression. NifA then activates the rest of the transcription for the nif genes. If there is a sufficient amount of reduced nitrogen or oxygen is present, another protein is activated, NifL. In turn, NifL inhibits NifA activity, which results in the inhibition of nitrogenase formation. NifL is then regulated by other proteins that are sensors for the levels of O2 and ammonium in the surrounding environment.