The cyanobacteria, also known as blue-green bacteria, are a phylum of bacteria that obtain their energy through photosynthesis.

Describe the characterstics associated with Cyanobacteria including:  cell types, forms of motility and metabolic properties

Cyanobacteria, also known as blue-green bacteria, blue-green algae, and Cyanophyta, is a phylum of bacteria that obtain their energy through photosynthesis. The ability of cyanobacteria to perform oxygenic photosynthesis is thought to have converted the early reducing atmosphere into an oxidizing one, which dramatically changed the composition of life forms on Earth by stimulating biodiversity and leading to the near-extinction of oxygen-intolerant organisms. According to the endosymbiotic theory, chloroplasts in plants and eukaryotic algae have evolved from cyanobacterial ancestors via endosymbiosis.

DISTRIBUTION AND EFFECT ON ECOSYSTEMS

Cyanobacteria can be found in almost every terrestrial and aquatic habitat. Aquatic cyanobacteria are probably best known for the extensive and visible blooms that can form in both freshwater and the marine environment. These can have the appearance of blue-green paint or scum. The association of toxicity with such blooms has frequently led to the closure of recreational waters when blooms are observed. Cyanobacteria include unicellular and colonial species. Colonies may form filaments, sheets, or even hollow balls. Some filamentous colonies show the ability to differentiate into several different cell types, including: 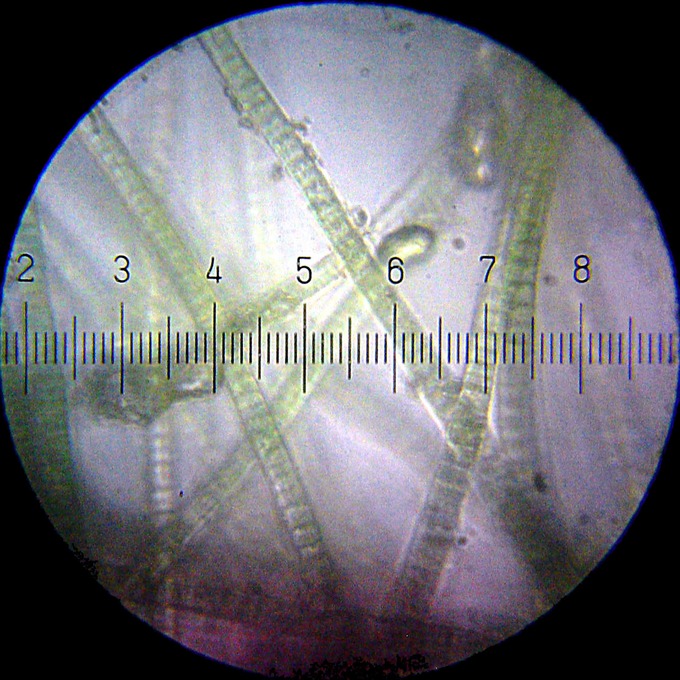 Cyanobacteria: Cyanobacteria, also known as blue-green bacteria, blue-green algae, and Cyanophyta, is a phylum of bacteria that obtain their energy through photosynthesis 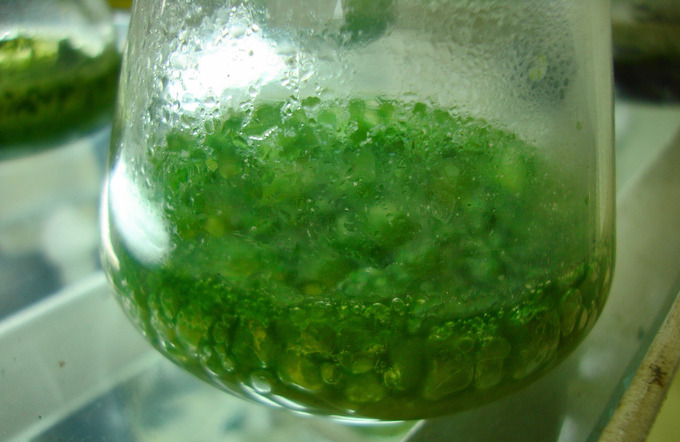 Heterocyst-forming species are specialized for nitrogen fixation and are able to bind nitrogen gas to ammonia (NH3), nitrites (NO−2) or nitrates (NO−3). These molecules can be absorbed by plants and converted into protein and nucleic acids.

Many cyanobacteria form motile filaments called hormogonia, that travel from the main biomass to bud and form new colonies elsewhere. The cells in a hormogonium are often thinner than those found in the vegetative state, and the cells on either end of the motile chain may be tapered. To break away from the parent colony, a hormogonium often must tear a weaker filament cell, called a necridium.

Individual cells of a cyanobacterium typically have a thick, gelatinous cell wall. They lack flagella, but hormogonia and some species may move about by gliding along surfaces. Many of the multi-cellular filamentous forms of Oscillatoria are capable of a waving motion; the filament oscillates back and forth. In water columns some cyanobacteria float by forming gas vesicles, like in archaea. These vesicles are not organelles as such. They are not bounded by lipid membranes but by a protein sheath.

PHOTOSYNTHESIS AND OTHER METABOLIC PROCESSES

Photosynthesis in cyanobacteria generally uses water as an electron donor and produces oxygen as a by-product, though some species may also use hydrogen sulfide as occurs among other photosynthetic bacteria. Carbon dioxide is reduced to form carbohydrates via the Calvin cycle. In most forms the photosynthetic machinery is embedded into folds of the cell membrane, called thylakoids.

Because of their ability to fix nitrogen in aerobic conditions they are often found in symbiontic partnerships with a number of other groups of organisms, including but not limited to fungi (lichens), corals, pteridophytes (Azolla), and angiosperms (Gunnera).

Many cyanobacteria are able to reduce ambient levels of nitrogen and carbon dioxide under aerobic conditions, a fact that may be responsible for their evolutionary and ecological success. The water-oxidizing photosynthesis is accomplished by coupling the activity of photosystem (PS) II and I (Z-scheme). In anaerobic conditions, they are also able to use only PS I—cyclic photophosphorylation—with electron donors other than water (for example hydrogen sulfide), in the same way as the purple photosynthetic bacteria.

The cyanobacteria were traditionally classified by morphology into five sections, referred to by the numerals I-V. The first three–Chroococcales, Pleurocapsales, and Oscillatoriales–are not supported by phylogenetic studies. However, the latter two–Nostocales and Stigonematales–are monophyletic, and make up the heterocystous cyanobacteria. Some cyanobacteria produce toxins, called cyanotoxins. This results in algal blooms, which can become harmful to other species including humans if the cyanobacteria involved produce toxins.

Some groups of bacteria can capture light energy and convert it to ATP without the production of oxygen through anoxygenic photosynthesis.

Describe the mechanisms that specific bacteria use to undergo anoxygenic photosynthetic bacteria, including: green sulfur and purple sulfur bacteria

The green sulfur bacteria are a family of obligately anaerobic photoautotrophic bacteria most closely related to the distant Bacteroidetes. They are non-motile with the exception of Chloroherpeton thalassium, which may glide. They come in sphere, rods, and spiral forms. Photosynthesis is achieved using bacteriochlorophyll (BChl) c, d, or e, in addition to BChl a and chlorophyll a, in chlorosomes attached to the membrane. The electron transport chain (ETC) of green sulfur bacteria uses the reaction centre bacteriochlorophyll pair, P840. When light is absorbed by the reaction center, P840 enters an excited state with a large negative reduction potential, and so readily donates the electron to bacteriochlorophyll 663 which passes it on down the electron chain. The electron is transferred through a series of electron carriers and complexes until it either returns to P840 or is used to reduce NAD+. If the electron leaves the chain to reduce NAD+, P840 must be reduced for the ETC to function again. The green sulfur bacterias’ small dependence on organic molecule transporters and transcription factors indicates that these organisms are adapted to a narrow range of energy-limited conditions, and fit into an ecology shared with the simpler cyanobacteria, 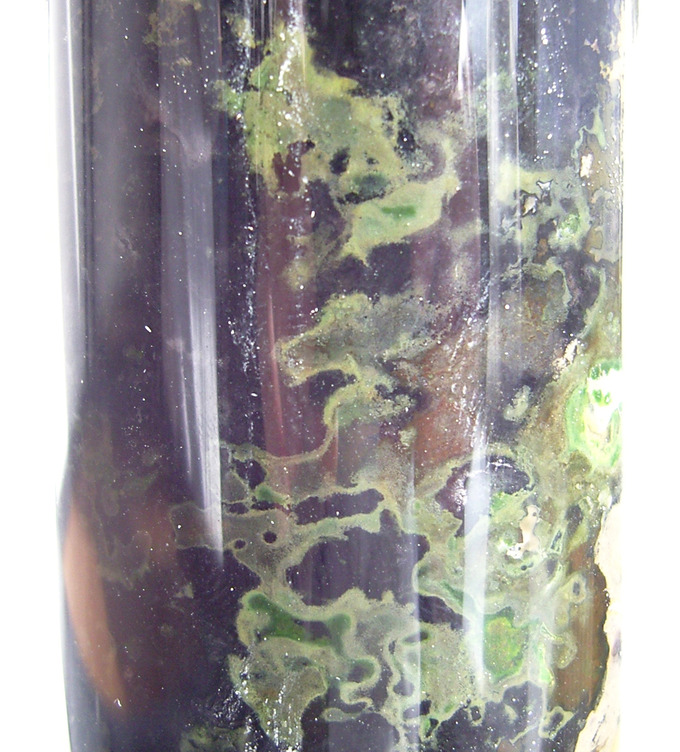 The purple sulfur bacteria are a group of Proteobacteria capable of photosynthesis. They are anaerobic or microaerophilic, and are often found in hot springs or stagnant water. Unlike plants, algae, and cyanobacteria, they do not use water as their reducing agent, and so do not produce oxygen. Instead, they use hydrogen sulfide, which is oxidized to produce granules of elemental sulfur. This in turn may be oxidized to form sulfuric acid.The purple sulfur bacteria are divided into two families: the Chromatiaceae and Ectothiorhodospiraceae, which respectively produce internal and external sulfur granules, and show differences in the structure of their internal membranes.

Purple sulfur bacteria are generally found in illuminated anoxic zones of lakes and other aquatic habitats where hydrogen sulfide accumulates. They are also found in “sulfur springs” where geochemically or biologically produced hydrogen sulfide can trigger the formation of blooms of purple sulfur bacteria. Anoxic conditions are required for photosynthesis; these bacteria cannot thrive in oxygenated environments. The electron transport chain of purple non-sulfur bacteria begins when the reaction center bacteriochlorophyll pair, P870, becomes excited by the absorption of light. Excited P870 will then donate an electron to Bacteriopheophytin, which then passes it on to a series of electron carriers down the electron chain. In the process, it will generate a proton motor force (PMF) which can then be used to synthesize ATP by oxidative phosphorylation. The electron returns to P870 at the end of the chain so it can be used again once light excites the reaction-center.

Picoplankton is the fraction of plankton which can be photosynthetic or heterotrophic.

Describe the characteristics associated with Prochlorophytes, a member of the Picoplankton

Picoplankton is the fraction of plankton, composed by cells between 0.2 and 2 μm, that is either photosynthetic (photosynthetic picoplankton; ) or heterotrophic (heterotrophic picoplankton). Some species are also mixotrophic. Picoplankton are responsible for the majority of the primary productivity in oligotrophic gyres, and are different from nanoplankton and microplankton. Because they are small, they have a greater surface-to-volume ratio, which enables them to obtain scarce nutrients in these ecosystems. 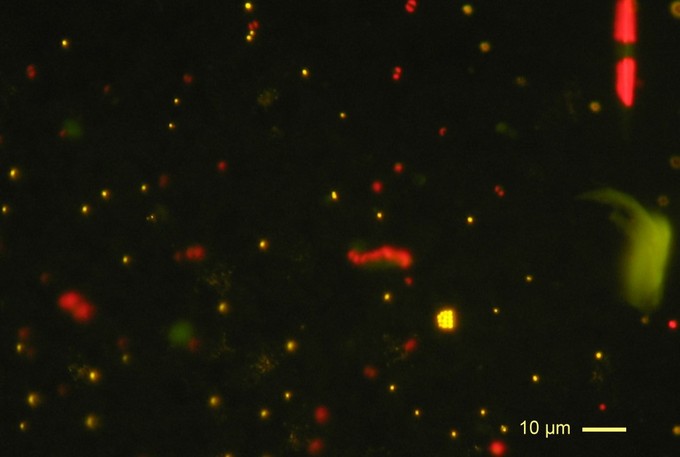 Prokaryotes vs. Eukaryotes: Picoplankton observed by epifluorescence microscopy, a technique which allows the detection of certain groups of cells possessing fluorescent pigments; and example would be Synechococcus, which possess phycoerythrin

Prochlorophyta are a photosynthetic prokaryote member of the phytoplankton group Picoplankton. These oligotrophic organisms are abundant in nutrient-poor tropical waters and use a unique photosynthetic pigment, divinyl-chlorophyll, to absorb light and acquire energy. These organisms lack red and blue Phycobilin pigments and have staked thylakoids, both of which make them different from Cyanophyta ( Cyanobacteria ). Prochlorophyta were initially discovered in 1975 near the Great Barrier Reef and off the coast of Mexico. The following year, Ralph A. Lewin, of the Scripps Institution of Oceanography, assigned them as a new algal sub-class.

In addition to Prochlorophyta, other phytoplankton that lack Phycobilin pigments were later found in freshwater lakes in the Netherlands, by Tineke Burger-Wiersma. These organisms were termed Prochlorothrix. In 1986, Prochlorococcus was discovered by Sallie W. Chisholm and his colleagues. These organisms might be responsible for a significant portion of the global primary production.

Prochlorophytes are very small microbes generally between 0.2 and 2 µm (Photosynthetic picoplankton). They morphologically resemble Cyanobacteria, formally known as Blue Green Algae. Members of Prochlorophyta have been found as coccoid (spherical) shapes, like Prochlorococcus, and as filaments, like Prochlorothrix.